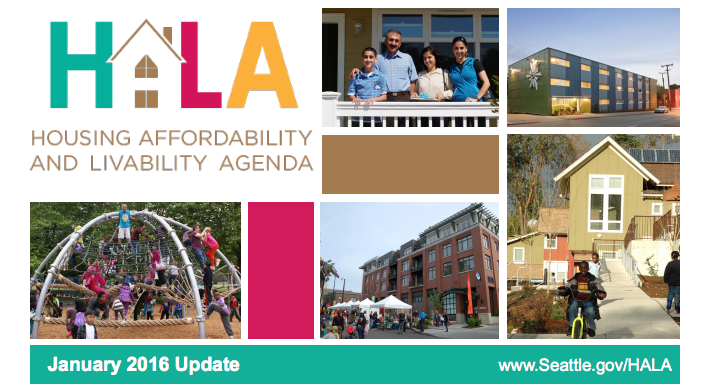 In Tuesday’s meeting of the Planning, Land Use, and Zoning (PLUZ) Committee, Councilmembers heard from City staff on continued outreach and engagement efforts for the Housing Affordability and Livability Agenda (HALA) process in 2016. Staff laid out the timeline of key HALA items that the City will tackle throughout the year.

A final draft of the legislation will be transmitted to Council later this month with adoption likely sometime in March.

Two pieces of legislation will be introduced to Council in March. The first is source-of-income discrimination prevention and the second is the Housing Levy.

Under City law, it is already illegal for landlords to discriminate against tenants who receive housing benefits through the Section 8 voucher program. The new legislation would expand the scope of the anti-discrimination law to include renters that receive income from sources like Social Security, child support, Supplemental Security Income, veteran’s benefits, and more.

The Housing Levy is set to expire at the end of 2016, but Mayor Ed Murray hopes that voters will reauthorize it. The size of the seven-year levy is slated to  double from the current  $145 million to $290 million. The HALA recommendations explicitly endorsed reauthorization of the levy and a substantial increase to address the needs of at-risk families, seniors, and people with disabilities by providing rental assistance and preserving affordable housing. The new levy would build upon the success of existing levy to deliver even more social and affordable housing to Seattle residents.

Both pieces of legislation could be approved sometime in April.

Council will see the Mandatory Housing Affordability-Residential (MHA-R) framework, one of the key pieces of HALA legislation, around the second quarter of the year. The MHA-R will require that new multifamily residential developments either pay a fee or build affordable housing units for low-income households. This will build upon the Commercial Linkage Fee passed in November and form the second component of the Mandatory Housing Affordability toolkit. However, the Commercial and Residential components of the MHA framework won’t be implemented until rezones increasing development capacity are realized. The first rezones that will be subject to the framework could happen this year with the passage of zoning change in South Lake Union and Downtown sometime in the early summer.

Separately, City staff are actively lobbying the State Legislature for authorization to enact a local affordable housing property tax exemption program (aka the Preservation Tax Exemption). Essentially, the program would help preserve some of the city’s existing rental housing stock at affordable rates. Property owners could partake in property tax exemptions by allocating a certain percentage of their units as affordable when they upgrade the property. The bill (SB 6239/HB 2544) is still alive and could find itself enacted due to bipartisan support.

At the meeting, Councilmember Rob Johnson asked staff about the conceptualized urban village boundary expansions as part of Seattle 2035. Johnson, who represents District 4 in Northeast Seattle, noted that many community members have expressed great interest in how the expansions might occur, particularly with regard to geographic location and the type of bulk and scale of development that could be allowed.

Jesseca Brand, a Department of Neighborhoods staffer, responded by saying that the planners spearheading the Seattle 2035 comprehensive plan update heard two primary things from people. Firstly, that people strongly support adding growth where transit service is readily available. And secondly, people are asking how HALA fits into all of this. Brand said that it was her understanding that planners will “slow those boundary changes down until [Seattle] can have the HALA conversation about what that would look like inside of those boundaries.” Brand also said that the next important step really is the MHA-R framework and that more refined planning processes would follow.

Councilmembers then pivoted discussion on when they might receive rezone legislation this year in relationship to HALA. Brand noted that the rezone proposals for South Lake Union and Downtown Seattle would be handed to Council in May or June. The MHA-R legislation would be transmitted around the same time, but Council would withhold passage of the rezone proposals until MHA-R is passed to establish the full HALA inclusionary housing framework. Additional rezone proposals for the University District and the Central District may also enter Council chambers this year as well, but other neighborhood rezone discussions wouldn’t begin until later this year nor would they be enacted before 2017.