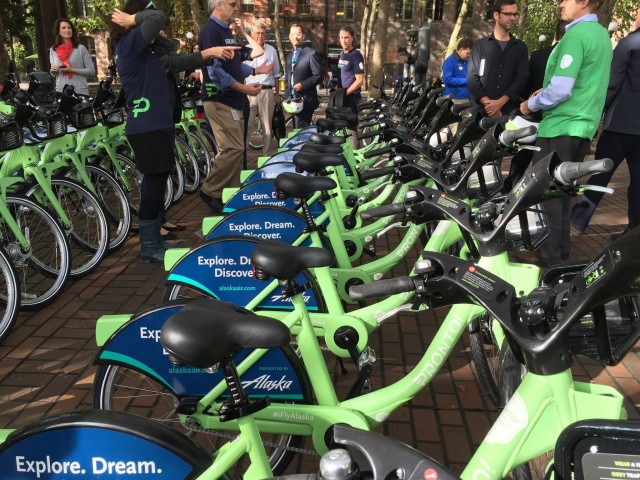 Update: At the March 1 transportation meeting, Lisa Herbold’s anti-Pronto amendment was defeated in a 1-5 vote, but Mike O’Brien’s amendment to buy out Pronto ended in a 3-3 tie with Debora Juarez and Tim Burgess joining Herbold in opposition. This means that the bill will go to the full council meeting at 2 p.m. on March 14 without recommendation and all amendments still on the table. The three members supporting the city buyout of Pronto (O’Brien, Rob Johnson and Kshama Sawant) will need to find two more supporters to pass the bill. Lorena Gonzalez, Sally Bagshaw and Bruce Harrell were not at the transportation meeting but their votes will likely ultimately decide Pronto’s fate.

Further update (!): Deborah Juarez actually voted yes at the meeting on Tuesday, but her voice vote was recorded incorrectly. This means that the bill goes to the Full Council with a “recommendation to pass”.

Councilmember Lisa Herbold (West Seattle) is on the fiscal conservative warpath. She is seeking to scuttle Pronto Bike Share, to sell off its assets to repay federal grants, to let the private sector fill the vacuum (or not), and to bravely defend a few on-street parking spots from bike share station encroachment. Wouldn’t want dozens of cyclists using street space that could store one single occupant vehicle! Councilmember Burgess agreed, piling on in a post that called the program “insolvent.” Councilmember O’Brien, on the other hand, supports investing $1.4 million in city funds to buy Pronto Cycle Share from Puget Sound Bike Share, the non-profit that owns it. Herbold and Burgess think they are saving the city in immediate costs and in future liabilities because they’re convinced Pronto is insolvent after just seventeen months of operation and that it will remain so.

Profitability is an unreasonable expectation for such a fledgling system with poor station placement. Build a mature system with logical station placement and robust coverage then talk about return on investment. To pull the plug and not invest needed public funds would be a imprudent knee jerk reaction. Public ownership also comes with much more control of station placement and the ability to expand the system in areas that might not be very profitable, but meet equity goals. Herbold’s own West Seattle comes to mind, as do far north neighborhoods like Bitter Lake and Lake City. A profit-seeking private bike share would not be going to these far flung neighborhoods any time soon.

We need to invest in Pronto. Seattle had a mere 54 (poorly placed) stations but still managed more than 144,000 trips in its first 12 months. Not bad. More mature systems have done much better (but not in their first year). Minneapolis/Saint Paul’s Nice Ride system had 170 stations and 1,556 bikes in 2014 and saw 408,485 total trips. In its first 12 months, Nice Ride saw about 138,000 trips. Denver B-cycle had 377,229 trips in 2014 on its 84 stations and 709 bikes. In its first year (2010), Denver managed 102,159 trips, but almost doubled that total in its second year. Seattle’s first 12 months was actually better than what Minneapolis and Denver achieved. Our problem stems from unreasonable expectations and a tightwad city council trying to throw in the towel at the slightest sign of trouble.

Larger cities have another magnitude of ridership. Chicago Divvy increased their system to 475 stations and 4,750 bikes in 2014 and saw more than 3 million trips. The start-up cost of Chicago’s extensive system was $31.5 million, $25 million of which came from federal grants. That puts Seattle’s hand-wringing over much smaller investments in perspective.

New York City’s CitiBike surpassed 10 million trips in 2015 using 460 stations and 7500 bikes. CitiBike took about $50 million to initially launch, $10 million to replace Hurricane Sandy damage and another $50 million to build out. Quite the investment but it’s hard to argue with 10 million rides. Yes CitiBike’s money came from the private sector, as Herbold cites; but Seattle doesn’t have corporations stepping up right now to fill the funding gap. The option is public money or risking the death of Pronto.

Seattle needs to follow the lead of other major cities and expand its bike share network. Private investment can continue to play a big part, but the city needs to step up to invest in more stations and bikes and in improving bicycle infrastructure to allow users to travel in greater safety and comfortable. The Move Seattle levy promises to add more protected bike lanes. We have to build on that momentum by expanding bike share coverage, especially where bicycle and transit infrastructure is the strongest. There shouldn’t be a light rail station in Seattle without an adjacent Pronto station, at least once we expand the Pronto network.

One item increasing Pronto’s cost is the helmet rental system. King County has a mandatory helmet law, which behooved Pronto to invest in helmets and helmet dispensing technology. Now users can pay $2 to rent a helmet at a Pronto station. This would all be well and good if Pronto was sitting on a pile of cash and could afford the extra expense of operating a helmet rental service. However, obviously finances are tight and it’s regrettable that Pronto is being made to defend it’s profitability when it’s had some so many obstacles in its path.

Writing an exception into the helmet law for bike share users is one option. (I’d personally support getting rid of the helmet law entirely.) Much research indicates safety in numbers does more to increase bicyclist safety than mandatory helmet laws do. The problem is helmet laws discourage bicycling, trading the safety in greater numbers for a piece of armor for collisions. Since collisions happen at a greater rate with fewer bicyclists on the street, helmet laws help worsen the problem they seek to address. If King County is going to continue to impose the extra burden of helmet rental into Seattle’s bike share program, we have to accept the consequence, which is a higher cost system that is harder to market to users.

Speaking of obstacles: one argument against Pronto is that Seattle is simply too hilly to support casual bike riding. That is a cop out given the haphazard roll out of Pronto. Seattle could still have a healthy system with the right station placement and infrastructure. Major bike routes on hills should have protected bike lanes if at possible to make it more comfortable to huff it uphill. Hills are not an insurmountable obstacle and they should be the scapegoat for the under-performance of an underfunded, poorly-distributed bike share network. Pronto users did prefer downhill trips to uphill trips with about 80,000 downhill rides to 50,000 uphill rides. That doesn’t suggest uphill rides are a deal-breaker, just less popular. If a portion of users want to bike down hill and bus back up the hill, the bike share system should accommodate them. It also makes sense that in the first year downhill rides would take a larger share of trips since many users are still getting acclimated to the new system.

Other cities have justified their bike share investments by highlighting the vehicle miles traveled (VMT) savings. VMT savings mean less wear and tear on the road because of the simple fact a two ton car does much more damage to a roadway than a 15 pound bike. Thus, shifting more trips to bikes from car trips on a particular street means it could need less frequent maintenance saving the city millions in maintenance costs. This has been absent from Seattle’s discussion of bike share.

Council members Herbold and Burgess are dead set on the penny-wise but pound-foolish decision to scuttle Pronto. They would be “saving” a few tax dollars now in exchange for pushing more people into motor vehicles where they do greater damage to the roadways and incur maintenance costs that dwarf the minimal investment Pronto needs. Herbold, a self-styled progressive, follows right-wing thinking that bicycling is frivolous, bike-shares are a big waste of city money, the private sector can do it better just because, and the only thing that matters is the bottom line, not the social benefits of a program. Herbold’s backup plan of waiting for Pronto to go bankrupt before buying it out is reckless. I hope cooler heads prevail at today’s 2:00 p.m. transportation committee meeting.