On Monday March 28th, the first weekday of King County Metro’s biggest service change in years, South Lake Union will see a pretty big increase in transit service. The South Lake Union Streetcar will be increased to 10-minute frequency from 7 am to 7 pm. RapidRide route C, with its decoupling from the D line, be extended to terminate near Fred Hutchinson Cancer Research Institute. And the route 40 will move from being on 9th Avenue N southbound to Westlake Avenue N, the street it uses northbound. Westlake Avenue will jump into the ranks of Pine Street and 3rd Avenue in terms of frequency of available transit.

The northbound bus & streetcar stop at Westlake and Denny will see an increase in buses per weekday from 153 to 288 buses serving it. During the 8 a.m. hour, 22 buses will serve that stop, up from only 9. The bus stops that will handle all of these extra double-articulated buses have been enlarged, and the stops themselves have been raised to speed boarding where before the bus might have had to kneel.

But the centerpiece of the corridor is converting the curb lane on both sides of Westlake Avenue from general purpose to transit only for almost the entire corridor.

Here is SDOT’s graphic showing the changes in the corridor (click to enlarge): 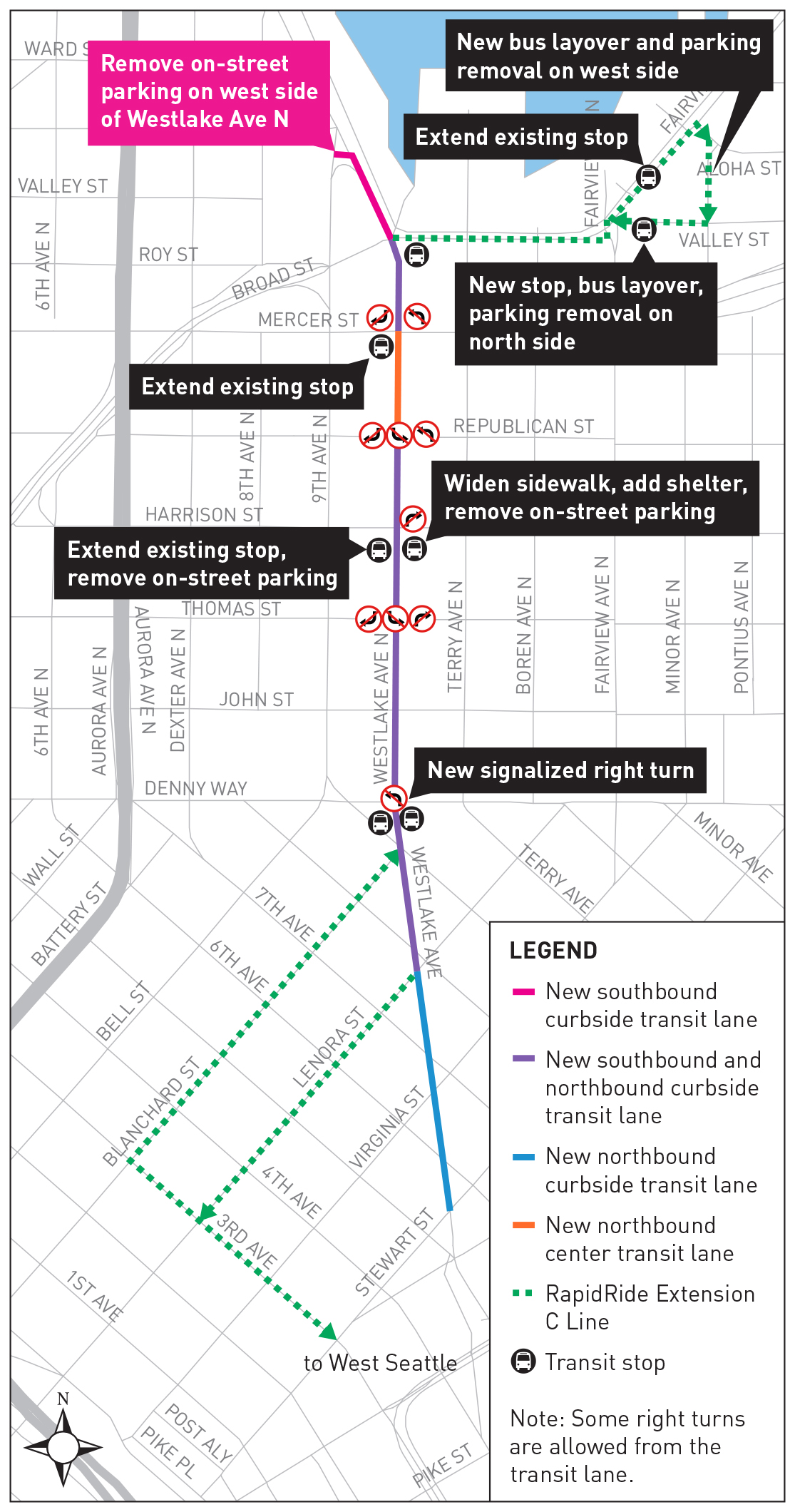 An investment in South Lake Union transit service on this scale means that our transportation leaders are waking up to the fact that service to the booming northern segment of downtown has been lagging behind service to the downtown core for a while. A 2014 study by Commute Seattle showed that while 31% of downtown workers drive alone to work, in South Lake Union that number was 46%. As much as this may be a reflection on available parking and daytime rates, it is at least partly a reflection on availability of transit service.

However, as changes begin to be implemented along the corridor, transit advocates have become increasingly concerned with the fact of these changes might not go as far as they might to ensure streamlined transit service throughout the corridor.

In looking at the alternatives, SDOT estimated impacts on travel times on transit routes that will not have the benefit of the transit lanes on Westlake. The Metro route on Denny Way, the route 8, was estimated to see a 15% increase in delay at the intersection with the alternative chosen, namely the forced right turn. Service on Dexter would also see a 35% increase but the routes listed by SDOT, the 26 and 28, will be moving to Aurora to be replaced by local service on the new route 62, so it is unclear how those numbers will look after that change.

We have written about plans to help the very infamously unreliable and stuck-in-traffic route 8. These plans are still several years down the road, and it looks as if SDOT has just given the route 8 a serious setback toward reliability on this route. Signals on Denny were retimed recently in conjunction with this project, but dumping more traffic from Westlake onto Denny is only going to hurt the 8.

Investing in transit in South Lake Union deserves to be done thoroughly and effectively. Commuters in the neighborhood might question the idea of adding so much transit service if the infrastructure they were promised is not quite living up to the expectations that were set when the project was announced. At the very least, SDOT should monitor this corridor closely after the service change begins at the end of March and act proactively to make sure that it is doing everything it can to move transit quickly through the area. SLU should not be left with transit infrastructure that is only “good enough”.