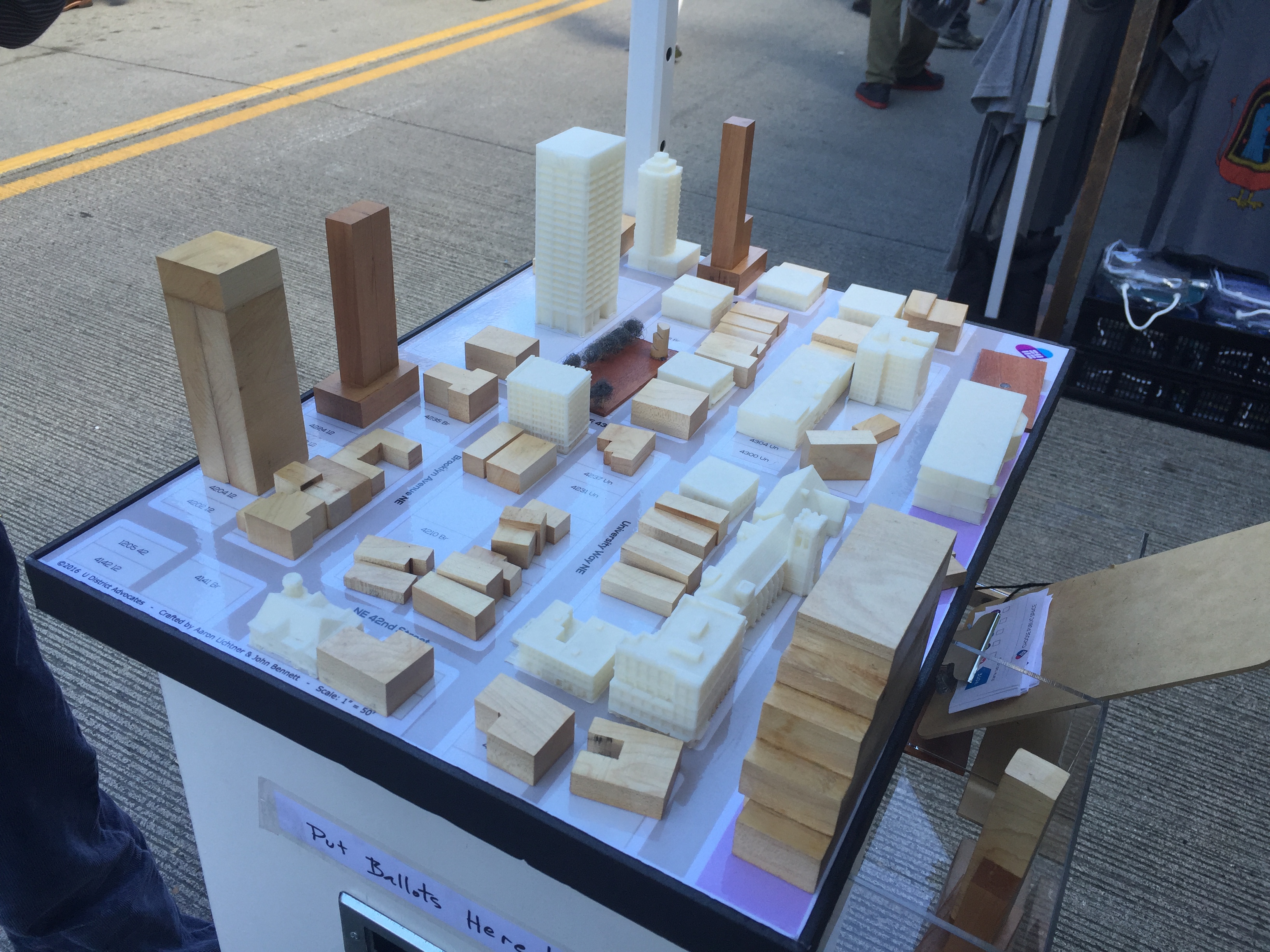 This morning, the Office of Planning and Community Development (OPCD) released draft zoning and development regulations as part of a package of recommendations for the University District. The proposal comes after nearly five years of a public process identifying neighborhood priorities and strategies to accommodate more residents, jobs, and amenities in a district slated to see the arrival of light rail in 2021. The proposal is built around three broad policy areas:

It’s important to understand the context of the University District and the process. Located just north of the Ship Canal, the University District is one of Seattle’s six urban centers and uniquely known as the home of University of Washington. Some 14,000 residents, 6,000 employees, and tens of thousands of students are directly associated with the district. Over the past decade, the face of the district has been rapidly changing as new development has unleashed more housing, employment, and university-related uses. OPCD anticipates that this will continue even under existing zoning and development scenarios, but a larger process considered how the neighborhood could accommodate additional development capacity near the center of the neighborhood through the University District Urban Design Framework (UDUDF). The UDUDF evaluated a variety of alternative scenarios for additional capacity and concluded that under maximum rezone scenarios, up to 5,000 new dwelling units and 4,800 new jobs could be added over baseline zoning allowances.

OPCD is recommending a suite of rezones throughout the University District. In the core area of the district (blocks closest to the future light rail station and near primary streets like Roosevelt Way NE and NE 45 St), could see increased maximum height limits between 280 and 320 feet. Beyond these core blocks, allowed heights would drop considerably in a wedding cake fashion, transitioning to a general maximum height limit of up to 75 to 85 feet.

University Way NE (The Ave), the neighborhood’s primary shopping street, south of NE 45th St would allow two additional floors of height (85 feet versus 65 feet) over today, despite being sandwiched between 320-foot and 240-foot zones on either side. Community input throughout the process was very consistent on retaining the lowrise, small storefront character of the district. More measured heights will likely ensure that these characteristics are retained, even through new development.

Only three properties with single-family residential zoning (SF-5000) are proposed to be rezoned; these include Blessed Sacrament Church and Priory, Cowen Park Grocery, and The Park Ravenna Apartments, which are at the fringe of the University District Urban Center. The remainder of the parcels up for change all contain either commercial or multi-family residential zoning.

Notably, Neighborhood Commercial (NC) zoning is split between standard NC and NC with a P-designation. On blocks where the P-designation applies, special requirements for street level uses, minimum FAR, parking restrictions, and transparency apply so as to provide active pedestrian-oriented environments. The rezone also introduces a new zone: Seattle Mixed-University District (SM-U). The SM-U zone is similar to other SM zones across the city, but there would be specific neighborhood requirements attached to properties with the zoning designation. SM zones encourage a mix of residential and non-residential uses with allowances for some highrise development. A portion of the SM zone could place special emphasis on residential development with the SM-U/R 85-240 designation. The wonky designation essentially means that non-residential uses could not account for more than 5% of a building’s total square foot.

The overall rezone proposal is remarkably similar in nature to the one that we previously covered in December. The main differences are that rezones were dropped from two areas and increased height was added to specific areas. One of the area blocks was already zoned as proposed while the Roosevelt Way NE blocks (zoned NC2-40, previously proposed for NC3-65 zoning) was simply removed from further consideration.

OPCD is proposing a broad set of development regulations to control the form and amenities of new development. The following are just a few of the regulations that could be adopted:

The rezone is slated to take place after the adoption of Mandatory Housing Affordability (MHA) requirements for residential development (commercial requirements were adopted last year). The primary purpose for waiting is so that the rezone can unlock the MHA requirements which are pegged to increases in development capacity (rezones). In the map below, the rezone would mean that all properties located within the sector identified as A and B would be subject to MHA requirements while the C sectors could follow on in separate citywide rezones in 2017.

OPCD estimates that between 439 and 745 affordable housing units could be developed over the next 20 years as a result of the University District rezone and MHA program.

The proposal also contains a variety of incentives to allow additional development on rezoned sites throughout the neighborhood. Under the proposal, for instance, SM-U zones would have a general base maximum height of 85 feet and Floor Area Ratio (FAR) limit of 4.75. Developers would have to offer certain public benefits in order to unlock additional height and FAR above the base allowances. Examples of incentives that planners are contemplating, include: Green Street setbacks, neighborhood open space, mid-block corridors, Green Street right-of-way improvements, and transfer of development rights from neighborhood landmark structures. For commercial development, a minimum of 65% of the extra floor area allowed through incentive zoning would have to come from childcare facilities (similar to Downtown Seattle). And to even qualify for incentive zoning, development proposals would have to achieve a LEED Gold certification standard and provide a comprehensive Transportation Demand Management plan.

Next week, we’ll provide further in-depth analysis of the policy areas that this proposal touches on.

Opportunities To Learn And Weigh In

City staff will hold a community open house on Tuesday (May 31st) to discuss the background of the UDUDF process and policy proposals associated with the rezone. Four neighborhood drop-in sessions will follow in June where residents, business owners, and other interested parties can speak to planners one-on-one. Throughout the public review process, individuals can provide their feedback and ask questions by contacting the via e-mail at udistrict@seattle.gov.

Thursday, June 16, 9am to 11am
Café Allegro
4214 University Way NE (entrance from the alley behind Magus books)