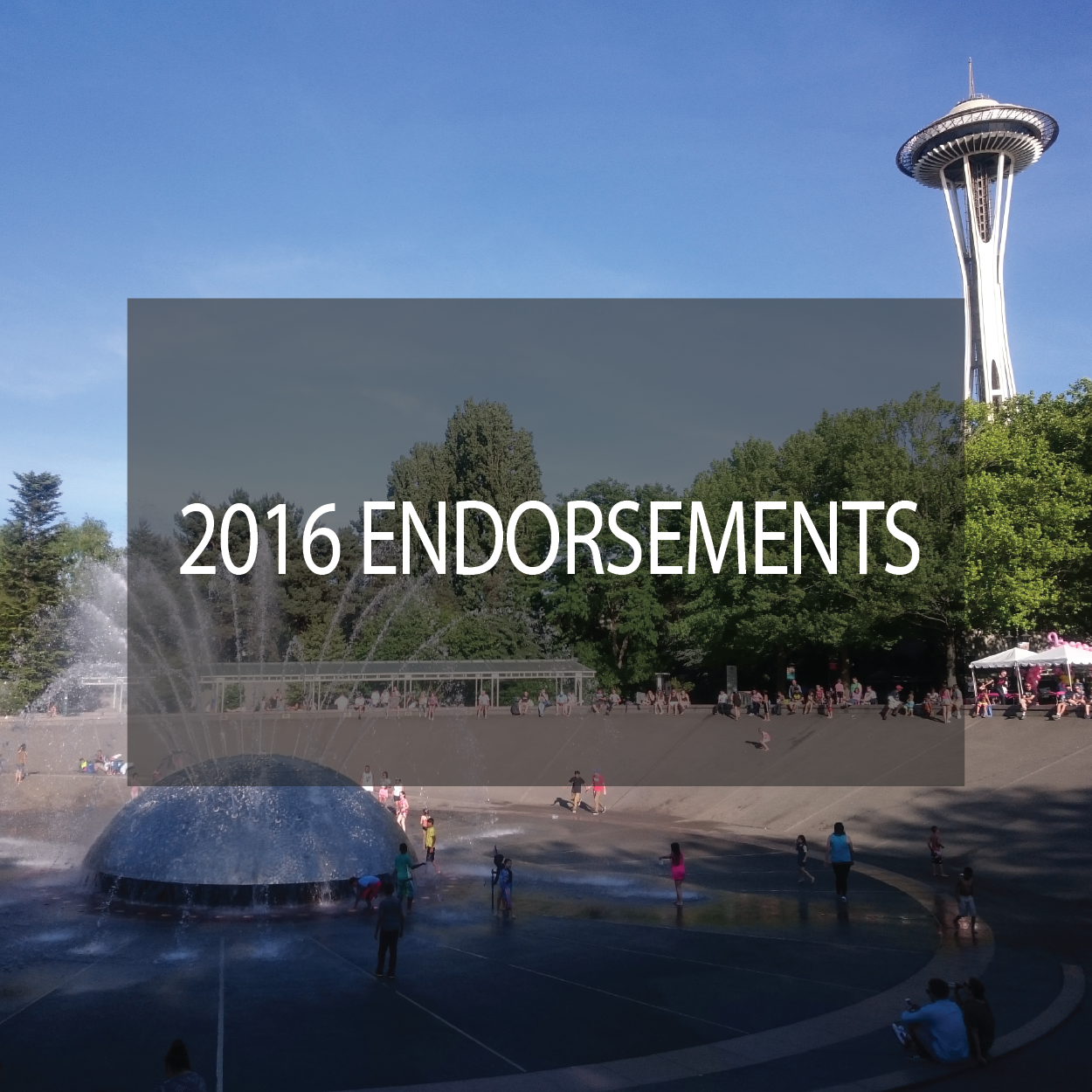 The 2016 election has shown itself to be historically consequential for setting the direction of both our region and country. We are facing critical issues that test our system at its foundation. But we have risen to the occasion. Our elected officials are celebrated across the country for their well-reasoned, boundary-pushing policies. The people we elect will be joining the upper echelon and must be ready for the challenge. We take that call seriously.

For that reason, we are proud to release our endorsements for the 2016 primary election on four key local campaigns, including two ballot measures and two races. These votes will impact the vision of our waterfront, the affordability of our housing, the investments in our infrastructure, and our continued national leadership. We looked for the best policies and advocates to represent true urbanist values. You can read more about how we did that here.

We’d like to thank all of the candidates who participated in our endorsement process and hope our readers will find the information and thoughts below to be useful when casting their votes.

The field of candidates in the 43rd Legislative District is very robust, and includes several candidates who present a strong case for themselves as urbanists. Nicole Macri, however, stands out in this field as having the strongest background to hit the ground running in the state legislature. As Deputy Director of the Downtown Emergency Service Center and President of the Board of Directors of the Low Income Housing Alliance, she has been on the front lines of Seattle’s housing crisis. Elevating one of Seattle’s key players in the fight against homelessness to the state level is a smart move. Seattle is in the middle of a state of emergency on homelessness, but this issue will only be solved regionally and systematically with the full involvement of all levels of government.

It is clear that Nicole has demonstrated the skillset necessary to succeed in Olympia, and her positions on a wide variety of urban issues, from her support for finding less volatile funding sources for public transit, to her endorsement of a carbon tax to help mitigate the effects of climate change, have earned her our endorsement. We see Nicole fighting for the 43rd Legislative District in the state legislature for years to come. Vote Macri.

With the retirement of Jim McDermott, the 7th Congressional District will see a new representative for the first time since 1989. The Urbanist endorses the candidacy of Brady Walkinshaw. Walkinshaw grew up in rural Washington and worked professionally on sustainable food systems. He was appointed to (then) Representative Jamie Pedersen’s seat in the state house in 2013 and then won election to the same seat in 2014.

Through his questionnaire and interview process, Walkinshaw showed his willingness to take an urban agenda to the United States Congress. In regards to highways, he voiced opposition to expansions in urban areas as well as a willingness to dedicate right-of-way to modes other than cars, including rail. He also is willing to rethink how zoning is done in cities. He showed a willingness to use the power of the federal government to push for more equitable and sustainable zoning and housing. During the interview, he also mentioned the failure of the federal government to focus on urban priorities and indicated that the district should represent that need.

We believe Walkinshaw would be an advocate for more equitable and sustainable cities and we encourage our readers to vote for him in the fall.

Read Brady’s endorsement survey answers. Visit Brady’s campaign website here. Pramila Jayapal was not eligible for endorsement because she did not respond to requests to complete the questionnaire.

Proposition 1 will double the current housing levy and is a slam dunk. Seattle is in the midst of a severe housing crisis with many people becoming priced out of the city and record numbers of people experiencing homelessness. Renewing and doubling the housing levy is a tangible step to really help those who need it most. The 2009 Housing Levy invested $145 million over seven years. The 2016 levy would build upon the success of the last and invest $290 million over the next seven years. It includes:

Opponents have raised concerns about how efficiently the City is spending levy dollars, but the reality is that rising construction costs and the skyrocketing price of land is affecting non-profit housing providers too, and we could very well end up paying a higher price per unit price than in previous levies. This isn’t grounds to oppose the bill measure; it’s a reflection of our current real estate market, the very reason we need the levy in the first place.

Seattle is a wealthy city. Doubling the housing levy is a statement that we won’t turn our back on making sure that all Seattleites can afford to live in the city, close to where they work and where services are. Vote YES on Seattle Proposition 1 (Housing Levy).

We strongly oppose Initiative 123’s effort to derail a decade of progress on transforming Seattle’s waterfront. The plan would rebuild a 50-feet tall, one-mile long pedestrian bridge along the waterfront where the crumbling Alaskan Way Viaduct stands today. The main justification for the campaign? The views afforded by a piece of highway infrastructure that has divided Seattle from its bustling waterfront for more than 60 years.

Kate Martin, the campaign leader, ran for Seattle mayor in 2013 on a platform that included a vision of preserving the Alaskan Way Viaduct as a park akin to the High Line in New York—a project with a much different scale and context. Losing with less than two percent of the absolute vote total, the idea clearly didn’t resonate with the public. And an engineering study found that preserving the viaduct was impossible, prompting the campaign’s main backer, developer Martin Selig, to pull his support.

The proposal is now to rebuild the viaduct as a towering “garden bridge” that will require 1,000-feet long ramps and outdoor elevators to access. This would blockade the effort to reactivate our city’s waterfront with parks, pedestrian and bicycle promenades, and redevelopment of private properties.

Seattle’s waterfront designer, James Corner, designed the very same High Line that I-123 aspires to become. And even he calls the proposal a “dumb idea”. And in placing I-123 on the ballot, the Seattle City Council noted the measure is “…inconsistent with the Strategic Plan, Central Waterfront Concept Design and Framework Plan, and the Funding Plan for the Waterfront…and undermines the vision for Waterfront Seattle”.

That’s enough for us to endorse a NO vote on Initiative 123.

Read our previous articles (one, two) on the Park My Viaduct and I-123 campaign.