Not another day goes by without some transit detractor talking about how driverless vehicles will obviate the need for transit and big spending on capital projects. Such statements are based on an expected improvement in travel by personal car, but they fail to account for the vast improvement in transit travel that will also result from this technology. It really comes down to three aspects of transit:

Nothing affects transit ridership like frequency. Consistent high frequency means one can depend on a transit line at any time of the day, and can get moving without delay. This brings transit closer to the utility of a personal vehicle. Frequent service allows more people to ditch the car for a trip or even permanently.

Today frequency is expensive and usually becomes available only for lines that already have high ridership. It is typically used only during rush hour to move the crowds rather than consistently across the day. When demand drops down in off-peak times agencies tend to use smaller buses–40-foot as opposed to 60-foot articulated–but no shorter. To accommodate further drops in demand agencies tend to just reduce the frequency of a route. Since around half of the operating cost of a bus is labor, the savings in fuel and maintenance wouldn’t allow for much higher frequency on a smaller vehicle.

Yet, driverless technology changes that. If labor is no longer part of the operating cost of a bus, one can scale that cost within a much greater range. One can make a decision that frequency will be constant at a vehicle every 5 minutes all day long and to keep the cost per rider constant, run ever smaller vehicles as demand goes down in off-peak times. Every 5 minutes in rush hour? Yes, still a 115-person 60-foot bus. Every 5 minutes at midnight? Probably an 8-person van or a minibus. At 3am? The same minibus waiting in a layover bay for the first passenger on the line to request it.

People cite that driverless cars will allow for cheaper ride-hailing services that can better compete with transit. Yet, as long as they are single-occupancy they won’t be any cheaper than a car you drive yourself. I am purposefully excluding cars which one shares with random other people (e.g. Uber Pool or Lyft Line) because that is in fact a form of mass transit with very small vehicles. The vehicle size on such services would only depend on corridor demand and could be scaled up within certain constraints.

So to put a number to it, by-the-minute rentals like Car2Go or ReachNow charge $0.41 to $0.49 per min. Self-driving cars would likely be equally expensive. That is not cost-competitive with mass transit (public or private) except for some very short trips or when one manages to fill an entire private car with passengers from the same group. For example, a trip from Ballard to Belltown, $2.50 on public transit, would be at least $7 in a private driverless car assuming no traffic. The cost on public transit is even lower for a frequent rider with a monthly pass.

As cities become denser, the demand for people moved per hour per street increases proportionally to the population increase. Street space, however, does not. As established in the supply and demand of street space, while a general purpose lane can move 1,440 people per hour (even accounting for our region’s average occupancy of 1.6 people per car), a bus lane can move more than 4 times as much at 6,000 people per hour! This is a capacity benefit equivalent to building 3 more lanes of road at the cost of not much more than paint. Since other road expansion options are cost-prohibitive at scale (widening requires acquiring expensive urban land and destroying neighborhoods, while elevated and underground/tunneled roads are even more expensive) it is safe to assume that we will see more space dedicated for high-occupancy vehicles.

And while bus lanes certainly enable moving more people on the same stretch of road, on many corridors it may make sense to utilize less constrained HOV lanes with a demand-based minimum number of people per vehicle. This would open the gates for mass transit with smaller vehicles – vans, minibuses or even just full cars–and also both public and private use. It’s likely that a significant portion of future mass transit will look like this. A great preview of such an arrangement are the HOV 3+ lanes on SR-520. They don’t experience congestion and serve not just Sound Transit and Metro, but also the private shuttle buses of major employers like Microsoft, Google, Facebook and also vanpools and a small proportion of cars.

So if HOV lanes are a viable capital investment, what about rail? Given all of the above, isn’t it a waste of taxpayer dollars then? One just has to look at the capacity comparison from the above-mentioned article to get a quick answer. 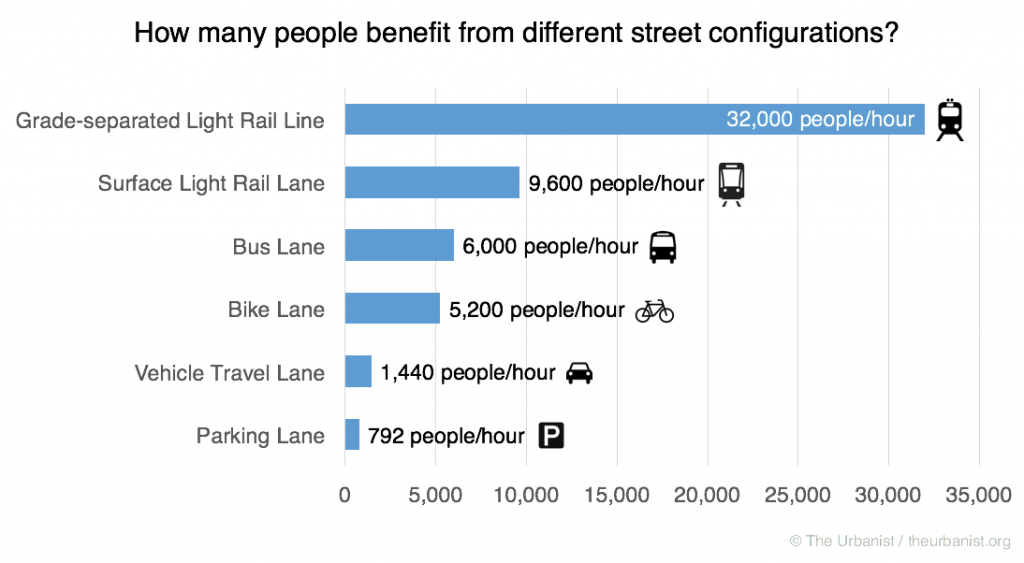 As grade-separated rail with 380-foot trains (e.g. like our current Link Light Rail as shown above) can move more than 5 times more people than a non-congested bus lane or even more than an HOV lane, there really is no match to getting more bang for the buck from the cost of building new right of way.

Some people mention driverless platoons of buses with no following distance making a de facto road train. However, if such a road train were to merge even just in and out of stops, it would require through traffic to make an abrupt stop due to its lengthy merge time. Even though it would be rubber tired, it would operate most safely with the same type of signaling system used for rail transit. And that would mean limiting throughput to around 60 vehicles per hour and would preclude most other uses effectively requiring dedicated right of way. In other words, such a road train would be just as expensive as a conventional rail train. So when it comes to designing the highest-demand corridors, rail is not just the best alternative today, but may remain so for a while in the future.

In conclusion, if mass transit remains cheaper than personal cars, is frequent enough to compete with its level of freedom and travels faster during rush hour, will it still be killed by driverless cars? Not by a longshot. It is more likely to experience a new renaissance with service better than ever before and will help us derive new returns even on pre-existing infrastructure investments, so we should keep funding them.

Featured image: Driverless bus in operation in the Netherlands.