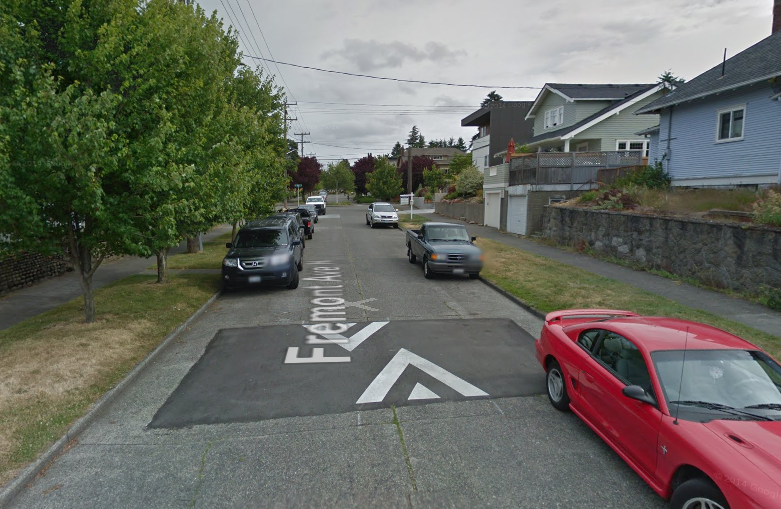 The Seattle Department of Transportation (SDOT) is wrapping up some major Greenway improvements in Northeast Seattle. Stretching from the Burke-Gilman Trail in Bryant to NE 89th St in Wedgwood, the 39th Ave NE Greenway corridor has been getting some serious street calming in the form of new speed humps, stop signs, and sidewalk upgrades. SDOT hopes that these changes will make walking and bicycling safer and more accessible for all ages and abilities.

Following up the initial 39th Ave NE Greenway installation, SDOT made a small four-block Safe Routes to School spur (in the form of speed humps) in 2014 and a larger extension of the official Greenway corridor beginning in 2015. The extension covered 18 blocks snaking north and west of the Greenway’s original NE 80th St terminus and ending approximately at 32nd Ave NE and NE 89th St. Besides paint and route signing, SDOT added new traffic control signs at six intersections to stop vehicles before crossing through the Greenway and concrete work for accessibility.

SDOT recognized that 35th Ave NE presented a major challenge for people on bikes hoping to cross the thoroughfare via NE 89th St. Crews initially installed an in-street bike detection device to aid those on bikes across, but most riders reported that it was not working properly. Agency staff are now in the process of evaluating how to make the bike detection work as intended. One solution–beyond in-street detection–could be installation of push buttons at the edge of the road, which would allow people biking to press as they arrive at the intersection. SDOT staff say that would require development of a new cost estimate and determine the value of the project deliverable in relationship to other Greenway Program priorities. As a stopgap measure, SDOT crews have improved access to the pedestrian push buttons for people biking.

As a neighborhood Greenway, the existing 39th Ave NE corridor sees relatively positive numbers of people riding bikes. SDOT started keeping hourly counts of bicycle traffic in 2014 with a bike counter at NE 62nd St. According to the data, about 251 people riding bikes use the lower portion of the Greenway on a daily basis. That number has been relatively steady since the counts began. Analyzing data for the first six months of each of the past three years, SDOT has logged daily averages of 215 (in 2014), 275 (in 2015), and 251 (in 2016) people riding bikes.

In 2014, SDOT evaluated the corridor to determine the motorized traffic counts and speeds on the roadway. What transportation planners found was a lightly used road (typically between 100 and 300 daily vehicle trips along the route) and average speeds substantially higher than the posted limit of 20 mph (85% of motorists were found driving at or below 25 mph to 27 mph along the route). With fewer than 1,500 average daily vehicle trips and a high rate of speeding, SDOT staff determined that the corridor could benefit from additional street calming treatments appropriate to the Greenway street typology to increase safety and further promote walking and biking.

To combat speeding, SDOT is adding more than 30 speed humps along the corridor, which is nearly one per block. Speed humps will are typically designed to be 12 feet long and three inches high. Unlike many smaller speed bumps, they don’t allow motorists to divert around them or take them at a different angle. Instead, they’re designed to force motorists to slow their speeds to 20 mph or below. The speed humps, however, are carefully constructed to ensure that emergency vehicles (like fire trucks) and buses can still cross them without harming their undercarriages and unduly impeding them.

Work on the new speed humps is already underway. Look for the fruits of the corridor project to fully wrap up this year.