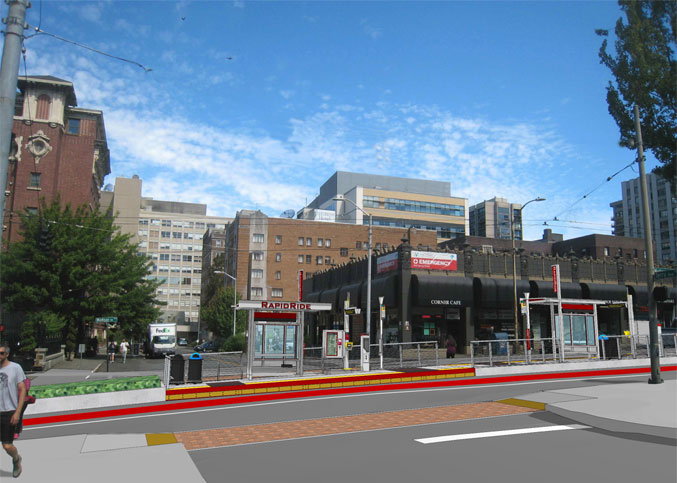 Relative to other medium-sized American cities, Seattle has a good bus network. What it doesn’t have is a true bus rapid transit (BRT) line. The Seattle Department of Transportation (SDOT) wants to change that with “Madison Bus Rapid Transit,” as it has labeled a new project in a corridor designated for RapidRide+ upgrades in the Move Seattle levy. SDOT is still accepting online comments on the 30% design at the project website.

Calling a project “BRT” definitely raises expectations but with lifted expectations comes a duty to meet them with a good design. The early design from November didn’t do much to quell concerns of BRT creep and falling short of expectations. Why? It showed only 36% exclusive laves sandwiched between 40% business access transit (BAT) lanes and 36% mixed lanes. The Institute for Transportation and Development Policy (ITDP) recommends 100% dedicated lanes.

Luckily SDOT said its latest design is improved with 60% exclusive lanes and 4% BAT lanes. It would still technically be a close call meeting the BRT standard (PDF) established by the ITDP on the two key qualifying categories of dedicated right-of-way and busway alignment. Here’s the scorecard on dedicated lanes on which a project must score 4 points for the IDTP to consider it BRT.

Running through the other broad categories—service planning, communications, stations, access and integration—and taking a few guesses, Madison BRT appears set to score about 59 points out of 100 possible just surpassing the threshold (55 points) to earn Bronze-standard BRT from the ITDP. Note, at least 70 points is needed for Silver-standard BRT and 85 points for Gold-standard. My full scoring is listed in detail at the end of this post.

Now unfortunately a score around 59 points would put Madison BRT in danger of losing its bronze medal with even minor performance deductions. Madison BRT would have to average at least 12 miles per hour speed to avoid a “Commercial Speeds” deduction (which ranges up to -10 points for under 8 miles per hour). Beyond that, peak ridership would have to be high enough, enforcement of right-of-way stringent enough, and bus bunching rare enough to avoid deduction, each of which could spell trouble. The performance deductions categories are listed below with their maximum penalty.

The Madison Street project has a path to getting Bronze-standard BRT status, but its a path beset with many potential stumbling blocks. We could reasonably be skeptical and say it’s unlikely to score as BRT, but let’s be optimistic and give SDOT the benefit of the doubt, at least until further designs or performance of the line itself change our view. It shows vision that SDOT went for full BRT, and hopefully they continue attempting to upgrade key corridors to full BRT.

Looking Ahead To Other Projects

The Urbanist has declared we will only call projects BRT that could realistically meet a rigorous standard like the ITDP lays out. Now the ITDP isn’t the be all end all, but a bad score should indicate when a design has strayed too far from best practices. It’s hard to imagine other RapidRide+ projects getting BRT certification largely because often their right-of-way is limited and SDOT is unlikely to have such a large budget since the seven lines will have to share the $169 million allotted in Move Seattle that SDOT hopes to use to leverage a total of $418 million. Subtracting Madison’s $120 million, that’s about $300 million for 6 lines or $50 million per project. Given Madison BRT’s design took $120 million for 2.5 miles, it would stand to reason that the other RapidRide+ corridors, all of which are longer, are going to need more than $50 million each to also achieve the Bronze-standard. Perhaps, SDOT can lavish attention on a few best candidates to get a few lines to Bronze-standard BRT. The 40 and 48 corridors seem like the best bets.

The other RapidRide+ project far along in design process is the Roosevelt/Eastlake project, and the design looks decidedly un-rapid with an estimated 8 mph average transit speed and 80 to 90% mixed with traffic. A slow line inevitably makes the bus rapid transit label hard to swallow. Worse the “BRT” option SDOT presented claimed 21 mph transit speed would somehow be obtained, although average speed that great seems implausible. The option was ruled out due to cost concerns. Unless the Roosevelt design changes dramatically, it’s hard to fathom it earning BRT status from the ITDP or being considered “rapid” in the minds of its riders.

The ITDP established a standard with 30 categories and a maximum of 100 points possible. Above is how Madison BRT fares under its 30% design by my tally anyway.

Note: I awarded Madison BRT an additional 2 points in the Top Ten Corridor category after going back to run the numbers in riders per mile. The 12, though averaging just 3,600 riders, manages a decent score in riders per mile thanks to its short 3 mile length. There is also an argument for adding a portion of the 11 or the 60 to the corridor’s tally since they each use Madison briefly, but I don’t have the station by station data to parse that out. Even without part of the 11 or 60 ridership, Madison Street could secure the ninth slot if measured per mile. Below is how the corridors stacked up by my math. 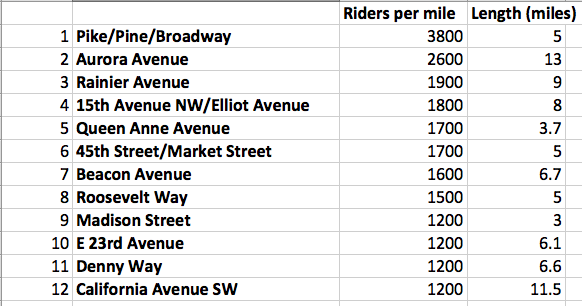