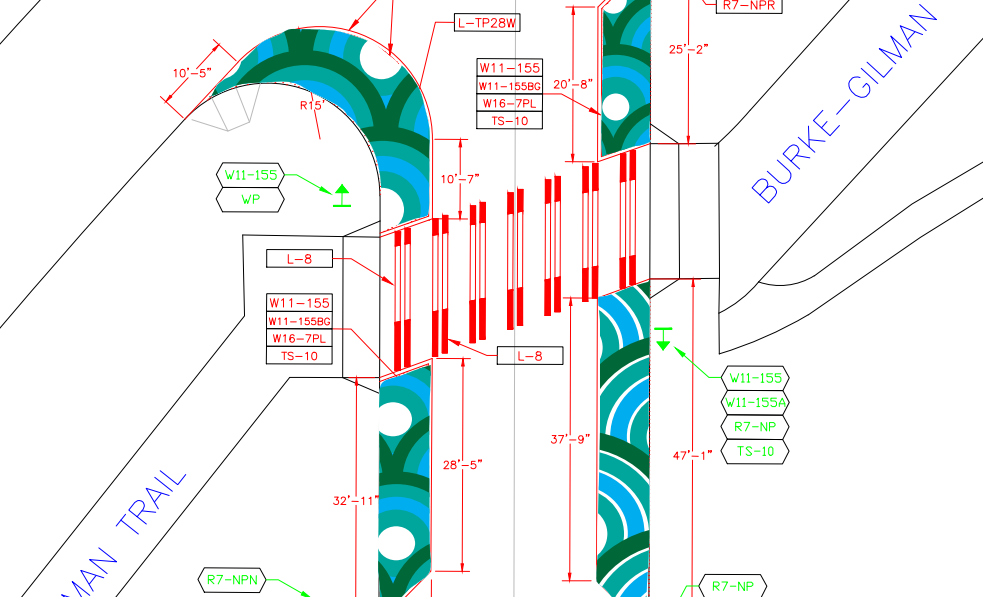 The Bryant neighborhood is getting a lot love as of late from the Seattle Department of Transportation (SDOT). Already in the midst of safety improvements to the 39th Ave NE Greenway from the Burke-Gilman Trail to Wedgwood, more safety improvements are in the works for the trail crossing at 40th Ave NE. SDOT plans to roll out new paint, flexible posts, and signs to slow motorists along 40th Ave NE and make the trail crossing easier for people walking and biking. But in a twist, SDOT’s new paint job will also add a bit of pizzaz to the street.

Wild circles will twirl on the pavement near the trail crossing in greens and blues. The circle patterns aren’t entirely uniform. If you look closely at the schematic above, you’ll notice that there are essentially four distinct patterns–one for each quadrant of the crossing. The inspiration for the design comes from the work that community advocates with Seattle Neighborhood Greenways commissioned as part of last year’s Park(ing) Day Plus demonstration.

SDOT is well known for using colorful preformed thermoplatic materials for pedestrian crossings, bike and bus lanes, and pavement parks. But this is one of the first big attempts to go the extra mile with a highly stylized pattern.

The paint job will essentially extend the curb by seven feet along 40th Ave NE and tighten up the intersection corner at NE 52nd Pl. The width of the right-of-way is not particularly great. From curb to curb, the roadway surface is approximately 36 feet wide while the sidewalks are each five feet wide with five-foot planter strips. Adding the new paint should reduce the roadway width to approximately 22 feet, which is about 11 feet per lane. Tightening up the radius at NE 52nd Pl should also improve the habits of motorists near the intersection.

As it is today, the safety of crossing the trail is tenuous at best. The trail is somewhat unusual in that it comes to 40th Ave NE at a diagonal angle (southwest to northeast), although the crossing itself is generally perpendicular. Motorists don’t expect crossings like this and it’s not readily apparent that it is there upon approach, despite the fact that SDOT has cleared the planter strips of bushes and trees leading up to the crossing. Perhaps contributing to this is the fact that signage notifying motorists of the crossing is minimal and abrupt, being found only just before the crossing itself. So those factors alone may partially explain why so many motorist seem surprised when they see a person approaching or crossing the trail on bike or foot.

But the context of the roadway also plays a major role in the safety issue. Vehicles are prohibited from parking on the street near the trail crossing. Coupled with the lack of street trees and street furniture, this gives the appearance that lanes are wider than they actually are. And, the eight-block stretch from NE 55th St to Sand Point Way NE has no traffic control devices. The result of this is that many motorists treat the corridor as an opportunity to speed making last-second stops difficult. Perhaps fortunately, injuries reported at the crossing have been almost non-existent. Only one collision with a person riding a bike has been reported in the past five years.

SDOT has been making some welcome improvements to the Burke-Gilman Trail over the past few years. Just a mile west, a raised crossing was installed at the 30th Ave NE crossing, and a half-mile west from there, a pair of foot rests were added 25th Ave NE intersection–both in 2015. While SDOT could have pursued alternative designs like rapid flashing beacons, raised crosswalk design, or full curb extensions here, they would have been far more expensive solutions than the modest $25,000 budgeted.

SDOT is still awaiting delivery of the preformed thermoplastic pieces from their vendor and hopes to begin installation later next month. When they do, crews will torch down the materials to make them adhere to the pavement over the course of a few days and then install 16 flexible posts to keep motorists off of the paint. These materials typically last a few years, but SDOT anticipates that the longevity of the materials here should be even greater since they won’t be driven over.