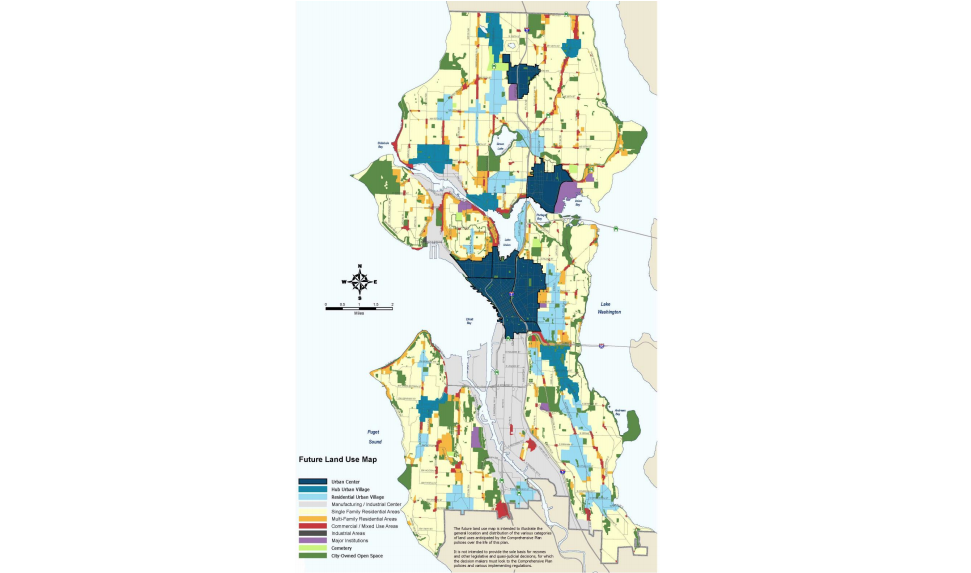 At a formal signing event this afternoon (1.30pm), Mayor Ed Murray will sign Seattle’s new Comprehensive Plan (Seattle 2035) into law. The plan is an important asset to the city, carrying forward community values and objectives that policymakers and technicians alike rely upon to craft and enhance policy. The full document stands at more than 500 pages broken up into 14 Elements (e.g., Community Involvement, Land Use, Cultural and Historic Preservation, and Economic Development), dozens of Neighborhood Plans, and a series of Appendices.

The plan is built upon foundational background data like race, age, housing composition, income, growth trends, and more. In fact, population and employment growth are one of the most important inputs since increases in either category create a new needs like additional transportation, sewer, and development capacity to support them in addition to baseline needs. By 2035, Seattle is expected to grow by at least 120,000 residents, 70,000 housing units, and 115,000 jobs. The adopted plan recommits to the Urban Village Strategy focusing most new growth in urban centers and urban villages:

*Percentage growth above the actual number of housing units or jobs in 2015, except in urban villages where actual zoning capacity constrains percentage growth to less than shown in the table. No job growth rate is assigned to residential villages.
**Very good transit service means either a light rail station or a RapidRide bus service plus at least one other frequent bus route.

We’ve covered the update process nearly from its beginnings and well into the legislative process.

Seattle 2035: Explore the Draft Plan and Weigh In

Stakeholders from the public, hardworking planning and support staff, and City politicians from the Mayor to Council all deserve commendations for a rigorous public involvement process and commitment to building the best possible plan. But like any plan, it won’t be perfect: new issues will arise and invariably annual amendments will be necessary to keep pace with an evolving city. We already know what some of those are, including three Council-approved topics for 2017: updated industrial lands policies; possible Future Land Use Map (FLUM) changes in North Rainier, Eastlake, and Beacon Hill; and cultural and economic vitality policy changes in Chinatown/International District. Further policy changes could also come in the form of urban village expansions on the FLUM and complimentary text amendments to implement the Housing Affordability and Livability Agenda.