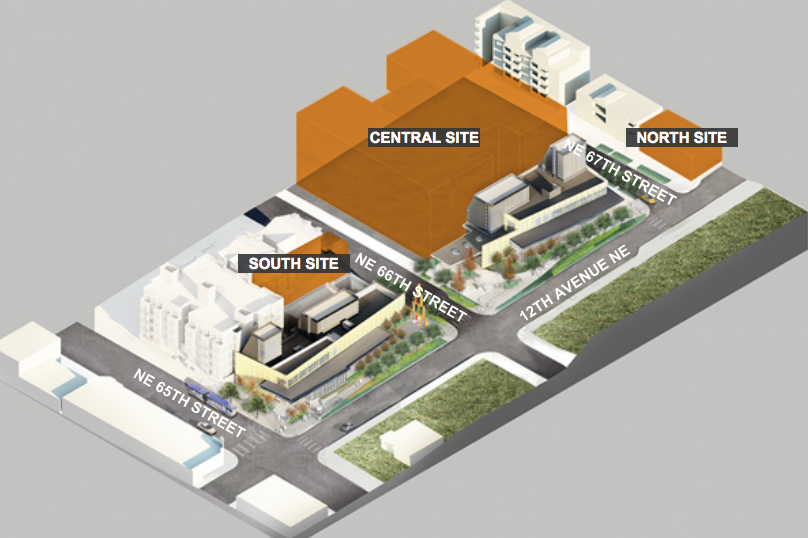 Sound Transit held an open house last night in the Roosevelt neighborhood to discuss priorities for transit-oriented development (TOD). The transit agency has three sites that will eventually become surplus once construction of the light rail station is complete. Following on from an initial meeting on the topic in January, the agency collected feedback from the public on what their TOD priorities are through an online survey and series of stakeholder workshops with the cooperation of the Roosevelt Neighborhood Association, which won a Futurewise Smart Growth award for their work.

The new Roosevelt light rail station is planned to open in 2021. The central site, highlighted in red below, will be available for TOD in early 2020. The other two sites, highlighted in yellow below, will be available a year or so later. Zoning on the sites differ–something we covered before–allowing structures between 65 feet and 85 feet in height. That could bump up slightly in the next year or so as Seattle moves forward with planned rezones. Regardless, a consequential amount housing is possible–likely at least 300 units–and plenty of storefronts so the question is how Sound Transit will program the sites.

At the first open house, community members provided some key directions to agency staff on ground floor uses and public space. These included some of the following:

Sound Transit also received wide-ranging feedback from their online survey, which picked out priorities for affordable housing, ground floor uses, and open space. In the survey, respondents were able to pick multiple priorities. The highest priorities in each category broke out as follows:

From these priorities, Sound Transit has distilled them down into five principles. Two of those principles are highlighted in the following:

Sound Transit now turns to the next phase of the TOD process, which includes development of a Request for Proposals that development and design firms will be able to respond to. The agency will select one of the submitted proposals allowing the winning team to move forward through a more refined process, similar to the one we’ve seen unfold in Capitol Hill over the past few years. The winning team–which may include a consortium of firms or a single bidder–will then need to get land use entitlements to construct TOD on the surplus station sites. Sound Transit’s timeline suggests a robust but quick process with TOD construction beginning as early as 2020.

In the next few months, Sound Transit should complete the Request for Proposals and start accepting proposal submissions. By the end of the year, a winning team will be selected and negotiations on a contract will begin. Once that’s finished, a community design process will start, perhaps in early 2019.