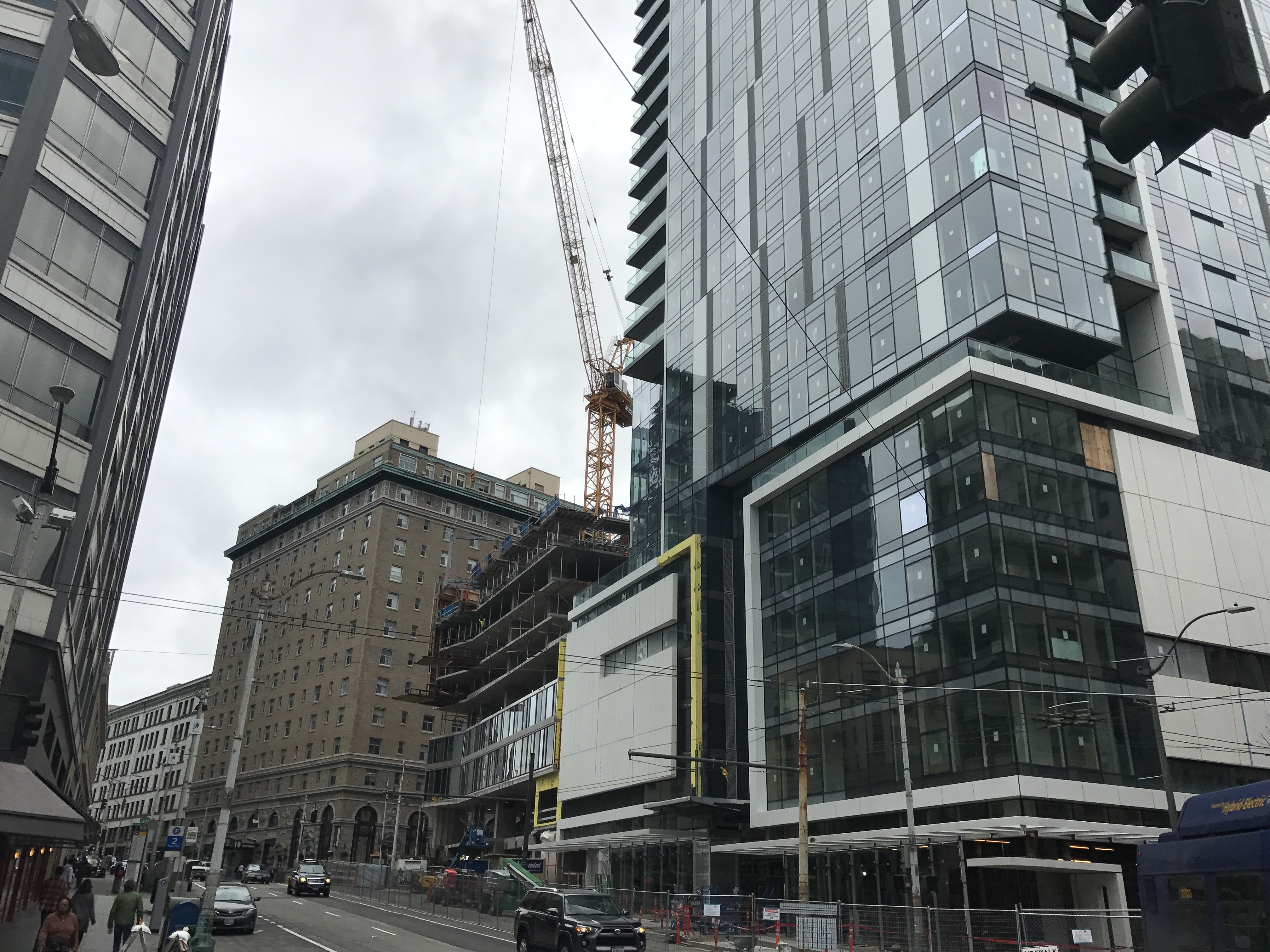 Later this month, the Seattle City Council will take up a vote on the Downtown and South Lake Union rezones, which would help further unlock the Mandatory Housing Affordability (MHA) program and increase development capacity in the city. Councilmembers made some key decisions at the March 21st meeting of the Planning, Land Use, and Zoning Committee adopting a handful of amendments to the proposal and identifying additional amendments that will be brought to the full council on April 10th.

The list of adopted amendments (see PDF below) is relatively short with modified recitals (1b), revised “combined lot” regulations (2b), an option to allow vested projects to opt-in to the MHA program (3b) and reporting (3c), and commit to Council intent language related to livability in Downtown (6b). Amendments that weren’t voted on in Committee included a family-sized unit incentive (4), Transportation Management Program requirements (5), a revised “assumed lots” definition for South Lake Union (7), and performance and payment amounts for all zones related to the MHA-Residential requirements (8). Each of those amendments are expect to return to the full council with final language.

Separately, Councilmember Lisa Herbold raised a technical discussion on the approach to calculating in-lieu fees for affordable housing under the MHA-R program in Downtown and South Lake Union versus elsewhere in the city. According to a brief on how the fee amounts are derived, in areas outside of Downtown and South Lake Union the calculation is conducted as follows:

Outside of the Downtown and South Lake Union Urban Centers, in-lieu payments are proposed to be established based on costs associated with performance. Specifically, payments would be equal to the value of forgone revenue from market rate rent due to an inclusionary requirement (performance) plus a 10% surcharge to compensate the Office of Housing for transaction costs associated with developing units through the City’s Notice of Funding Availability process. Generally, the fee would calculated as follows:

1. Determine characteristics, such as square footage, vacancy rate, and building efficiency for a prototypical residential unit.

5. Reduce the value to a per-gross-square-foot cost based on the assumed average unit size.

6. Multiply the value of the forgone revenue stream by the performance percentage.

Key variables using this methodology are: (1) rents, (2) capitalization rate, (3) vacancy rate, and (4) median income, with the first two variables being the most sensitive.

The operative assumptions are a 5% vacancy rate, 5.25% cap rate, and rents adjusted based on CPI since July 2015, which was when the Grand Bargain was announced. For high cost areas, assumed rents are $3.04/gsf.

Meanwhile, the calculation in Downtown and South Lake Union is very different:

1. Determine characteristics, such as minimum and maximum Floor Area Ratio and site size for prototypical development in a given zone.

3. Divide that by the total residential floor area available through the base zoning, incentive zoning, and MHA-R to determine a payment amount per gross-square-foot.

The Mayor is proposing payment and performance amounts that range from $5.55 – $13.75 and 2.1% – 6%, respectively. The payment amounts are derived using the current incentive zoning fee of $22.65 / square foot, which was increased from $22.35 / square foot in July to reflect an annual inflationary CPI adjustment.

Scenario 1 – Using capitalized revenue methodology proposed for outside of Downtown to establish a payment of $12.80 in the Downtown and South Lake Union Urban Centers based on a 5% performance requirement.

Under either scenario, the brief suggests that formulas would deliver 324 to 444 more dwelling than the proposal transmitted from the Mayor. However, both scenarios would be substantially different than what was originally bargained for by the Housing Affordability and Livability Agenda Advisory Committee in 2015.

During the discussion, Council Central Staff noted that there could be unintended consequences by increasing MHA-R requirements further if additional development capacity wasn’t given in order to incentivize developers to participate in the program. A potential set of amendments related to the MHA-R payment changes could be presented to the full council for consideration.