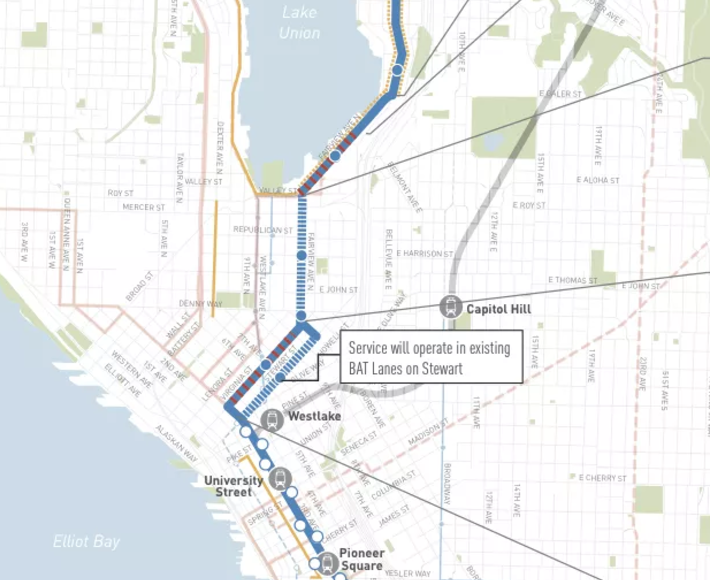 On Tuesday, the Seattle City Council got an update on the proposed Roosevelt RapidRide corridor. Seattle Department of Transportation (SDOT) staff shared details on the Locally Preferred Alternative (LPA) for the line, a required milestone for federal funding, which point to a transit line mimicking the one conceived in earlier drafts. Buses on the Roosevelt RapidRide corridor would provide much more frequent and faster service from Roosevelt to Chinatown-International District than comparable bus service running today. SDOT hopes to launch the line in 2021, to line up pretty closely with the opening of Link Light rail service to Northgate. The plan, however, is a somewhat watered-down version from the one presented last year. Both bike and transit advocates will finds things to like and dislike.

Bike priority in the project seems to have gotten lost in the LPA, which surely comes as no big surprise to the bike community. While bike facilities will indeed be provided north of Valley Street, SDOT is cutting them entirely out in South Lake Union and the Denny Triangle. Dropping planned bike lanes as “out of scope” is not surprising from SDOT, which is consistently overpromising and underdelivering on bike projects.

At Tuesday’s committee meeting, Councilmember Mike O’Brien raised concern over the level of bike lane investments in the LPA. Andrew Glass Hastings, SDOT Transit and Mobility Division Director, brushed this off explaining at length that protected bike lanes in South Lake Union and the Denny Triangle were never really envisioned for the project since other parallel bike projects are in development those areas–such as 9th Ave N. Glass Hastings also said that in other RapidRide projects like the Madison corridor many folks complained bike lanes were getting ignored. In the case of the Roosevelt corridor, he said that transit advocates were unhappy about a perceived lack of bus priority.

Earlier plans had shown a bi-directional cycletrack on Stewart Street, SDOT has sheepishly identified that as “shared bus/bike lanes,” an ill-conceived concept little more than a motorized lane. The same type of facility is identified for Fairview Ave N, but it’s hard to envision a business access and transit (BAT) lane as an All Ages and Ability bike amenity; many folks will bike elsewhere.

Nonetheless, bike lanes are proposed for portions of Fairview Ave N north Valley Street and on Eastlake Ave E and 11th Ave NE. The Fairview segment would be a cycletrack on the west side of the street that eventually moves away from the roadway to link up with lakeside trail. The cycletrack would be a full 12 feet–not bad by SDOT standards. Between Yale Ave N and the University Bridge, bike lanes on Eastlake Ave E would be on each side of the street with physical separation from traffic lanes. North of NE 40th St, SDOT would also install a northbound protected bike lane on 11th Ave NE as far as Roosevelt Station. Protected bike lanes have already been installed on Roosevelt Way NE, so the 11th Ave NE protected bike lanes would complete the corridor bike couplet.

Going To BAT For Bus Lanes

Perhaps the biggest elephant in the room is the absence of the Roosevelt-to-Northgate segment in LPA, which is simply noted as a potential future extension in the plan. SDOT is proposing a mix of bus-only and BAT lanes on the corridor south of Yale Ave N. North of that point, buses would operate in standard traffic lanes. So most of the time savings along the corridor from there would have to come from in-lane bus stops and bus islands to reduce dwell times, off-board payment, queue jumps, and transit signal priority. In terms of physical bus priority through lanes, SDOT is proposing BAT and bus-only lanes in various sections:

Through Downtown, buses would operate on Third Avenue which has partial bus priority and bus-only lanes during certain times. SDOT also plans to provide high quality bus shelters, accessible curb ramps, and other streetscape improvements on the corridor that would make the rider experience better.

These plans–minus the bike situation–are fairly similar to the ones from last year, though it appears that transit on Fairview Ave N north of Valley Street has improved.

SDOT suggests that the LPA would deliver a 20% decrease in travel times along the corridor north of Third Avenue and boost ridership by up to 50%. Frequencies would be higher, too. During the 6am to 7pm timeframe on weekdays, buses would come every 10 minutes. Outside of that, they drop off to every 15 to 30 minutes during early morning and evening hours, and on weekends. Overnight, frequency would become hourly between 1am and 5am. This level of service is similar to RapidRide C, D, and E lines already operating in Seattle.

SDOT needs the buy-off of the City Council on the LPA in order to compete for federal grants–the project is heavily dependent on them for funding. Of a project budget of $70 million, a full $35 million is estimated to come from the Federal Transit Administration under the Small Starts Grant program. SDOT acknowledged that there is a very real question mark on whether future federal budgets will fully fund the Small Starts Grant program. If funding is cut from the program, SDOT will work with King County Metro to slim down the plan further to bring the corridor budget within the scope of available funding while best meeting overall goals for faster and more frequent bus service. Other options may include reprioritizing implementation of planned RapidRide corridors based on the need for federal funding.

Before concluding Tuesday’s meeting, Councilmember Rob Johnson sponsored an amendment that requires SDOT to transmit a report to the City Council by December 15th on options to expand the Roosevelt RapidRide corridor to Northgate. The report will need to explore corridor design and funding options to achieve this, but does not alter the LPA in order to allow SDOT to move ahead in the interim. Councilmember Johnson explained that constituents in his area often lament the loss of Route 66, a former Downtown-to-Northgate bus line via Eastlake and University District. Councilmember Johnson’s amendment is a clear move to restore a portion of the corridor that SDOT has consistently tried to shy away from during project development. Roosevelt RapidRide is another example of a major capital investment for transit in a corridor that currently does not have contiguous bus service.