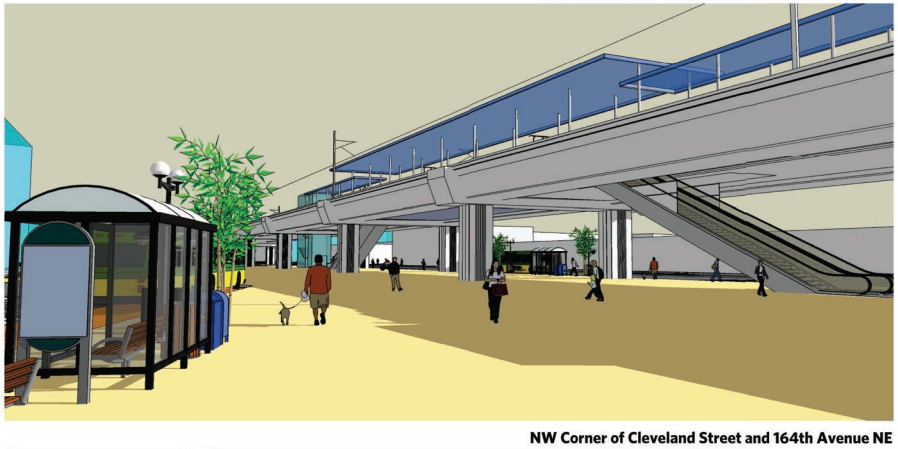 Light rail is headed to Downtown Redmond by 2024. Deciding how it gets there will shape the city for decades to come. Earlier this year, the City of Redmond reached out to communities to share four concepts (see full study) of how to get light rail to the city center. Since then, the City of Redmond has selected its preferred concept, which would involve an elevated station in Downtown Redmond and an at-grade station in Southeast Redmond. In late June, the Sound Transit Board of Directors affirmed the recommended alignment and conceptual design for further study prior to final decision on construction.

The 3.7-mile Downtown Redmond extension is intended to link up with a station at NE 40th St near the Microsoft campus. The total project cost is estimated to be between $949 million and $1.016 billion. The extension is expected to generate up to 9,000 daily riders.

The City of Redmond endorsed a mixed elevated and at-grade concept (Concept 3) for light rail through Downtown Redmond and Southeast Redmond. The Downtown Redmond station would be elevated between the blocks of 164th Ave NE and 166th Ave NE. Guideway for the tracks and station would run essentially parallel to Cleveland St and NE 76th St southeast toward the SR-520 interchange in a former railway right-of-way currently dedicated to the Redmond Central Connector trail. Closer to the SR-520 interchange, the light rail line would be at-grade though separated from other traffic.

The station block would essentially absorb the Redmond Central Connector trail into a large plaza space beneath the guideway and station, propelling the trail on its way to a future connection with the East Lake Sammamish Trail south of the SR-520 interchange with Redmond Way. Most of the station block would be flanked with new bus pick-up and drop-off areas to be added on NE 76th St, 164th Ave NE, and Cleveland St. The bus zones would facilitate easy transfers between trains and buses. The concepts also include other site features, such as landscaping, maintenance facility, substation for overhead traction power, and bus layover spaces.

Three other competing Downtown Redmond concepts had been in the running, including fully at-grade options. The selection of an elevated station and guideway, however, differs from the original Sound Transit 3 plans that envisioned an at-grade corridor in Downtown Redmond and an elevated portion in Southeast Redmond.

Another station is planned for Southeast Redmond at approximately NE 70th St, south of the SR-520 interchange and east of Marymoor Park. The station will serve what Redmond hopes will become a burgeoning urban district. The station will also be paired with some 1,400 new parking stalls for commuters, though Redmond would prefer those be in multiple parking structures wrapped with “pedestrian-supportive land uses.” Redmond has recommended that the station be constructed at-grade, which again differs from the Sound Transit 3 plans. This swap, if you will, was intentional on the part of Redmond.

In a letter to the Sound Transit Board of Directors, the Redmond City Council explained how the City arrived at the swap. Factors in evaluating competing at-grade and elevated alternatives, the letter says, included things like “bus-rail integration potential, land use and transit-oriented development opportunities, traffic and environmental impacts, the ability to connect King County’s East Lake Sammamish Trail to the Redmond Central Connector, and overall cost compared to the ST3 project budget.”

The letter also acknowledged two primary considerations in deciding upon an elevated station in Downtown Redmond and an at-grade alignment through the SR-520 interchange and Southeast Redmond station. Firstly, Redmond officials recognized that Sound Transit’s cost estimates for the overall Redmond extension had budgeted for only one elevated station along the extension. Secondly, an at-grade alignment at the SR-520 interchange would, in the words of the letter, “[make] it possible for the trail connection to leverage interchange modifications that would be required for the light rail project, keeping the trail project affordable.”

Cost-wise, the swap is a much more financially positive move. While elevating the line in Downtown Redmond would add $45 million to the project cost, going at-grade in Southeast Redmond would reduce project costs by up to $136 million. On balance, that means Sound Transit would save up to $91 million for other purposes. The connection of the Redmond Central Connector and East Lake Sammamish Trail also factored heavily in the recommendation since an at-grade alignment would kill two birds with one stone. Constructing the light rail line under the SR-520 is clearly a less expensive proposition than going over it, and it has the benefit allowing both the light rail and trail projects to be accomplished together. It’s expected that Sound Transit will make the at-grade rail line and trail fully grade separated from the on- and off-ramps to SR-520.

Redmond has long been set up for transit-oriented development in its city center. Large-scale projects have been sprouting up in earnest over the past decade, particularly along Cleveland St and near city hall and the transit center. That is, in part, because of the critical mass of businesses and access to quality transit in those areas. But downtown zoning also plays a significant role generally allowing dense, mixed-use development in nearly a dozen different districts. The Town Square zone offers the densest zoning with structures on some blocks allowed to rise eight stories. Most of the other zones cap out closer to five stories. So far, no building has stretched past six stories, but there are ample examples of new five-over-one construction.

In June, Redmond upped the ante with zoning changes near the future Southeast Redmond station. Known as the Marymoor Design District (MDD), the city’s zoning calls for a new dense, mixed-use district. The area is predominately a mix of warehousing, manufacturing, religious, and office park uses.

The MDD zoning comes with a planned street grid to create small, walkable blocks. Zoning allows for a range of maximum building heights from three to six stories. The maximum square footage of buildings (floor area ratio or FAR) is limited by a multiplier ranging from 0.5 to 3.0 based upon the square footage of a development site. In both cases, to get the most building square footage and building height, developers need to use incentives such as setting aside affordable housing units. Other prescriptive development regulations, such as building placement, upper-level stepbacks, amenity space requirements, and types of permitted ground floor uses, are designed to guide the look and feel of the district.

The MDD4 zone differs from the rest of the district zones since it is still geared toward non-residential uses, particularly manufacturing. The zone though does allow for a variety of commercial, institutional, and public uses. The rest of the MDD zones are focused on mixing commercial and residential uses. Just northeast of the Marymoor Design District between the East Lake Sammamish Trail and Redmond Way is a long sliver of General Commercial zoning. That zoning, too, allows for mixed uses–including residential–and arguably could serve as a continuation of Marymoor Design District; building heights cap out at four stories and a modest 1.6 FAR.