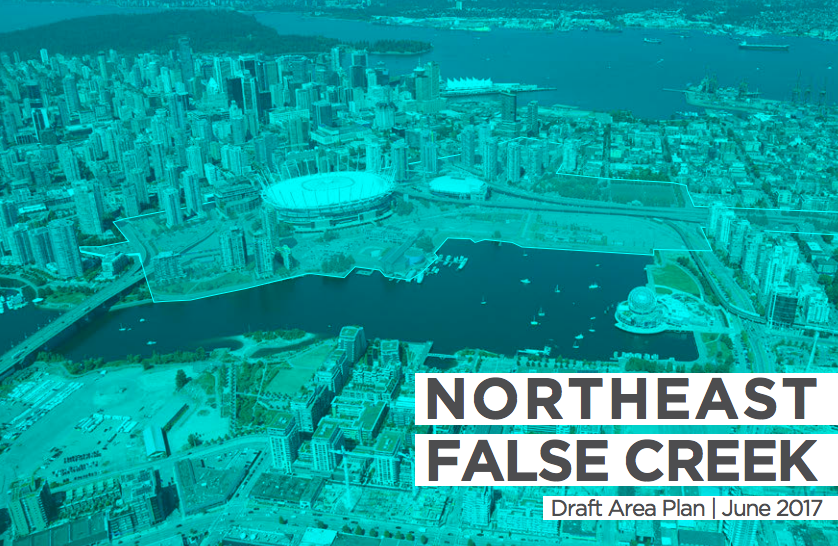 In Vancouver, waterfront viaducts are coming down and parking lots will be transformed. City officials hope to lay out a new district in their place. For the past two years, the British Columbian city has been developing a comprehensive program that would build a new network of open spaces, streets, and dense mixed-use precincts on the edge of False Creek, an inlet separating Downtown Vancouver from the rest of the city. A draft plan for the Northeast False Creek area was released in June detailing the actions and objectives to realize the renewed district.

During the era of great highway building in the 20th century, the twin Georgia and Dunsmuir Viaducts were constructed and opened to traffic in 1972. A regional plan had intended to demolish neighborhoods throughout Vancouver to carry vehicles from the central core of the city. Local communities, however, raised their opposition to the inevitable displacement and destruction of districts, ultimately defeating the effort. Though limited, the quarter-mile long viaducts did leave an indelible mark on the Chinatown and Black Canadian (Hogan’s Alley) neighborhoods–the latter of which was entirely displaced by the highway building.

Breathing Life In Through Open Space

Removal of the viaducts will lay the ground work to build a large open space (Creekside Park) between False Creek and Chinatown bounded by Quebec Street on the east and Carrall Street on the west. Recent plans, which were developed in partnership with a consortium of architecture firms (including James Corner Field Operations which is assisting in design of Waterfront Seattle), provide a high level of detail on programming and design for a waterfront park, boardwalk, and trail system. Creekside Park will integrate with Andy Livingstone Park to the north, which contains a mix of passive and active recreation spaces. The open space is intended to add more than 13 acres of parkland to the district.

Creekside Park will add a striking elevated boardwalk along the edges of False Creek. Beachy features, gardens, meadows, venues, plazas, and even a skate park are also planned to create a diverse open space network. To connect the Creekside Park with Andy Livingstone Park, the plan conceptually proposes a new landbridge over the SkyTrain viaduct and Pacific Boulevard to secure views and offer a seamless experience between the spaces, though an at-grade crossing would also be available.

Another goal of the open space is to create a continuous promenade from the False Creek waterfront to the Burrard Inlet waterfront to north, which would follow along Carrall Street. On the north side of the waterfront railway tracks, there is already a large park on Burrard Inlet called CRAB Park at Portside.

Two main east-west streets currently run through the district at-grade. One of the two is Expo Boulevard, a one-way street which loops to the north of the viaducts connecting directly with Quebec Street, intersecting north-south streets, and diving under BC Place (an arena). The other is Pacific Boulevard, which also a one-way street that loops south of the viaducts and connects to the most of the same streets. Together these street form a complete east-west street network for surface travel.

However, Vancouver is planning to thoroughly remake the street network by merging the two streets into one. The network would be simplified by threading Pacific Boulevard and Expo Boulevard together north of the SkyTrain viaduct–the only viaduct proposed to remain. Realignment of the street would also improve street network from Quebec Street to Gore Avenue. Portions of Carrall Street may be removed and modified to improve the central park environment. On the west end, Georgia Street and Dunsmuir Street would be realigned to connect with Pacific Boulevard at-grade.

Vancouver’s plan places priority on mobility for bicycling, walking, and transit. Early in the process, the the city looked at “great streets” globally and locally for precedent in creating streets that would fit the bill of the new urban district. Many of the local streets have painted bike lanes, including Pacific Boulevard and Expo Boulevard. The new street network would upgrade Pacific Boulevard to include protected bike lanes and add a path for bikes through Creekside Park that is completely separate from the boardwalk. Wider sidewalks that are tree-lined would be provided throughout the district to make it more comfortable for pedestrians. The new two-way street network on Pacific Boulevard would also make it easier to provide direct bus service and facilitate a possible streetcar line.

The city estimates that the total cost to remove the viaducts and replace them with a new street network will top $200 million. Funding for this will come from a combination of sources. Fees and improvements made by new development will help cover a hefty portion of the costs. Proceeds from property sale and lease of local properties by the City of Vancouver will also contribute to the project costs. These funds will also pay for other projects in the area, such as utility upgrades and improving Andy Livingstone Park.

Planning for a Compact, Dense District

The draft area plan goes further by considering new development opportunities and policies for six different precincts. Rezones are required for each of the six precincts that would implement the policies in the draft area plan, which would replace existing by-law regulations on development in the area. The precincts are intended to differ in how they function with varying scales and mixes of uses to realize the overall local objectives for the urban district. Development will range from low-rise single uses to high-rise mixed uses, which is common across central Vancouver.

The six precincts identified for development lay out specific actions and objectives for local urban design. For instance, Subarea 6C calls for a maximum floor area of 2,100,000 square feet of residential and non-residential uses, a minimum of 220,000 square feet of non-residential spaces for employment, and a requirement for landowners to propose a subarea masterplan that meets all of the urban design principles and objectives for the area.

Another precinct, Subarea 6D, would infill a portion of highway when the viaducts are removed from the area between Gore Avenue and Quebec Street. Priorities for urban design in the subarea include some of the following in the western half of the precinct:

– Draw upon the typologies of the surrounding context to create an urban block and built form that is a meeting point of the narrow 25 ft. vertically proportioned forms of Chinatown, the tower forms of Citygate and International Village and the mid-rise forms of Southeast False Creek. Locate the highest building form as part of the family of towers in Citygate at the central south side of the west block.

– Buildings should be a range and variety of heights up to the view corridors (approximately 20 storeys).

– Transition in building height from Citygate north and east to Chinatown and Strathcona.

Eight streets are planned for commercial and retail frontage, including key portions of Pacific Boulevard, Pat Quinn Way, Quebec Street, and Expo Boulevard. These streets today generally lack any commercial or retail activity, though much of that is the result of impediments like the viaducts.

Vancouver’s Northeast False Creek plan serves to show how creative planning can unlock an underutilized area and worn out infrastructure for a robust, diverse urban district. Pairing open space, dense land use, and mobility plans together can deliver valuable public benefits to local residents and businesses new and old alike.