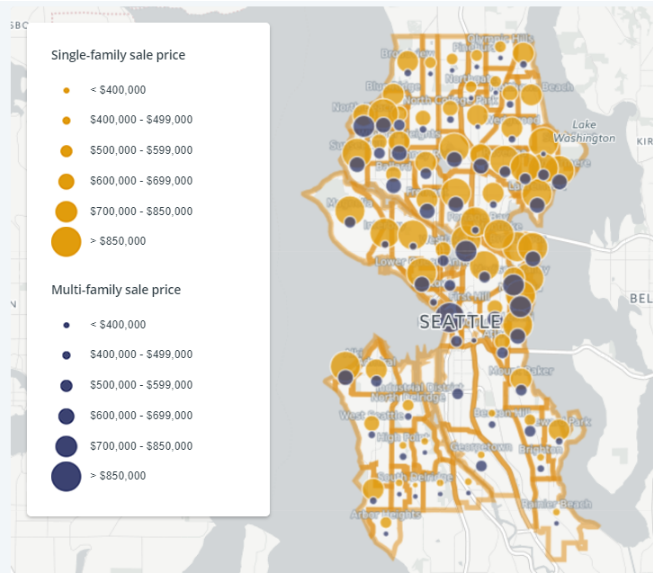 Below is Sightline’s interactive map. The map tallies home sales by neighborhood between July 1, 2016 and July 1, 2017, which totaled almost 11,000. Almost 7,000 were single-family home sales–defined strictly to the detached single family home variety. “The other nearly 4,000 sales were multi-family homes, represented by blue dots,” Morales wrote. “This group includes condominiums, townhomes, rowhouses, and homes on residential small lots (RSL), like skinnies and four-packs, sometimes known as cottage housing.” For the land-use nerds out there, technically townhomes, rowhouses and duplexes are attached single family homes, but for the purposes of this study it makes sense to lump them together broadly as multi-family, since they do represent a step up in density.

I’ve proposed solutions to counteract Seattle’s million-dollar-mansion tendency. One idea is to ban the construction of new mansions by capping square footage like Portland did. Another idea–which is singled out as an high impact recommendation in the Housing Affordability an Livability Agenda (HALA) committee report–is to greatly expand the amount of land zoned for multi-family housing. More than half of Seattle’s parcel land is zoned for only detached single family homes, a very expensive urban housing type. The Seattle Department of Planning and Development estimated single family zones comprise nearly 65% or parcel land area–it depends how you measure but it’s clearly high. Contrarily, the HALA report pointed out “only about 10% of the parcel land area is zoned for Lowrise (LR), Midrise (MR) or Highrise (HR) multifamily housing.”  Another high impact recommendation is to reform design review to make it easier and faster to get multi-family projects including missing middle housing approved. The margins aren’t as big on missing middle projects so it’s crucial they avoid costly delays.

Play around with the map yourself to see the differences in your neighborhood. Zooming into the interactive map offers finer grain detail with home sales by location.