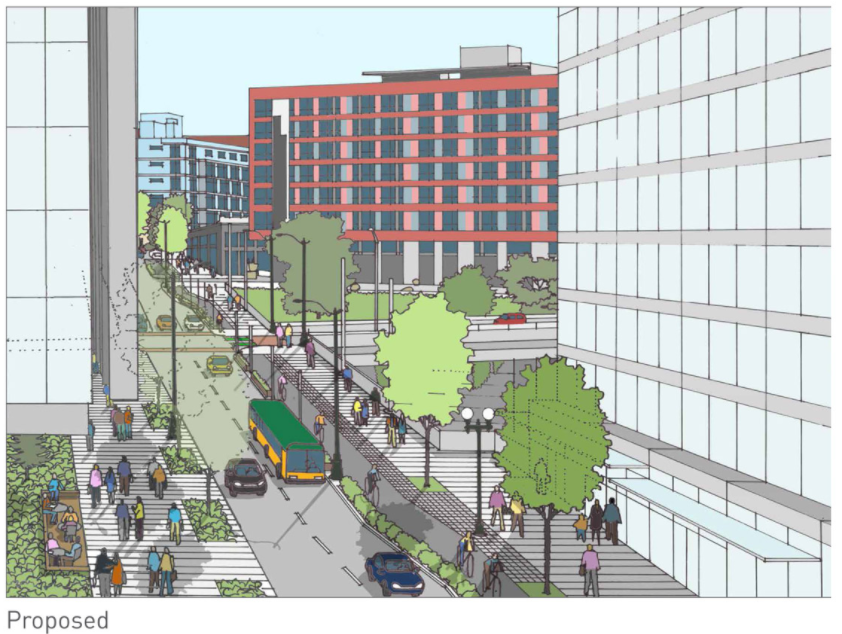 On Tuesday night, Seattle’s Office of the Waterfront and the Downtown Seattle Association (DSA) presented their concepts for what is being called Pike Pine Renaissance: Act 1. This is an intensive reinvestment in the downtown retail district of Pike and Pine Streets between First Avenue at Pike Place Market and Melrose Avenue at the Melrose Market. The two agencies had held their first open house back in January to assemble ideas which have now been actualized into 10% design concepts for all of the streets involved.

The plan would use $20 million from the local improvement district (LID) on the waterfront retail district to pay for the proposed improvements in Pike Pine. This lid is still in the process of being formed, is planned to fund a wide variety of projects including the Waterfront park and promenade, an extension of Bell Street park, and improvements to streets in Pioneer Square. Construction is currently planned to take place in 2020 or 2021.

One of the main goals of the project is to provide continuity in the streetscape from end to end: with consistent street paving, unique crosswalks, increased tree canopy and added lighting. Every crosswalk from Second Avenue to Boren Avenue is proposed to be replaced with a paved crosswalk comprised of 2×2 stone pavers, with the exception of Westlake Plaza where a similar street treatment already exists but the crossing zones are not currently distinguished.

The basic street configuration has already been implemented downtown as of last weekend, when a full lane on the left side of both Pike and Pine Streets in the direction of traffic was converted to a bike lane. While those lanes haven’t been extended to all streets downtown, Pike Pine Renaissance assumes they will be, with high-quality planters and landscaping providing a buffer between the bike lane, sidewalk, and street.

The concept even assumes that Pike and Pine will be converted to one-way streets all the way to up Melrose Avenue. Currently Pine Street becomes two way east of Eighth Avenue and Pike Street east of I-5. This idea was also presented as part of One Center City near-term recommendations, with the main impetus behind the change on Capitol Hill being it enabled the retention of more parking spaces than the other options. This feels like it is opening the door to reexamining one-way streets all the way to Broadway, even though those streets are outside this project’s scope. As I have said before, conversion of Pike and Pine Streets on Capitol Hill would require an enormous amount of traffic calming measures to improve safety on what are already very dangerous streets.

Conversion to one-way would also prohibit buses from heading eastbound on Pine Street after cutting over from Pike Street via Eighth Avenue. This enables buses to avoid a time consuming turn up at Bellevue Avenue, though that could be redeeemed with intersection improvements there. But it begs the question: could, instead, Pine Street become a two-way street where buses to and from Capitol Hill are prioritized? Having bus operations on only one street is less confusing for riders.

The stretch of Pike and Pine between Ninth Ave and Melrose Avenues, as you can see in the image above, are envisioned to get enlarged sidewalks with right-of-way taken from the street. Currently the sidewalks are very narrow, and it’s hard to believe but Pine Street has only had a sidewalk on both sides of the street since 2009.

Another exception to the general street plans here are the blocks of Pine and Pike between First and Second Avenues. The designs here are envisioned as a curbless “shared’ street of the kind that Seattle hasn’t really been able to pull off anywhere.

Another place these plans are zeroing in on for improvements is at Pine Street outside Westlake Station on the south side of the street. SDOT recently removed the back angle parking from this spot and it currently sits empty without a purpose. The plans here call for an activated plaza space with food vendors and games. Activation is one of the benefits that the Downtown Seattle Association brings to the table in this partnership with the city. The DSA is currently engaging in activation at two downtown parks: Westlake and Occidental. The flip side of this control over these spaces, which has certainly led to more vibrant and used parks, is that the DSA has control over allowing commercial uses of these spaces. In the past year, they have allowed Mazda to test drive cars in Occidental Park and Capital One to market financial services in Westlake Park. (The Parks Department also has the ability to allow commercial uses in its parks, and as we have seen in Westlake Park in recent months, these are far from the only events being held in parks under the DSA’s control.)

Westlake Station is Seattle’s busiest transit station and even with buses exiting the tunnel that will not be likely to change anytime soon. The Third Avenue entrances to Westlake are almost downright shameful and a plaza is a great idea to improve access and implement placemaking. But don’t forget the bike parking.

There is a lot to like in this plan. The Office of the Waterfront is working with the Downtown Seattle Association to propose a streetscape concept plan that could turn Pike and Pine into one of the great pedestrian corridors in the United States. In the next few years as the design progresses, it will be important to ensure that the specific details are hashed out in a way that ensures that this vision is truly carried out. Pike Pine Renaissance is a large part of the long-range public realm improvements that are a part of the One Center City process, which is taking a long-term view at re-envisioning our public spaces downtown. This is a unique opportunity to be part of the process.

You can click the image below to see a full proposed layout plan for the entire stretch of Pike and Pine Streets, with images illustrating the street concepts that are envisioned for each section.

Waterfront Seattle has an online open house on these concepts where you can provide feedback from now until October 24.