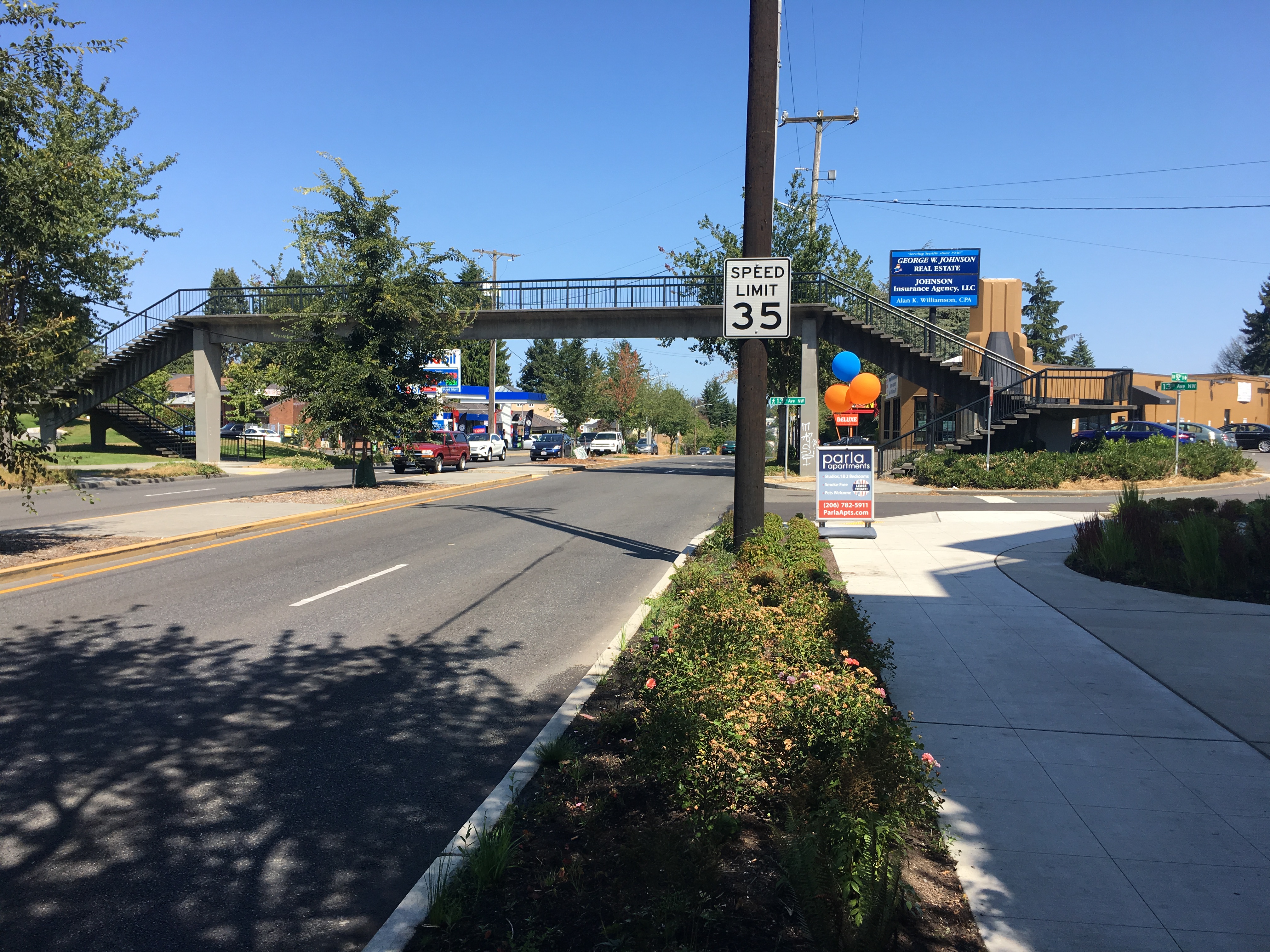 A pedestrian overpass crossing a busy stretch of road in Crown Hill will stay. Local residents and advocates had pushed for the pedestrian overpass at Holman Rd NW and 13th Ave NW to be kept while making other bike and pedestrian safety improvements. In an announcement last week, the Seattle Department of Transportation (SDOT) explained that staff had explored both overpass retention and removal to determine how the a new pedestrian signal and revised intersection would operate with an at-grade crossing. Initially, SDOT proposed elimination of the overpass and installation of two at-grade crosswalks, but later reexamined the issue.

Selena Carsiotis, a member of the Crown Hill Neighborhood Association and former co-chair of Ballard Greenways, played an instrumental role in the road safety project and effort to keep the pedestrian overpass. She twice sumbitted proposals to improve the intersection for people walking and biking. Carsiotis praised the updated design. “It is the best possible outcome to know that the community initiated safety project is not going to cost the community an iconic piece of functional infrastructure,” she said. “The overpass has come to represent Crown Hill’s gateway, but Holman Road the dividing line. With the addition of a signal at 13th Ave NW people will be able to cross Holman Road safely at-grade, and still enjoy the view from the overpass.” Carsiotis hopes that the pedestrian overpass will be renamed in honor of Helen Merril​ Neil, an earlier safe streets advocate who successfully convinced the City to construct the overpass for nearby students.

There was, however, a variety of considerations that led SDOT to initially propose removal of the pedestrian overpass, such as construction of two parallel at-grade crosswalks with signals and lack of accessibility compliance of the existing overpass. The revised proposal only accommodates one at-grade pedestrian crossing due to signal and site distance issues that the pedestrian overpass creates. The proposed design also creates additional complexity for the signal design and construction work of soils and foundations, SDOT says. These issues factored into the initial overpass-free design.

Last year, Crown Hill community members and local safe streets advocates–including Carsiotis–submitted a proposal last year for special grant money under Neighborhood Street Fund (NSF) to redesign the intersection. The proposal was selected late last year among dozens of other projects seeking funding and implementation through the NSF process. Over a quarter-million dollars is pledged to the project, which will make crossing Holman Rd on foot or bike much easier. Right now, local residents and students can not cross the street without making a hike up and over the overpass or walking. This is challenging for many people, especially those with mobility challenges and riding bikes, and likely deters many from making foot trips in the area. The at-grade crossing will change that giving another option to move north and south. Keeping the bridge could also be useful for those who don’t want to wait for a stoplight.

Five key improvements will be made to the intersection, including:

The project timeline is expected to stay on course with design completion by the end of this year and construction in 2018. Meanwhile in Beacon Hill, the future of another big NSF project that we covered earlier this year is still up in the air.

Holman Road Trades an Overpass for a Safe Crossing