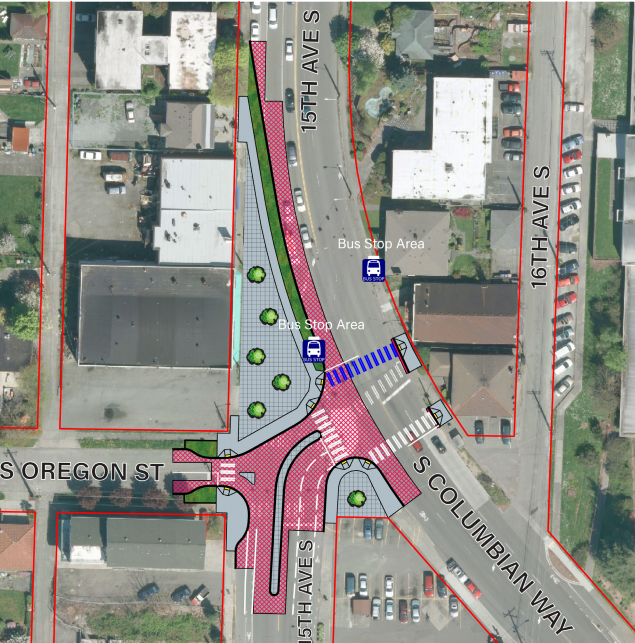 This year, with Seattle’s new transportation levy providing most of the funding for the projects, the final selection of which projects to receive the grants was moved from the neighborhood councils to the Levy to Move Seattle Oversight Committee. On Thursday evening that board selected, out of the 65 projects that made it through the NDC selection process, the ones that will be selected for the program, for design next year and construction in 2018.

In all, 12 projects got the green light to move forward, all adding up to a total project cost of $6.5 million dollars. Costs to conceptualize all 65 projects have already come in at around $700K, with an additional $800K to be allocated for planning costs for the next round of NSF grants in 2018, bringing the total cost for the NSF program to $8 million.

Here are the projects:

This $300K project at the gateway between West Seattle and Downtown is perhaps most notable for a feature that would be pretty unique in Seattle: a dedicated bike signal that would function on a diagonal across Harbor Ave and Spokane St. Other improvements would attempt to improve visibility and sight lines and extend curbs to square them off. This is one of the most heavily trafficked areas for biking to and from West Seattle. Some “bike ramps” would connect at Avalon but a protected bike lane would require the removal of parking so that will likely go through further community process. 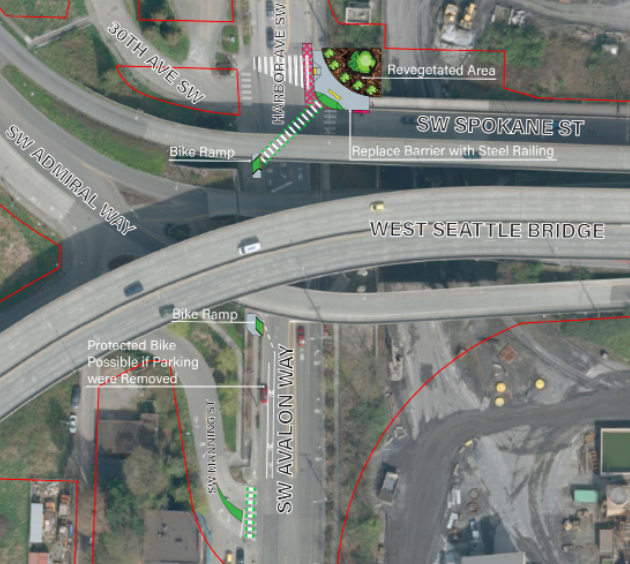 This project would leverage Safe Routes to School funds ($100K), Greenways funds ($100K) and almost $1.1 million of the NSF money to improve crossings at a set of intersections along Aurora Ave N. 92nd Street is the main intersection slated for improvements, which will have to be approved by the Washington State Department of Transportation. Other streets that will get restriped crosswalks will be 85th, 90th, 95th, 100th, 105th, and the overpass at 102nd will be improved- all of these streets will also be getting an “art feature” to be determined by the community.

This $1.2 million project would add curb bulbs to intersections along the John & Thomas corridor in Capitol Hill between Broadway and 23rd Ave. Bus bulbs constructed at  bus stops should speed up routes 8, 10, and 43 in the corridor by allowing the bus to stop in traffic.

This will reduce travel lanes on the freeway overpass on 70th Street from 15 to 11 feet, making room for a protected bike lane in each direction. It would add curb extensions to either end of the bridge and square off intersections. Project cost would be $471K.

This redesign of a very messy intersection in Beacon Hill would make it much more predictable for all users. This nearly $2.4 million dollar project would be only half funded by NSF funds, and the rest would come from the SDOT general fund budget. A public plaza would come out of the street redesign.

This $280K project in the Central District would install a rapid-flashing beacon to help students cross midblock between Washington Elementary and the park across the street, install curb bulbs at Jackson and 26th, and repaint Jackson and MLK to add a turn lane, clarifying the existing lanes.

This project would mainly serve to create paths for students at Chief Sealth school to get to and from SW Trenton Street, where currently they use paths through vegetation. It would also add a curb bulb on Trenton. Total cost for this project is $465K.

This $500K project would improve the lighting and wayfinding on entrances to Freeway Park around First Hill. Many entrances are currently hidden and hard to find. Ostensibly this should be good for park safety as well.

This project would leverage greenways funds to pay for improvements in north Ballard on Holman Road and on 6th Ave NW. The improvements to Holman Road would be located around the pedestrian overpass (at 13th, but everyone will usually say at Dick’s), which has no crossings for those who choose to not use the overpass. Users with bikes are particularly less apt to use the overpass.

The greenway improvements would stretch all the way from 45th Street to 85th street on 65th Ave NW and would include beefy protections for users at major crossings. $1 million in NSF funds are going toward the greenway and another $753K will go toward the crossing at Holman Road.

The NSF proposal identified 14 different areas for improvement at this school that is located at the confluence of three really busy streets, between Yesler, Boren and 12th Ave. However, most of these were determined to be likely to completed by other projects, like Safe Routes to Schools and improvements to the First Hill Streetcar’s vicinity. So this $30K project would only do a few things at Bailey Gatzert: Install a curb bulb at Washington Street near the streetcar stop, and install a new sign for the school, so that drivers have a better visual cue that they are close to a neighborhood school.

This would fund improvements around Hawthorne School in the Rainier Valley. This was the last project selected for inclusion, and that decision mainly seemed to come from the project’s cost. The original estimate for this project came in at nearly $2.2 million. This is due to the large number of concrete curb bulbs that were in SDOT’s design concept.

After the designs were released, community members have announced that they believe the improvements to be more “Cadillac” than they were looking for, and that they would settle for more of a “Corolla”. The concepts that SDOT completed for this area will therefore need to be scaled back in order to fit in the remaining slice of the NSF pie.

The committee also selected a project to fill in if any project funds become available, either because projects come in under budget or it other projects become unfeasible or funded elsewhere. They selected projects along S Henderson St in the Rainier Valley. This is actually three projects in one, with total NSF funds needed for completion around $1 million.

The most likely to be funded would probably be project B above, which only costs $125K and would pay for crossing improvements at 52nd Ave. Project A, however, improvements at Henderson and Rainier, are obviously the big kahuna here and are slated for possible Vision Zero, Bike Master Plan, Pedestrian Master Plan, and Safe Routes to School funding.