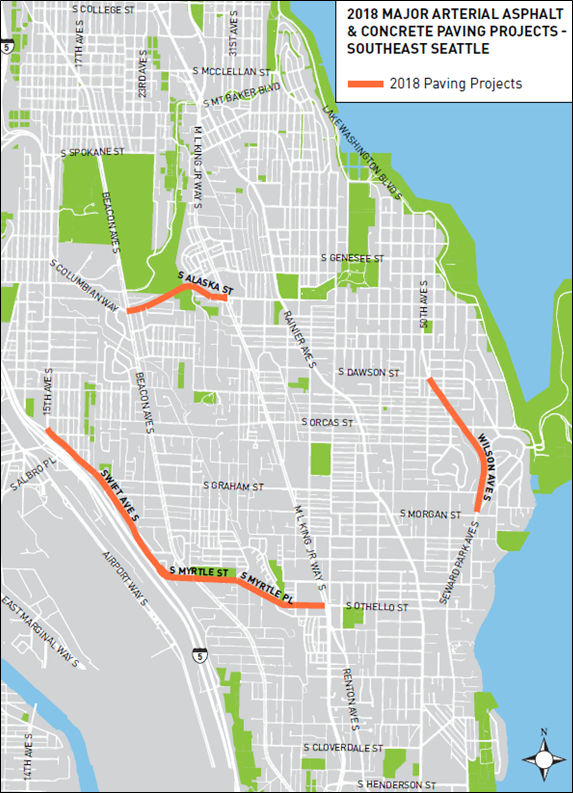 In recent years, street paving projects have taken on the spirit of Seattle’s Complete Street ethos as a way to fully enhance roadways. Instead of just putting down pavement, SDOT also considers what other street improvements may be need for other modes and possible road safety redesigns. These often include improving the visibility of markings and signage, signals, lighting and landscaping, sidewalks and curb ramps, and stormwater facilities. SDOT has selected the following corridors for paving and streetscape improvements:

Compared to the Northeast Seattle paving corridors, the Southeast Seattle streets that SDOT has picked are markedly more concerning from a speed standpoint. Each of the the Southeast Seattle corridors currently experience speeds above the posted speed limit. The lowest average speed is at 32 mph (Wilson Ave S) in the 85th percentile (the speed at which 85% of motorists drive at or below)–2 mph above the speed limit. Shockingly, two corridors clock in at more than 5 mph over the speed limit. Swift Ave S has an average traffic speed of 38 mph–8 mph over the speed limit–which is likely due to the combination of a hill, few conflicts at the edge of the road, and the fact that it leads directly to I-5. And the highest traffic speed is found on the S Columbian Way and S Alaska St corridor which averages 39 mph, a full 9 mph over the posted speed limit.

A common theme with each of the three draft streetscape concepts for the Southeast Seattle paving projects should be fairly apparent: smaller lanes, improved bike facilities, and street designs that will likely push roadway speeds to fall.

SDOT has selected a 0.8-mile stretch of Wilson Ave S for new paving work. The corridor lies between S Dawson St and Seward Park Ave S. The street has wide travel lanes, on-street parking located on both sides, planter strips, and sidewalks along most of its length. The current street redesign concept would tighten up the roadway by adding bike lanes on both sides of the street. Parking would be removed from one side of the road to free up some room for that purpose. One bike lane would be buffered from the main roadway, but the same bike lane would also be within the door zone of parked cars. Swapping the location of the buffered bike lane and on-street parking area could marginally improve safety, but might unwittingly invite motorists to park in the bike lane. So there is a possible tradeoff in a swap.

SDOT has also selected a two-mile corridor that traverses New Holly and the south end of Beacon Hill. A combination of road segments on Swift Ave S, S Myrtle St/Pl, and S Othello Street stretch from I-5 to MLK Jr Way S. The Swift Ave S segment is a fairly weathered roadway. Sidewalks have become overgrown by weeds, trees, and bushes, and impacted by debris. In fact, much of the west side of the street is inaccessible to pedestrians despite a paved sidewalk. Bike lanes have also been added to the street in recent years stretching all the way to Beacon Hill and Othello.

Conditions are markedly better for pedestrians on S Myrtle St and S Myrtle Pl as the corridor arrives in a more urban context, though sidewalk separation from the roadway is still modest and some sidewalk sections are thin.

The corridor segment in Othello is constructed to a much higher standard with wider sidewalks, full planter strips, curb extensions at intersections, interior pockets for on-street parking, and bike lanes. Those streetscape improvements were largely delivered as part of the major reinvestment in new development over the past decade or so.

SDOT’s draft concepts for Segments 1 and 2 are very similar to each other. The roadway on Swift Ave S and S Myrtle St/Pl would be tightened further than it already is by adding protected buffer lanes with flexible posts along the current bike lanes. The width of the bike lanes would also increase by a couple of feet to improve the overall comfort of the riding environment.

Segment 3 could see modest changes with an upgrade to protected bike lanes and a slightly tightened street. On-street parking on the south side of the road could be swapped with the current bike lane and separated by a buffer lane with flexible posts. This design could improve the overall comfort and safety for biking on the segment, but the configuration of intersections might make the bike lane/buffer lane/on-street parking lane arrangement more of a nuisance to the regular bike rider. That’s because curb bulbs are present at each intersection between Holly Park Dr S and MLK Jr Way S, and the interior on-street parking strips are so short. Bicyclists would have to weave sharply back and forth to maneuver them.

Lastly, SDOT is planning to invest in a half-mile segment of roadway between Beacon Ave S and MLK Way Jr S. Conditions on S Alaska St and S Columbian Way are mixed.

Closer to MLK Way Jr Way S, the street has planter strips, sidewalks, and pavement that are in fair condition or better, particularly on the north side of the street. The roadway also has on-street bike lanes that are marked, but they don’t come with physical separation. The southern side of the street, however, is in a decidedly poorer condition for sidewalks, which are cracked, covered in rocks and debris, and at-grade with the roadway. The extension of S Alaska Pl into the main street further presents an unsafe intersection since it forms a large “Y” paved area merging into an arterial curve. That design unwittingly creates potential conflicts between faster moving cars and the bicyclists and pedestrians that might be traveling on the south side of S Alaska St.

Further up the corridor, conditions of S Columbia St are comparably better. For a small stretch there is a bicycle lane buffer on the north curve of the street and a median barrier.

Near Beacon Ave S, however, the quality of the street degrades considerably. The roadway surface is cracked and patchy, in-street bike lanes are not protected or buffered, sidewalks are at-grade, and the area between the roadway and sidewalks are a mix of unmaintained planter areas and gravel/asphalt on-street parking.

SDOT is proposing to use three general approaches for the roadway segments. Segment 1 would have two variations with one including protected bikes lanes and planter strip (Cross Section B), and another that would be buffered bike lanes and on-street parking (Cross Section A). To make this work, the center turn lane would be removed to trim down the main roadway. Meanwhile, Segment 2 would use the same approach as the Segment 1 Cross Section B design.

SDOT plans to hold another round of open houses in early 2017 in an effort to get community feedback on the corridor designs. Following on from that, the agency will make further design refinements before releasing them in late 2017. Commencement of the paving projects will, of course, take place in 2018. If you have feedback on the street design concepts, you should contact Dan Anderson, SDOT Communications Lead, at dan.a.anderson@seattle.gov.