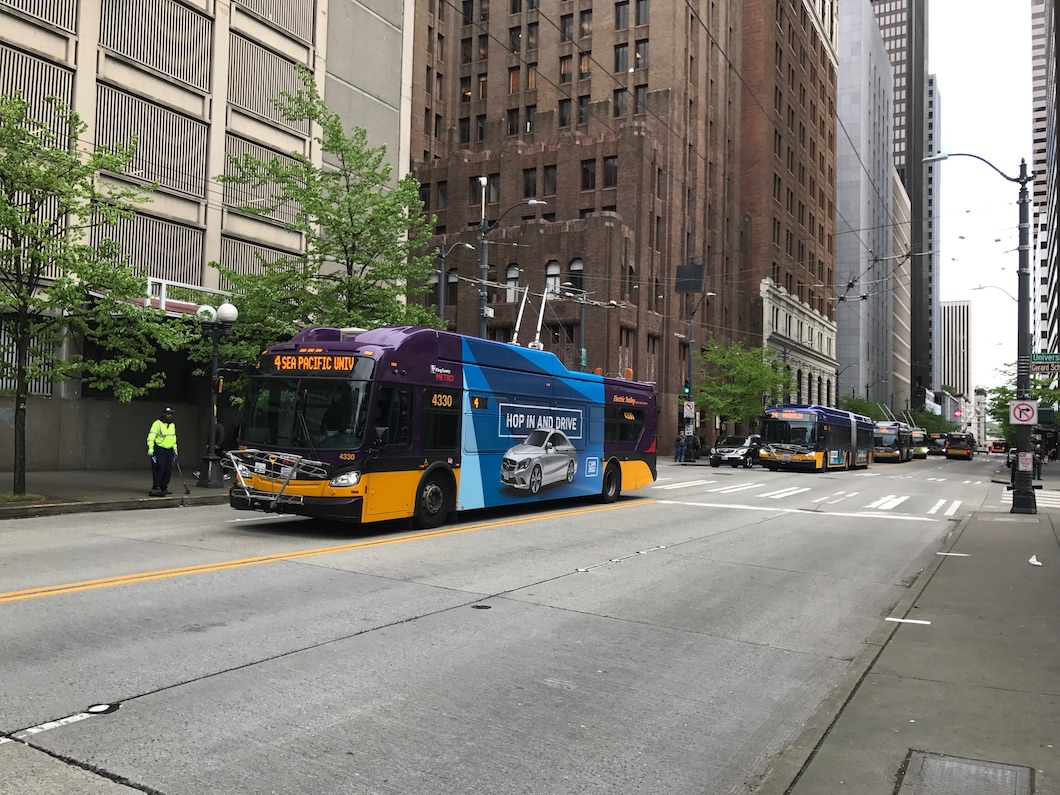 The second annual performance report on the Seattle Transportation Benefit District (STBD) was released this week. The report highlights local investments in transit service, ridership and on-time performance, access to frequent transit, and transportation equity initiatives such as the Youth ORCA Program and ORCA LIFT.

Seattle voters passed Proposition 1 in 2014 that authorized a special vehicle license fee (VLF) and sales tax to fund transit service in Seattle. A $20 VLF had already been on the books at the time, but voters upped by that by $60 and added 0.1% to the sales tax in an effort to stave off deep bus service cuts. At the time, King County Metro Transit was facing funding shortfalls after exhausting reserves during the Great Recession when sales tax receipts were in decline, but by the time voters okayed the measure the proposal had flipped into one of service expansion to serve a growing city. Now that we’ve seen two years of investment in local transit service, we can see that the investment has paid off.

The report is chalk full of graphics explaining how the STBD is delivering on system improvements, not just keeping the status quo.

Summing up the second year, the STBD reports that access to frequent transit service is way up from where it was in 2015 and surpassing current goals. Additionally, nearly 2,700 youth participated in a free transit pass program, and ridership on several RapidRide lines is up by double digits since 2015. Leading the pack in growth was the RapidRide C which grew 40% since 2015, averaging 11,600 daily rides by last count.

In the first year of the STBD, the city invested the equivalent of 270,000 annual service hours into the Seattle bus system. That was spread across 68 routes, boosting frequency on a lot of routes and restoring others (e.g. Route 47) that had been eliminated. Service hours also went toward reducing crowding at peak times, improving on-time performance, and making routes more frequent when demand is highest. The STBD has put a particular emphasis on some core routes such as the 5, 10, 48, and RapidRide C and D Lines. Annual service hours paid by Seattle now total more than 308,000, an astounding sum that in a number of cases is backing more than 30% of the total service hours for city bus routes.

Transit ridership is seeing healthy growth in Seattle. A significant amount of this has been on frequent transit bus routes and light rail. In fact, bus-based transit has seen some of the largest gains on the RapidRide C, D, and E Lines. The RapidRide C Line, for instance, has experienced a 40% growth in ridership since 2015. This growth was partially induced by 71,000 additional service hours (21% of the new service hours funded by the STBD in 2015-2016) that were showered onto the RapidRide lines during the first year of STBD investments. The net result was more frequency and higher ridership. But another feature of ballooning transit ridership has been led by light rail with more than 100% growth since 2015. Two new stations in Capitol Hill and at the University of Washington are the primary drivers of that.

The STBD is arguably responsible for much of the late-night bus network (or Night Owl Network) that Seattle has today. In 2014, much of the Night Owl Network was proposed for deletion but the STBD saved it. This fall, the STBD led the effort to reform the Night Owl Network significantly by providing service to many areas of Seattle not previously covered before. Seattle bankrolled extended service hours on Routes 3, 5, 11, 44, 48, 65, 67, and 70. King County Metro Transit also chipped in with added service on Routes 120 and 124. No longer do riders late at night have to consult a different schedule and route map from normal times of day. Instead, the reformed system provides consistent operations with all-day routes and allows for connections outside of the city center.

Seattle has been highly successful in enrolling low-income residents into the ORCA LIFT program. Year-over-year, the percent of eligible residents enrolled in the program rose from 11% to 19% in Seattle. Elsewhere in King County, enrollment is lagging with less than 10% of residents participating in the program. The increase in enrollment is intentional with the city pushing advertising of the program through a variety of mediums (e.g., billboards, radio advertisements, and Facebook promotions). The STBD also offers ORCA LIFT cards with pre-loaded funds up to $15.

A less noticeable aspect of the STBD is the efforts in supporting youth access and ridership on city bus routes. The program started from local efforts at Rainier Beach High School to encourage transportation access for students. Eventually there was a push to get the city to focus on youth transportation accessibility leading to the creation of the Youth ORCA Program in 2016 as a mean to offer free youth transit passes during the school year. The performance of the program is showing some promising results with the number of participating youth and rides way up–over 800% from the first half-year. Youth are also saving substantial amounts of money in transit fares (approximately $240 per participant).

The program is generally geared toward students in middle school and high school who do not qualify for the Seattle Public Schools ORCA card and who are part of households below 200% of the Federal Poverty Guidelines. However, the program was expanded over the summer with a reduced transit fare option for youth generally.

Youth participating in the Youth ORCA Program have a variety of reasons for using transit passes. Outside of travel to school, youth surveyed believe the biggest benefits of the pass is staying socially active and putting less pressure on family to transport them. Many youth participants report using their Youth ORCA cards to get them to work (34%), shopping (39%), and after school activities (69%). In the summer time, surveyed youth participants believed that the pass would be instrumental in staying active (65%) and getting a job (47%). These numbers are encouraging showing that participating youth are using transit for more than just school commute; they’re using transit as a feature of normal daily life, too.

It is hard to imagine where bus service in Seattle would be right now without the STBD. We likely wouldn’t be seeing the drive-alone commute rate to Downtown Seattle drop to its lowest ever level, with more and more residents switching to different modes all the time. While overcrowding on buses and off-peak frequency remains an issue, the STBD has allowed many more Seatteites to depend on transit to get where they need to go.

You can browse the full two-year performance report below. The issue of what is next for the transportation benefit district in the long-term is something that many transit advocates are interested in, and I will have more details on that subject that come from speaking with SDOT’s Transit and Mobility Director, Andrew Glass-Hastings, later this week.