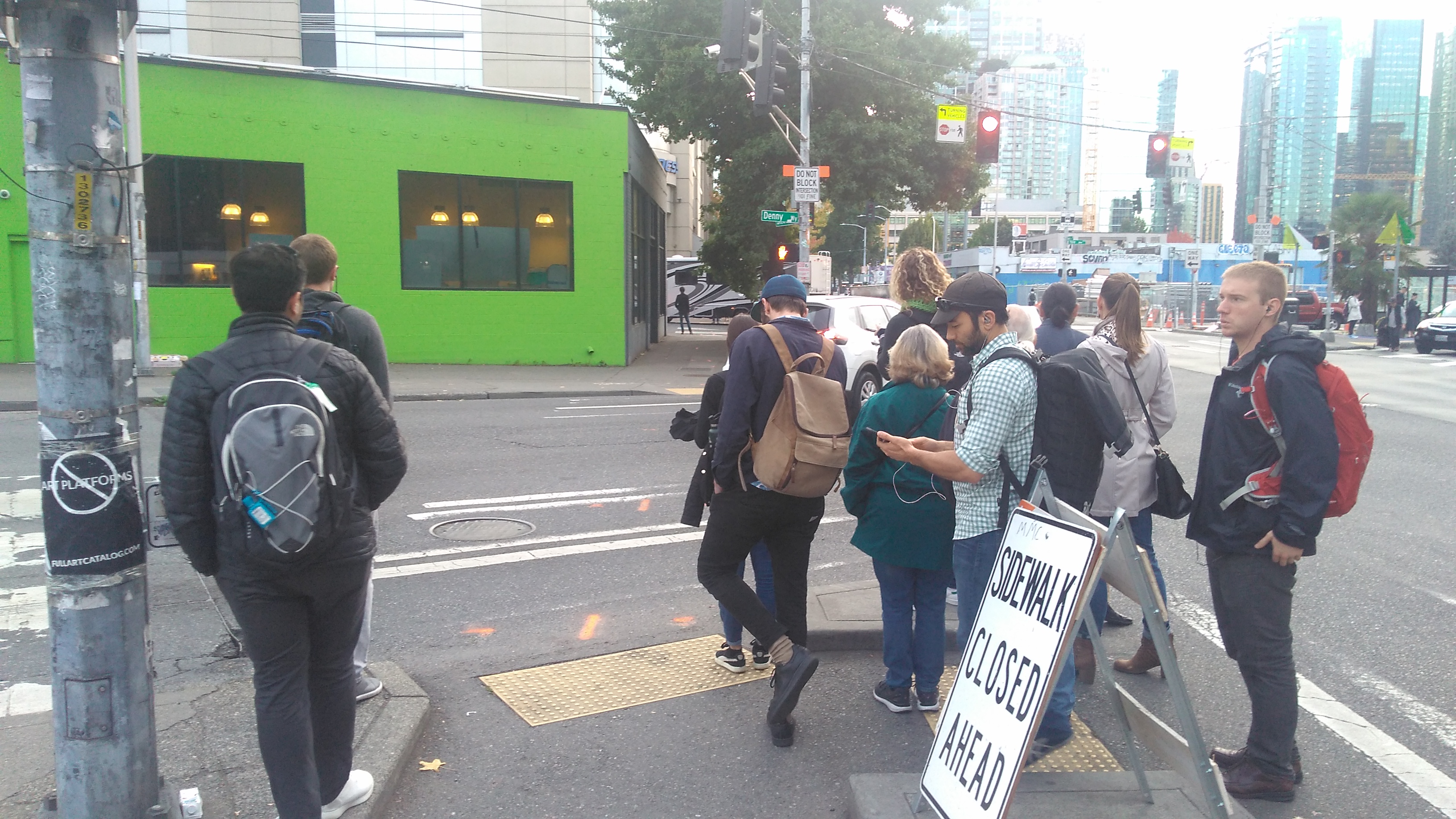 In April, I wrote about the failure to turn Seattle’s high tech corridor in North Downtown away from being a car-centric office park and into a neighborhood for people. South Lake Union is for cars, I wrote then. This summer, Mark Ostrow demonstrated exactly how some of the investments in car infrastructure—coming after the $140 million investment in “fixing” Mercer Street—are prioritizing cars over people. So much parking for cars is being built in new South Lake Union buildings that it’s not surprising that the neighborhood has a lot of traffic. Currently congestion is the main deterrent to driving in South Lake Union, which doesn’t make for a pleasant area to spend time in.

But a recent survey conducted by the Seattle Department of Transportation (SDOT) caught my eye. The survey, conducted over eight days in spring of this year, asked people who were walking in South Lake Union at a variety of locations how they got to the neighborhood that day.

According to the survey results, 22% of the people who didn’t live in the neighborhood said they got there by walking. Now, the fact that this was a sidewalk survey is not lost on me, but the fact that, according to this, as many people walked to South Lake Union as took the bus is a notable result.

It’s not a particularly stellar result—note that in SDOT’s sidewalk previous intercept surveys, 38% of University District respondents and 48% of Pike/Pine residents said they walked to the neighborhood. But it’s a glimmer of hope.

Sure enough, according to Commute Seattle’s 2016 commute trip survey data, which only looks at employees who start work between 6am and 9am at businesses large enough to be targeted by the commute trip reduction (CTR) program, found that South Lake Union had the highest number of people who walked to work (9.3%), on par with Pike/Pine and almost double the rate in the central Downtown commercial core.

South Lake Union is actually pretty hard to walk to: with Aurora Avenue not breachable for several blocks between Denny and Mercer, and I-5 forming a barrier on the east between Denny and Lakeview boulevard, pedestrians often have to go far out of their way to get where they need to go, which can be slow on foot.

On the other hand, transit agencies have been slower to directly serve South Lake Union, and even slower to provide transit service priority in the neighborhood. The South Lake Union Streetcar, RapidRide C Line, and Route 40 finally have dedicated bus lanes along Westlake Avenue, but daily these transit routes are slowed by the “adaptive” signaling that prioritizes private vehicles on Mercer Street over these high ridership bus lines running perpendicular to it. Furthermore, the buses are caught in the same traffic that the adaptive signal program is inducing in the corridor. Might a factor in South Lake Union’s high pedestrian commute rate be that those commuters have simply given up on transit?

The Seattle Times jumped the gun earlier this fall when it reported that a bus lane along Denny Way would be added between Fairview and Stewart Streets in short order. They later had to retract their reporting when it was revealed that the Seattle Department of Transportation did not, in fact, have permission from Seattle City Light to repaint the lanes alongside the new substation at Minor Avenue N. We reported on this short bus lane last year as it began planning stages. When it does finally get implemented next year, it should make some difference for one of the most perpetually late buses in Seattle, but it will not magically turn the Denny Way I-5 parking lot into a speedy transit corridor.

In August, SDOT installed a $100,000 pedestrian signal across Denny Way at Terry Avenue. This pedestrian “half signal” only changes when users request to cross using the button and after a long wait. The crosswalk for pedestrians was only added to one side of the intersection, under the fear that drivers may not always stop in time when traveling downhill.

New crossing at Denny and Terry. Build it and … family heading to crosswalk pic.twitter.com/TotH59v0kQ

The crosswalk didn’t do a single thing to slow traffic on Denny Way, a high volume, high traffic corridor that is intimidating to pedestrians to walk along, even though there isn’t any alternative for east-west travel between Capitol Hill and North Belltown, really.

In early October, as part of improvements to speed up Route 8 in conjunction with the new planned bus lane, SDOT installed barriers that prevent cars from turning left at several key intersections, namely at that pedestrian signal at Terry Avenue as well as 8th Avenue to the west.

Route 8 and zing safety improvements at Denny and Taylor pic.twitter.com/b3uhvGl39k

These restrictions are primarily beneficial to pedestrians along Denny, who no longer have to contend with traffic turning from three directions at these intersections. But the primary motivation for their installation was to improve bus operations. Meanwhile, one block away at Westlake Avenue, the signalization that was installed when the bus-only lane went in along that corridor means that pedestrians still have only 15 seconds to cross Denny per cycle, and drivers can still turn right into the crosswalk when pedestrians have the green, despite a 15 second right turn phase and a 15 second left turn phase from Denny. Westlake and Denny is an intersection that accommodates dozens of pedestrians per cycle, with a crosswalk frequently blocked by vehicles that had been sent into the intersection by green turn arrows.

It is time to start thinking about mobility improvements from the top of the mode pyramid (namely pedestrians). If well designed, these improvements will “trickle down” like no tax plan ever will. People are walking to work in South Lake Union despite the walking environment, not because of it. Imagine what the neighborhood could look like if we invested in the infrastructure to actually make walking enjoyable.