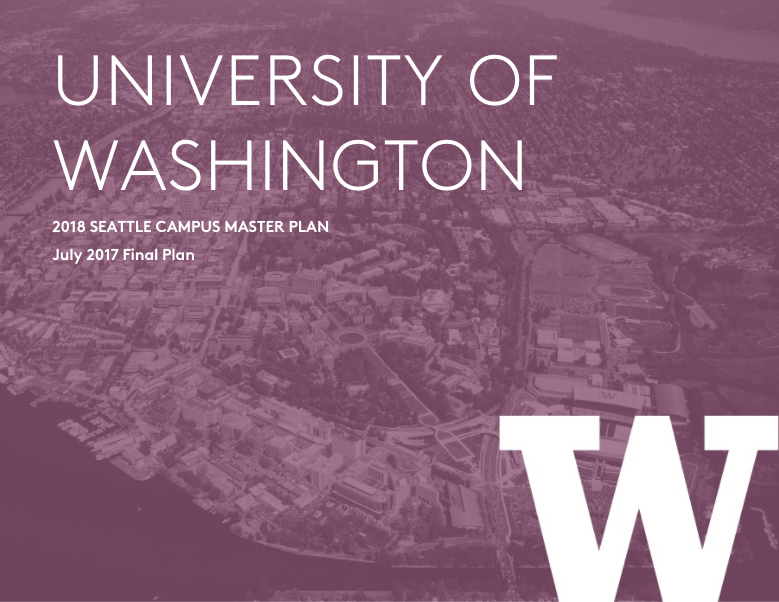 The process to update the master plan began last year when the University of Washington published its Draft Environmental Impact Statement (DEIS) outlining its overarching objectives for redevelopment of the main campus. The university intends to build an additional six million square feet of housing, educational, commercial, community, and supportive space above the current development cap on the main campus. The university estimates that space needs at the main campus will grow through 2028 as another 8,675 students and 4,649 faculty are added. That equates to 20% growth over the total student and faculty population of 67,155 today. In July, the University of Washington published the Final Environmental Impact Statement (FEIS) and 2018 Seattle Campus Master Plan updating plan elements in response to comments from the DEIS.

The main campus is broken up into four main sectors with 86 potential development sites:

In terms of zoning, the campus master plan envisions a range of building heights as low as 30 feet near the water and as high as 240 feet near the core of the University District. The proposed zoning would substantially increase allowed building heights–and thereby allowed building square footage–in select areas of university’s Major Institution Overlay (MIO), a special zoning for institutional uses like the University of Washington. However, most of the proposed zoning is designed to transition carefully with adjacent properties outside of the university’s MIO.

SDCI is recommending 61 conditions on the master plan, most of which modify certain master plan attributes proposed in the FEIS. However, a bit more than a dozen proposed conditions would act as mitigation measures under State Environmental Policy Act (SEPA). The city has substantive authority to attach conditions under SEPA in order to lessen the impacts assumed by a proposal. The following summarizes some of the key conditions contained in the recommendation:

Last week, community leaders and staff for the University of Washington raised legitimate concerns over the recommendation and university’s proposal. Leading the campaign for a more holistic proposal is the U District Alliance for Equity and Livability. They released a blistering statement against the recommendation going as far to say that the city should completely renegotiate its agreement with the University of Washington due to the recent Washington State Supreme Court ruling allowing the city to fully extend its land use regulatory authority on campus property.

On transportation access and impacts, the Sierra Club’s Bill Roach highlighted how the University of Washington’s proposal could fail to keep buses moving and continue to leave employees behind. “Even if it meets its own traffic reduction goals, the UW admits that 11 out of 13 key U District intersections will be gridlocked (Level of Service E or F) with almost five times more vehicle delay,” Roach said. “The City recommendation today would let them get away with this traffic nightmare for the U District and for transit riders. The UW needs to get those extra commuters on transit, and that means the UW needs to join other major employers like Children’s Hospital and provide free transit passes to employees.”

Environmentalists and university staff have long pushed the university to fully fund the U-Pass transit card for employees, so far to no avail. University employees cover a significant proportion of the transit pass costs under the current U-Pass program. University staff also lack access to free bike lockers on campus.

John Castle from the Low Income Housing Institute harshly criticized the scale of affordable housing proposed. “We know what tiny is because we build tiny houses–this is a tiny commitment for a huge institution with thousands of low-wage employees,” Castle said.

Bereket Kiros, a member of the Coalition of Immigrants, Refugees, and Communities of Color, raised concerns over racial equity and displacement. “Immigrants and communities of color were not consulted in the UW’s plan, which will result in more housing displacement for immigrants,” Kiros said.

Under the city’s Mandatory Housing Affordability (MHA) program, rezones are being paired with mandatory inclusionary requirements to build affordable housing on-site or pay a fee in lieu to the city for affordable housing. Generally, the affordable housing requirements are 5% to 10.6% of total square footage for commercial development. Even under the lowest set aside requirements, the University of Washington would be required to provide hundreds of additional affordable units over the baseline proposal if MHA was applied to the university properties.

In addition to these issues, community members and staff have consistently advocated for more childcare near the campus. The master plan does discuss the issue at length suggesting that the ratio of childcare spaces to campus population would eventually fall within the band for other peer universities, but cost of childcare and the severe shortage remains a serious issue for students, faculty, and staff.