The Puget Sound Regional Council (PSRC) has adopted a new framework for identifying and designating Regional Growth Centers (RGCs) and Manufacturing/Industrial Centers (M/ICs) in the counties of King, Pierce, Snohomish, and Kitsap. The new framework is an important step as the PSRC moves forward with updating VISION 2040, the regional comprehensive planning policy guide. Existing RGCs and MICs are slated to remain while new ones could be designated in the years ahead, including county-level ones of local significance but not regional significance. For the first time, military installations and tribal centers and lands could get recognition and designation in the VISION 2040 update process, too.

The new framework is fairly similar to the one shared in the fall, except that the designation criteria for RGCs was slightly adjusted and includes a minimum mix of uses to qualify. M/ICs now have more explicit criteria regarding access to transit service, and the update revamped guidance for Countywide Centers with new criteria. Existing RGCs and M/ICs will be automatically redesignated as part of the VISION 2040 update process according to the new criteria, but could be reconsidered in future years after performance monitoring is completed in 2025.

Under the new framework, Regional Growth Centers will come in two flavors: Urban Growth Centers and Metro Growth Centers. The bar to qualify for Metro Growth Centers is much higher since these are expected to function as very productive areas such as Downtown Seattle and Downtown Bellevue. There are several factors to designate an area as either type of RGC, such as existing and planned densities, mix of uses, geographic size, market potential and role, and access to planned and existing transit:

At a minimum, counties and cities proposing RGCs will need to demonstrate that they have a local commitment to plan for and support and sustain investment in the respective RGCs as functioning communities. Local conditions of the proposed RGCs must have adequate infrastructure invested in them to ensure that they can be viable as places for housing and jobs. In terms of their shape and size, the PSRC guidance recommends that RGCs “be nodal with a generally round or square shape and avoid linear or gerrymandered shapes that are not readily walkable or connected by transit.” The PSRC generally recommends RGCs occur exclusively in cities, except that unincorporated areas that have access or planned to have access to Link light rail may also qualify.

In designating RGCs, the PSRC will take several other factors into account, such as the number and viability of RGCs distributed throughout the region and at the county level, whether or not a new RGC would be beneficial to regional objectives, and consistency with growth management goals. The designation of new RGCs is intended to only be limited to major updates to VISION 2040 and every five years thereafter. The cutoff for RGC applications for the upcoming major update is slated to be late 2019.

Like Regional Growth Center, the new framework will have Munfacturing/Industrial Centers come in two flavors: Industrial Employment Centers and Industrial Growth Centers. The PSRC is setting a much higher bar for areas to be designated as Industrial Employment Centers as they functionally have very active and heavy industrial uses often associated with traditional industry. Examples of these types of areas include the Duwamish Manufacturing/Industrial Center and Paine Field. Under new guidance, there are several factors to designate an area as either type of M/IC, such as existing and planned jobs, percent of industrial jobs, amount of zoned land for key industrial use types, existence of strategic industrial uses that are irreplaceable, and access to planned and existing transit or commute trip reduction options:

Also similar to RGS, the PSRC expects local jurisdictions plan for and provide direct transportation investments in M/ICs. The planning piece is integral in M/IC designation applications because local jurisdictions need to show that they actively protecting and preserving industrial use and have systematic programs to encourage industrial uses to locate and succeed. The framework also notes that new M/ICs will ideally be located within cities instead of unincorporated areas and have sufficient size, viability, and access to critical services and infrastructure to function and grow.

Various centers in counties may be of very high local importance. In recognition, the PSRC will allow counties to design Countywide Centers if they meet certain elegibility criteria. The criteria is different for Countywide Growth Centers and Countywide Industrial Centers. Counties will be responsible for processing designations and then submitting them to the PSRC for formal designation on the Regional Growth Strategy map. The eligibility criteria is outlined in the following table: 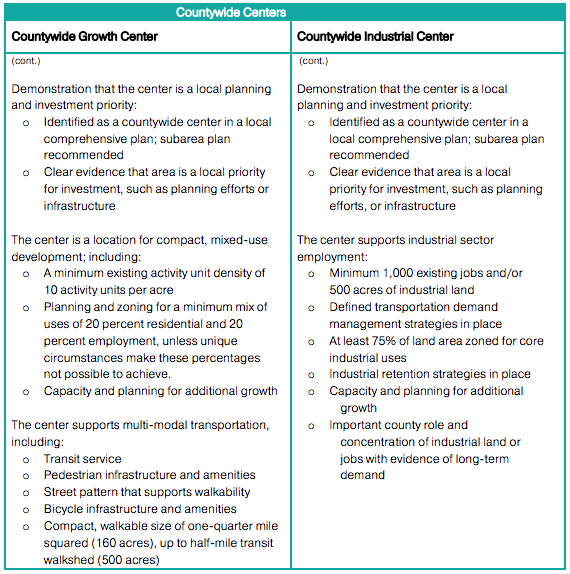 Major military installations will be designated through the VISION 2040 update. The PSRC defines these as installations with 5,000 or more enlisted and service personnel. Four installations currently qualify for this designation, including: Joint Base Lewis-McChord in Pierce County, Naval Base Kitsap–Bangor and Naval Base Kitsap–Bremerton in Kitsap County, and Naval Station Everett in Snohomish County. Smaller installations could still be recognized at the county level for importance and have a seat at that governance level, but not at the PSRC. The PSRC has set out several key objectives for planning in collaboration with major military installations, such as joint land use studies, supporting coordinated multimodal planning and mode split objectives, and delivering multimodal transportation options.

For other centers that may be of hyper-local importance, the PSRC does not expect the Regional Centers Framework to formally designate them under VISION 2040, but they could find their way to designation in future updates if they meet eligibility criteria. “VISION 2040 calls for central places in all jurisdictions to support a centers-based approach to development in the region,” the framework states. “These places range from neighborhood centers to active crossroads in communities of all sizes. These centers play an important role in the region and help define our community character, provide local gathering places, serve as community hubs, and are often appropriate places for additional growth and focal points for services. The Regional Centers Framework recognizes the importance of these places, but does not envision a regional or county designation for all types of local centers. The designation criteria outlined in this document may provide a path to regional or county designation for locations that continue to grow and change over time.”

Over the next couple of years, the Regional Growth Strategy will significantly change as VISION 2040 gets updated to become VISION 2050. The Regional Center Framework is critical to that process since it will inform how future centers get designated and grow as the region continues to fill in along high capacity transit corridors and targeted locations. A lot is at stake with these designations in how cities and counties plan, implement programs, and qualify and receive federal, state, and regional funding.