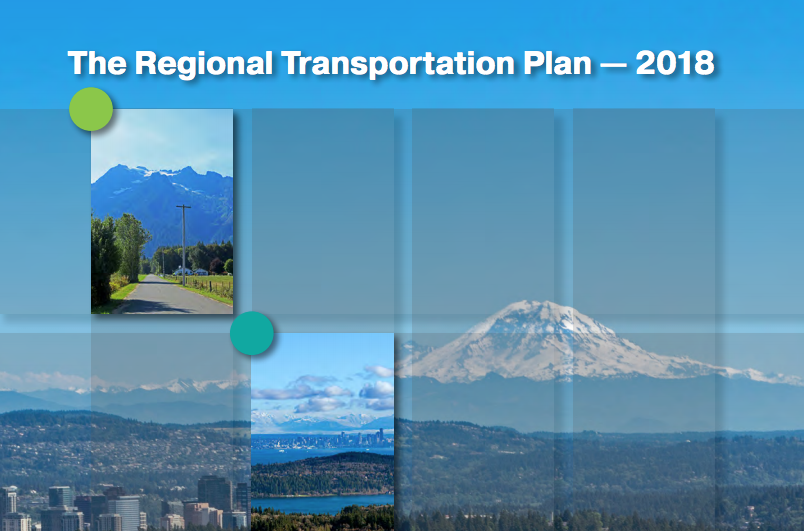 The Puget Sound Regional Council (PSRC) is updating the four-county region’s long-range transportation. Dubbed as “The Regional Transportation Plan — 2018,” the plan makes key regional investments. The plan runs through 2040 and assumes that the population of the Seattle metropolitan area will grow by another one million residents and that 800,000 new jobs will be created in King, Pierce, Snohomish, and Kitsap counties. Travel demand in the region is anticipated to rise another 30%, which would necessitate targeted, high-capacity investments to support such robust growth. A 45-day comment period on the draft plan is open through the end of the month. In the spring, policymakers will approve a final version.

The Seattle Times Editorial Board recently criticized the plan in an article entitled “New Regional Transportation Plan Must Put Pragmatism Over Ideology.” True to form, the editorial board was way off the mark with its opening salvo. “If you like how Seattle plans for traffic congestion, you’ll love the new regional transportation plan that the Puget Sound Regional Council is developing,” the editorial board whinged. The piece from there devolved into complaints over managing demand, data, and timing of the plan.

The truth is, the long-range plan will fund massive road and highway expansions while also employing smart technology to enhance system capacity. The plan will also make wise investments in high-quality transit corridors and key multi-use trails that can move commuters and recreationists alike. Designed to support the “VISION 2040” regional growth plan, the transportation plan would connect Puget Sound communities to regional growth centers, manufacturing and industrial centers, and subregional centers. The plan also places an emphasis on investing in growing transit-oriented communities.

In sum, the basic philosophy of the plan to give people options across modal types. Implementing the plan policies will deliver the biggest bang for the buck while meeting other objectives such as fostering compact and healthy communities, reducing carbon emissions, and providing equitable access to opportunity. As a steward of taxpayer money, it’s the right approach for a regional planning agency strapped for federal funds.

While the Seattle Times Editorial Board would have you think the plan is a sham, the plan would help fund $105.2 billion in maintenance, preservation, and operations of the transportation system through 2040 before even putting a dime in for new infrastructure. Tens of billions more would be focused on expanding and building new highways and transit systems. PSRC has put together a succinct summary highlighting key investments by county. The following diagrams provide a useful window into understanding the planned investments, though one can also peruse an online interactive map or full project list for more detail.

The key highway and road projects speak for themselves, but it’s worth walking through the myriad investments in transit and non-motorized facilities that the plan would help realize. The project costs shown are total estimated project costs (noted in parentheses and italicized), not necessarily the amount pass-through grants that the PSRC would provide to facilitate planning and construction. Year of completion is also highlighted (noted in parentheses and bolded).

The PSRC’s transportation plan would embrace Sound Transit 3 light rail expansions, including: Downtown Redmond (2023, $1.2 billion), Federal Way to Tacoma (2030, $2.3 billion), West Seattle to Downtown Seattle (2030, $1.8 billion), Ballard to Downtown Seattle (2035, $2.9 billion), a new Downtown light rail tunnel (2035, $2.0 billion), Lynnwood to Everett (2036, $3.5 billion), Tacoma Community College (2039, $551.1 million), and Kirkland to Issaquah (2040, $2.2 billion). Infill stations could also be funded and as a carryover, the transportation plan will fund programmed expansions under Sound Transit 2 like East Link, Lynnwood Link, and Tacoma Link. Other major components of Sound Transit 3 would be partially funded by the PSRC, such as the rollout of I-405 BRT (2024, $1.0 billion) and South Sounder capital improvements, including an extension to DuPont (2036, $1.1 billion). Note all costs in parentheses are estimated total costs rather than PSRC portions.

Later years of the transportation plan will unleash another eight RapidRide corridors:

Transit Projects in Other Counties

The transportation plan would provide substantial contributions to many regional trails and multi-use paths throughout the region. Often, these trails connect densely populated areas and can provide direct access to jobs and housing. In other cases further out, the trails are more geared toward recreation, an equally valuable objective. In King County, several trail and multi-use path projects would be partially funded by the transportation plan, including:

In Kitsap County, only one key trail will be constructed. The Sound to Olympics Trail will be fully constructed on Bainbridge Island adjacent to SR-305 (2024, $18 million). Snohomish County is also only slated to get one trail extension funded by the transportation plan, that being the Centennial Trail. The will be extended in two segments: Snohomish to Monroe (2025, $32.6 million) and south of Monroe toward Duvall (2025, $35.5 million). Pierce County would receive larger investments in trails, including:

The comment period on the transportation plan is soon to end. Those who have feedback on the project capacity priority list or the principles of the plan should get comments in by January 31st.