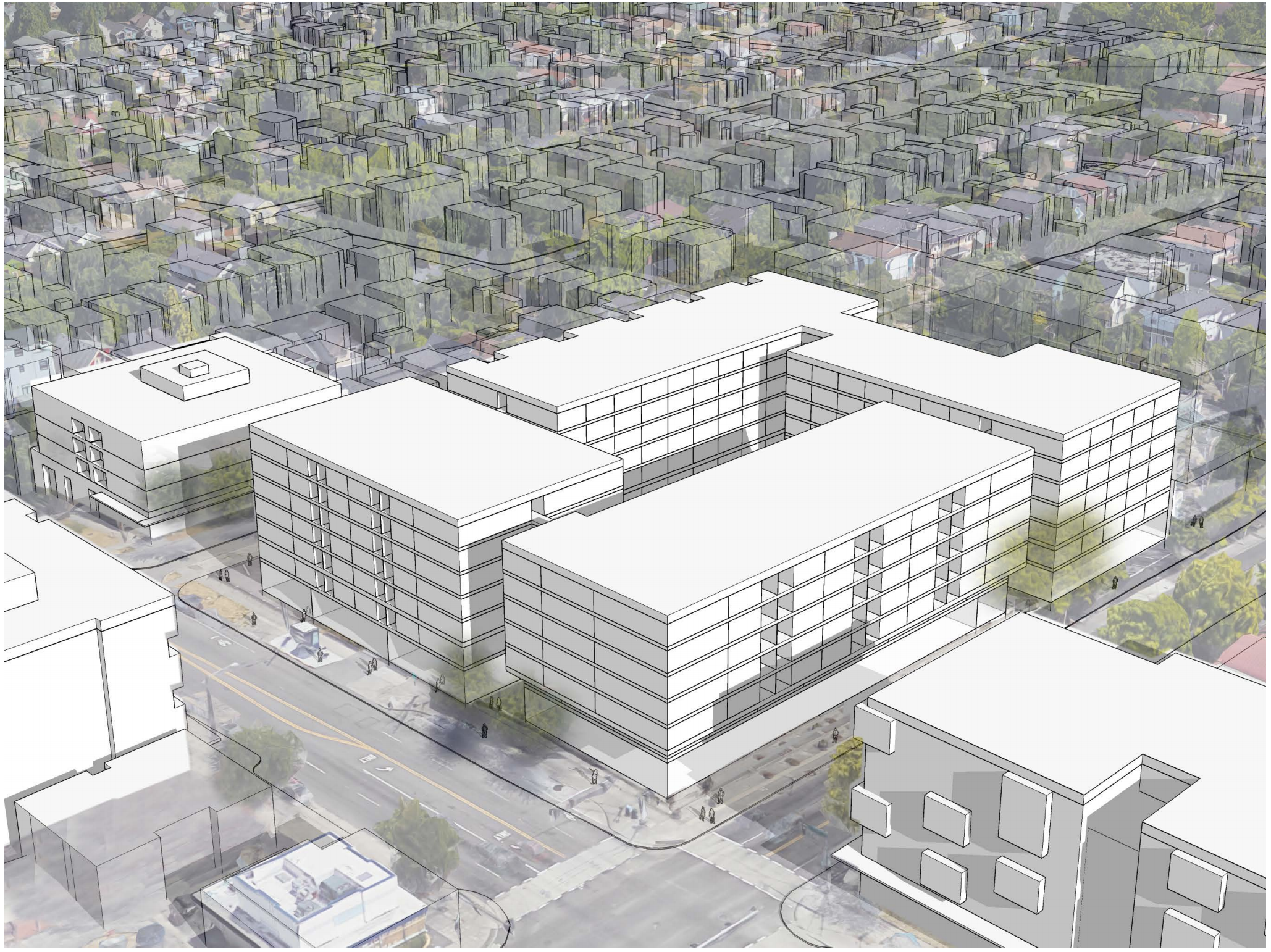 The corner of 23rd and Union in the Central District has undergone dramatic changes in the last few years. It’s seen familiar businesses and churches give way to new stores catering to the areas new more affluent residents. It’s seen its African American and immigrant residents displaced to Kent, Sea Tac and beyond as affluent newcomers move in and rents rise. The corner has been the poster child for neighborhood change in a city full of such cases.

A new upscale apartment building dominates the southwest corner. Across the street another nearly full block mixed-use project with a high end grocery store is going up at the northwest corner. The northeast corner is one of the city’s busiest pot shops–a lucrative white-owned business at a corner where Black kids used to get arrested for selling weed.

Several other new buildings can be found just off the intersection, including the Liberty Bank Building affordable housing project currently under construction. In addition, the city recently completed a significant upzone of the corridor and a major road diet for 23rd Avenue. In the process hundreds of new homes have been added to help meet the demand of Seattle’s growing population.

This brings us to the southeast corner, the current home of MidTown plaza and its collection of small, locally owned businesses, mostly catering to the areas historic African American community and more recent immigrant communities. The property has a long and complex history that includes a family struggle for control, issues of gentrification and who has a right to the neighborhood, and the several attempts at redevelopment. Much ink has been spent covering the property’s past, so I won’t go into it here. Instead we will look at its future: Tonight (January 24th) the latest plan to redevelop the site will be in front of the East Design Review Board for its Early Design Guidance (EDG) meeting. The current incarnation of the project has Lake Union Partners as developer and Weinstein AU as architect. The same team is behind behind the building currently under construction at northwest corner of 23rd and Union, and Lake Union Partners is also responsible for the new mixed use buildings at the southwest corner of 23rd and Union and at the southeast corner of 24th and Union.

It should also be noted that 20% of the original site has been sold to Africatown Community Land Trust, who plan to build affordable housing and community-oriented retail space on their portion. Africatown’s building is also being designed by Weinstein AU and will go through its own review hopefully soon. The for-profit part of the building will also include affordable homes via the Mandatory Housing Affordability (MHA) program and the Multi-Family Tax Exemption (MFTE). 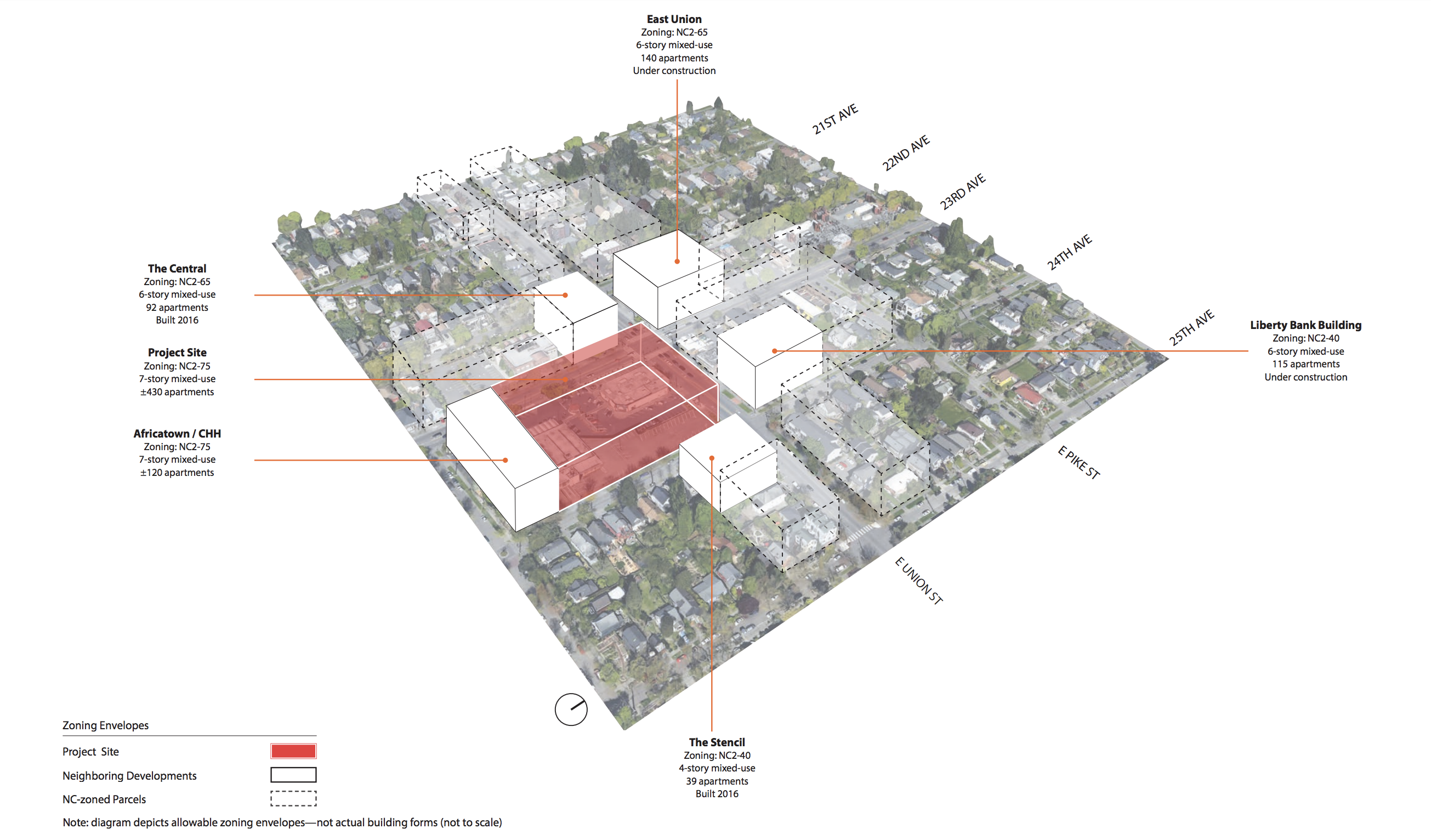 The Early Design Guidance meeting is the first meeting in a two part process and citizens’ best chance to have a meaningful impact on the project. At the EDG meeting the designers will present three schemes for what could be built on the site and show why they think their preferred option is the best. The options are presented largely as blank boxes, because the discussion is to be about how the over all form of the buildings are responding to the site conditions and not about window placement, materials, or other fine grain issues. The review board, composed of five citizens, will listen to the presentation, ask clarifying questions and then take feedback from the public before deliberating on the project. They can then approve it as presented or reject it and have the applicant come back for a second EDG. Either way the board will give guidance of what they want to see more work on and what they think is important.

Citizen feedback can have a huge impact if it is thoughtful and relevant. “I hate it” or “It should be a park” or “It needs more parking” is useless feedback and outside the purview of the board so such feedback is generally discarded. “I want to see nice materials like brick and wood that age well over time” or “The retail spaces should be small so local businesses can afford them” or “We want better public space” on the other hand are the types of recommendations that the board can use to improve a project.

The second part of the review, which will occur in several months, will be the Recommendation meeting. In that meeting the designer will take the chosen scheme and refine it with specific cladding materials and secondary elements like balconies, railings, platers, etc. 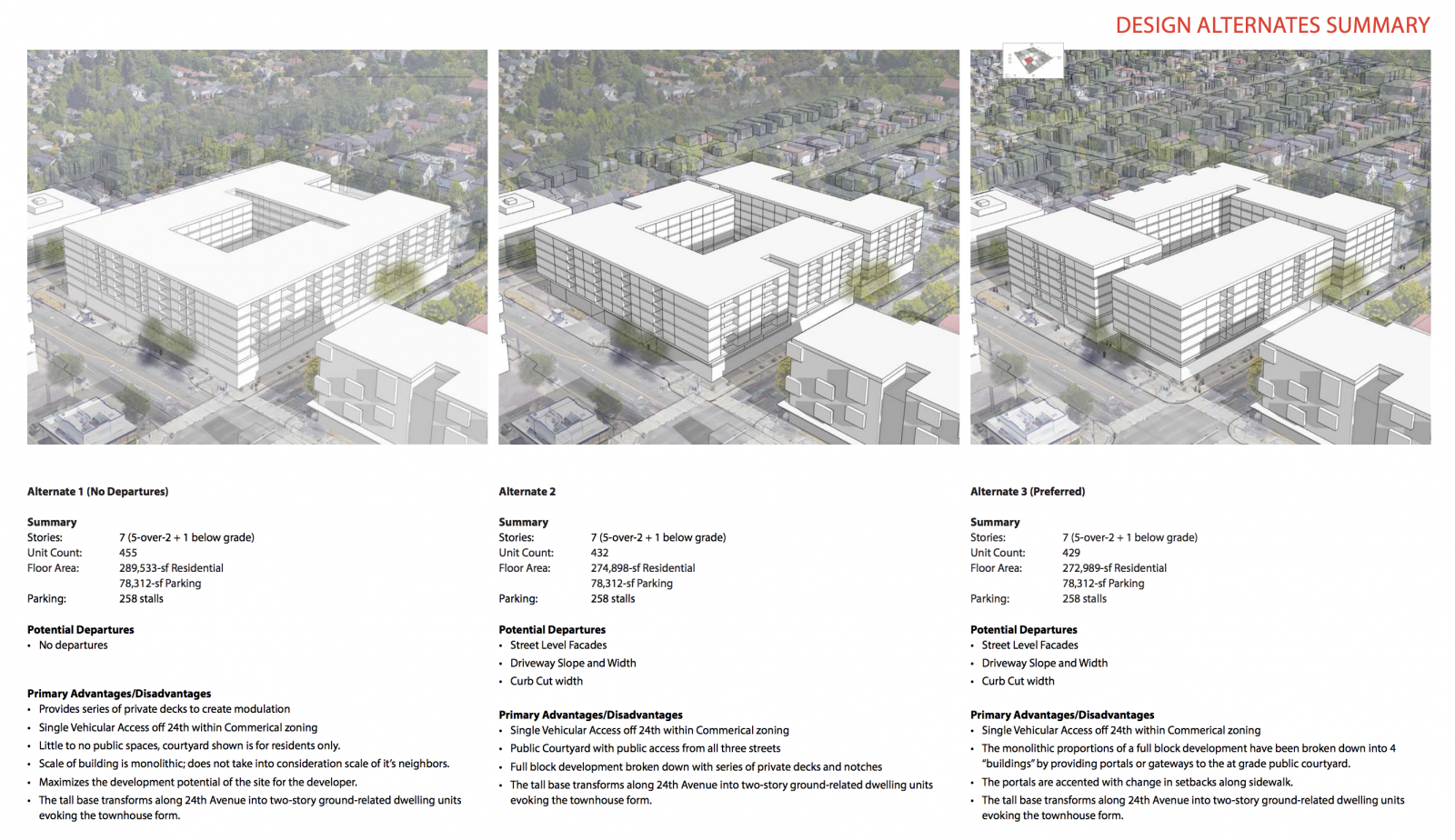 The three schemes being presented on the 24th represent an evolution from most solid to most porous. Each version of the project has roughly the same basic program: ~430 – 450 apartments, 7 stories above grade with one level of underground parking, and ground floor retail and amenity space. All three also reflect the subdued and subtle design sensibility of Weinstein AU, who typically refrain from big showy moves and instead prefer a more low-key use of different materials and recessed balconies to provide interest and scale to a building. The three schemes transition from most solid and closed to most porous and open, with the preferred scheme being the most open. The preferred massing has the project broken down into three, almost four volumes and provides three strong connection from the street into the interior courtyard. They have also pulled the building back at the lower level from the corner of 23rd and Union to provide a more generous sidewalk space. This is addition to all the sidewalks along the property getting substantial upgrades and new street trees. 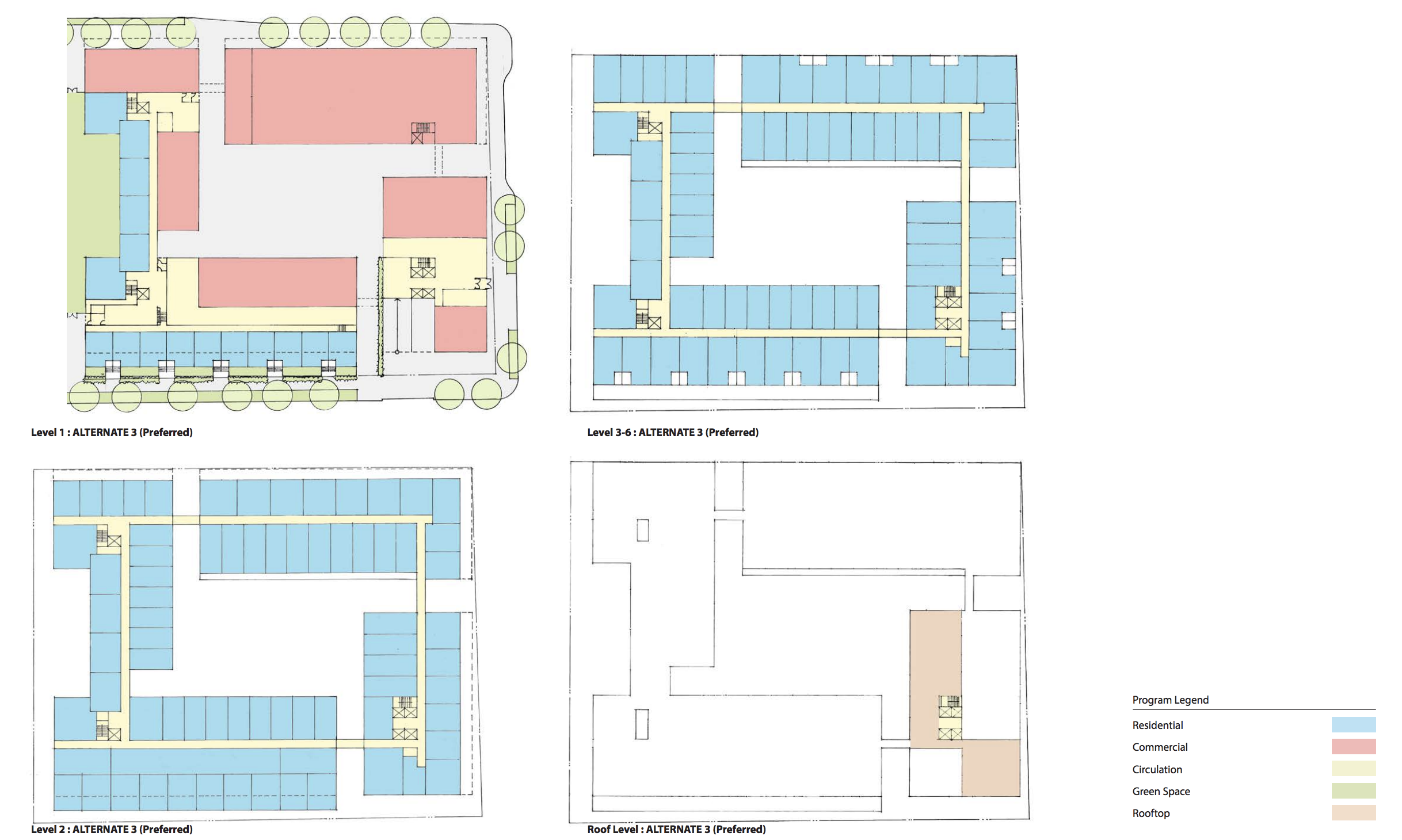 The proposal includes one level of underground parking with 258 stalls accessed off of 24th Ave. The ground floor is mostly retail, amenity space, and lobbies. The retail is shown in the schematic floor plan as one large space at the corner and five smaller spaces along Union and 23rd as well as wrapping the interior courtyard. I was at a talk by the architect the other day, and I seem to recall him saying that the intent is that the large space would help subsidize the rent in the smaller spaces–all possibly subdividable.

The frontage along 24th shows townhouse style units with individual entries. This strategy is also used at several other new projects nearby to help soften the building edge where in encounters its more small scale residential neighbors and activate the street with more entries, stoops, patios, etc. The upper levels are solely devoted to apartments of various sizes and circulation. A small roof deck is provided at the northeast corner for residents. 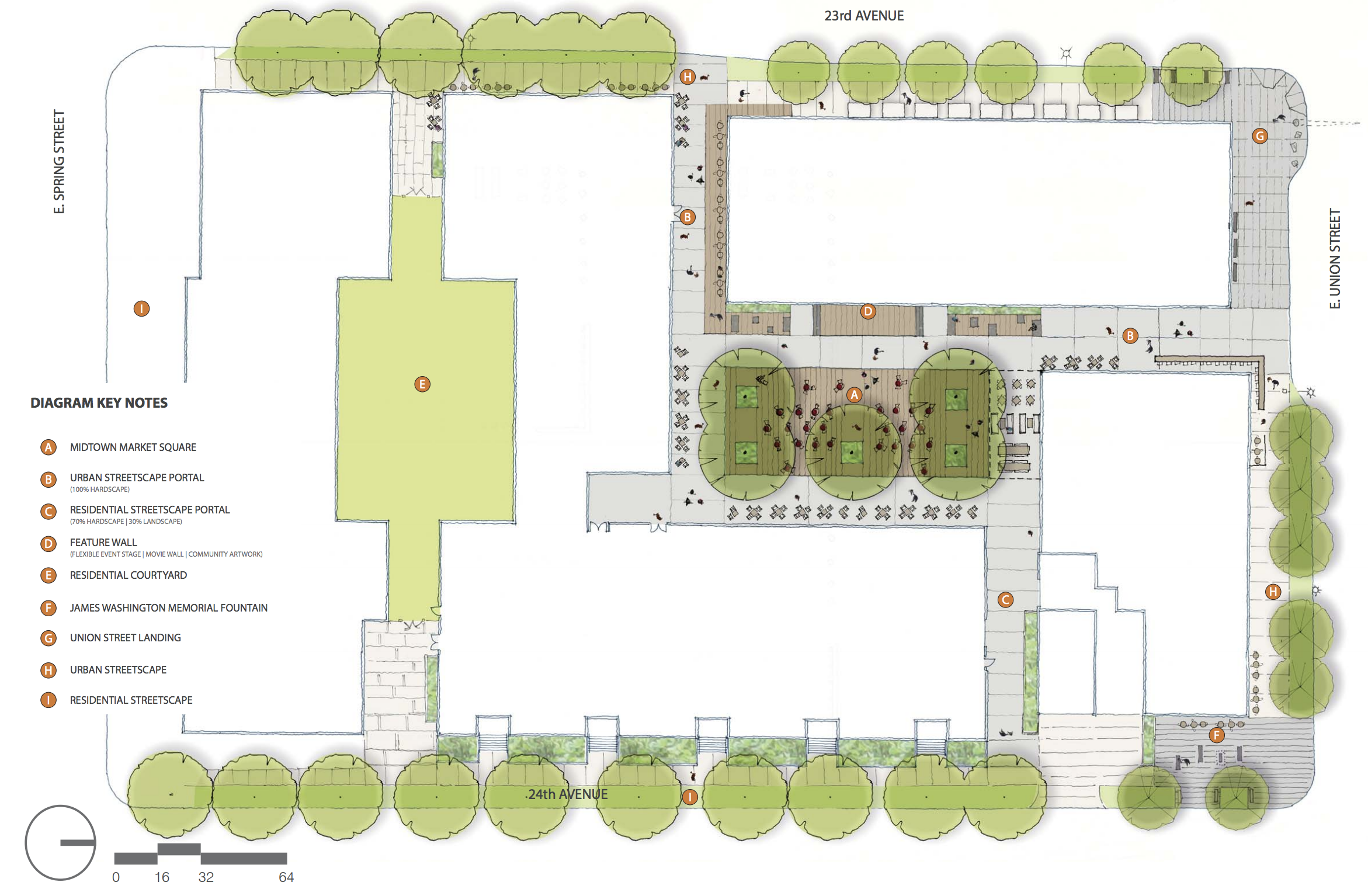 The star of the preferred alternative seem to be the public courtyard. It is a large space and from the packet it seems that the intent is that is be open to non-residents and programmable in many ways depending on the need, season and time of day: performances, restaurant seating, community events, farmers market, etc. As mentioned before it will be provided with what seem to be large passages connecting it to adjacent streets and be wrapped with retail spaces so an effort is being made to activate it. In the end, what occupies those retail spaces will no doubt be key to determining the success or failure of the courtyard. How public the interior space is will also need to be defined and will hopefully be a point of discussion at the EDG meeting. It could be a wonderful new community space courtesy of the developers, or it could be an awkward psuedo-public space that is neither a retreat for the residents or an asset to the neighbors. 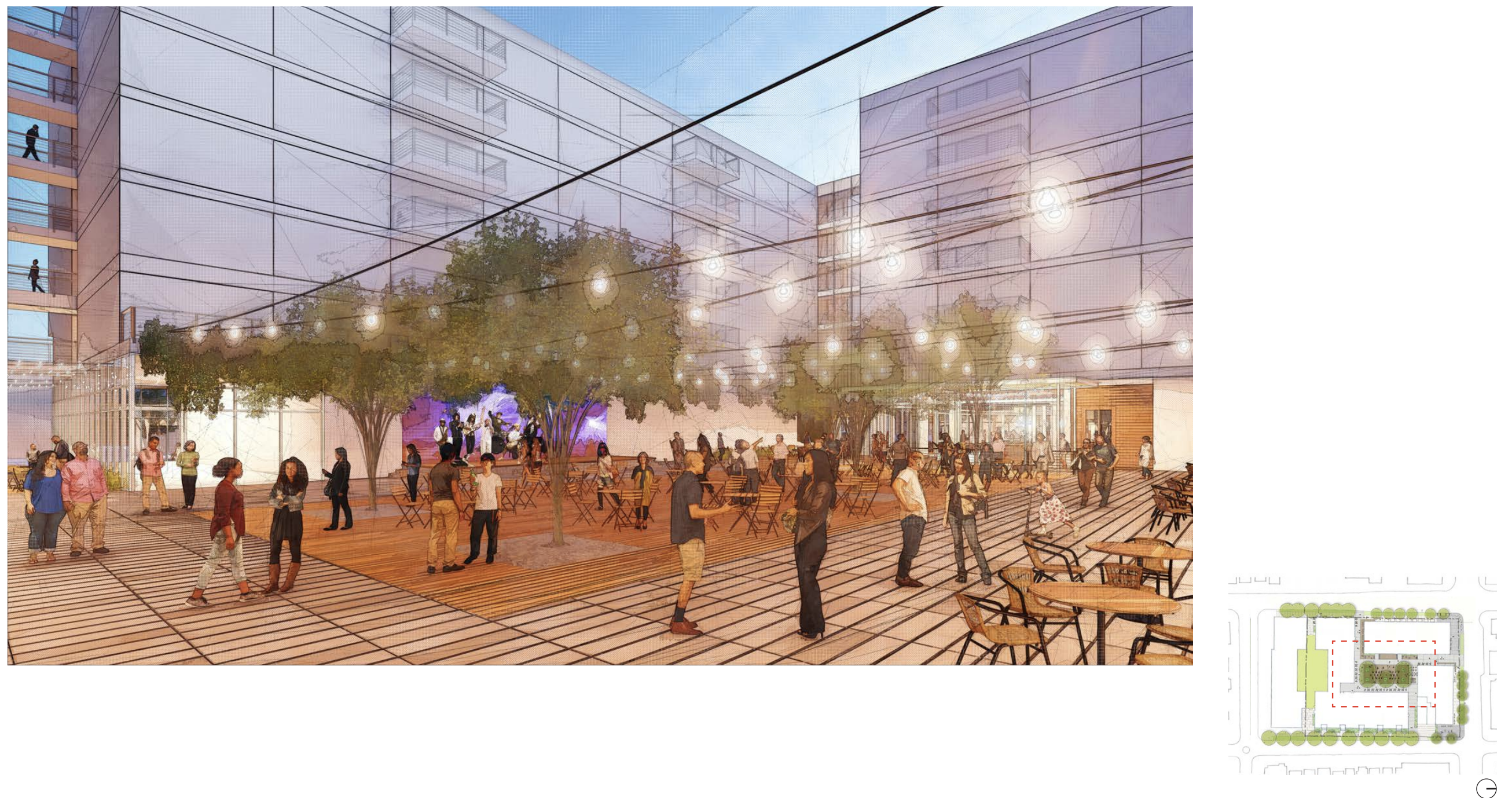 Love it, hate it or feel indifferent, you can share your opinion with the designers and the city. The entire packet can be seen online here. The public hearing will be from 6:30 PM to 8 PM on Wednesday, January 24, 2018 at Seattle University in Room 210 of the Student Center at 1000 E James Way. Comments can be submitted in person at the meeting or by email to the Seattle Department of Construction and Inspection planner, Carly Guillory at carly.guillory@seattle.gov.