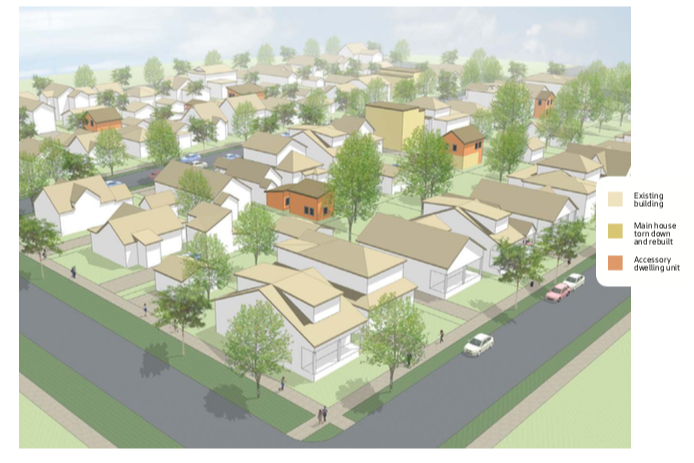 Seattle, a city of 348,000 homes, has built just 579 backyard cottages since 1994, the year the region also enacted an urban growth boundary limiting suburban sprawl at the region’s fringe. A more consequential 1,591 mother-in-law apartments have been built in the city during the same period.

The city, spearheaded by Councilmember Mike O’Brien, is trying to reform backyard cottage regulations (more formally referred to as “accessory dwelling units” or “ADUs”) as a way to expand housing options for families, create affordable housing, and provide residents with a means to generate extra income if units are rented.

On May 10th, the Seattle City Council issued a Draft Environmental Impact Statement (DEIS) analyzing three primary alternatives. One alternative would maintain the status quo while two alternatives considered various strategies to relax regulatory requirements, such as parking and owner occupancy standards, while adding affordable housing contributions. A 45-day comment period is open on the DEIS, after which the Council Central Staff will prepare and issue the Final Environmental Impact Statement (FEIS). Once those milestones are completed, actual reform legislation could be considered and adopted by the city council.

This extended environmental review process was the result of an appeal to the threshold determination by the Office of Planning and Community Development in 2016. Martin Kaplan, an architect and resident of Queen Anne, led the appeal against the city’s Determination of Nonsignificant under the State Environmental Policy Act, which was reviewed by the city hearing examiner. The hearing examiner sided with the appelant requiring additional environmental review on several grounds, including displacement, aesthetics, parking that could be impacted by the proposed land use reform. By more thoroughly evaluating these issues, the Enivormental Impact Statement process could result in different regulatory choices to mitigate impacts, if deemed necessary or desirable.

Earlier this year, the released a summary report of scoping comments received last fall, which suggested what issues should be specifically evaluated through environmental review. The DEIS has responded to those comments by touching on issues in the following five key topic areas:

The DEIS also summarizes several different approaches to reform of backyard cottage regulations. Alternatives 2 and 3 share many of the same elements of reform, such as minimum lot size, lot coverage, and roof features but are also analyzed with slightly divergent regulations for parking and number of ADUs allowed on a lot. 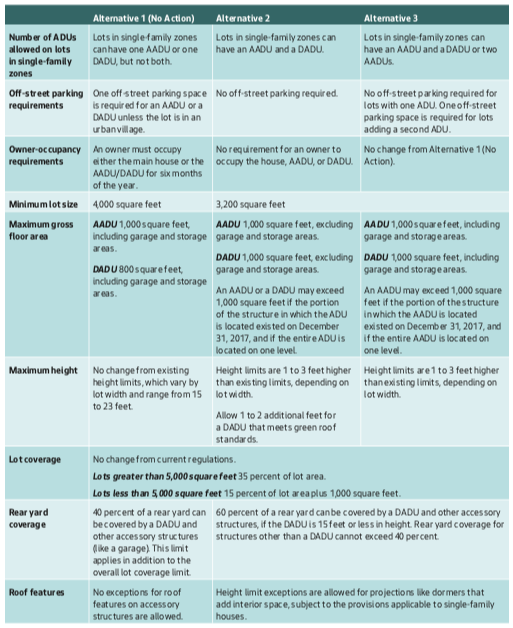 Some of the big differences between the action alternatives include the following:

Many of these proposed changes represent significant lifting of restrictions on ADUs, which could spur further interest by landowners in development of them and adding hundreds of new housing units over the status quo. The differences between the alternatives, however, are fairly consequential. The number of unrelated persons allowed on a lot, off-street parking, and maximum building height standards, for instance, could result in widely different outcomes in ADU interest and construction.

The Environmental Impact Statement process is meant to evaluate the tradeoffs between alternatives. Depending upon public feedback, the alternatives could be further refined picking and choosing features from the DEIS alternatives to develop a consolidated preferred alternative in the FEIS.

An open house and public hearing on the DEIS will happen on Thursday, May 31st. The open house will kick off at 5.30pm and be followed by the public hearing at 6.30pm in the Bertha Knight Landes Room at Seattle City Hall. Council Central Staff is also accepting comments online during the full 45-day comment period.

Regardless of what happens with the backyard cottage regulations, the city is looking to streamline the permitting process for them. The Seattle Department of Construction and Inspections (SDCI), for its part, will develop several pre-approved DADU designs that prospective applicants can use to expedite permit approvals and save money. SDCI will consult with architects to draft the pre-approved building designs to satisfy code requirements. Through the process, SDCI will also work with stakeholders and communities for input on design approaches. Ultimately, this could help get more DADUs built quicker and aid novice homeowners better traverse the complexities of permitting.