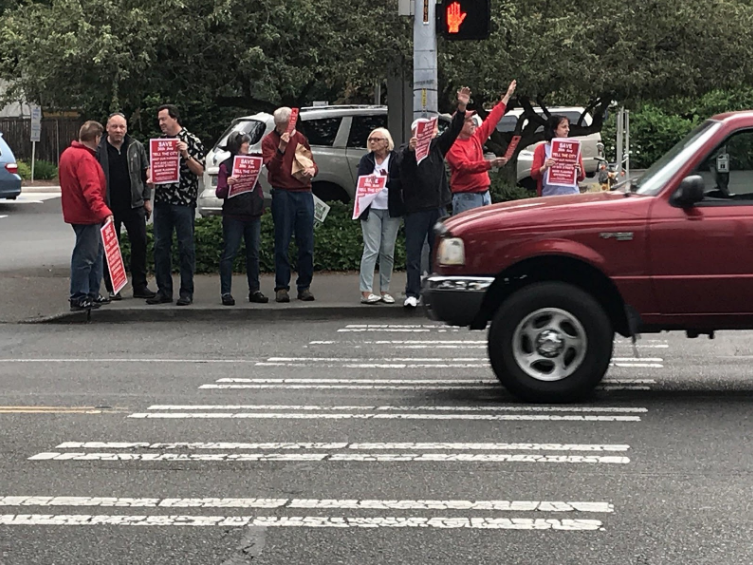 Folks from the group “Save 35th Ave NE” gathered last Monday evening along 35th Avenue NE to protest bike lanes being added to the street. The project, despite being politically contentious, is an example of what Seattle needs to be doing more of–building cost-effective bike lanes as part of repaving projects. With the announcement of the Move Seattle levy “reset,” and the widely publicized cost of the 7th Avenue protected bike lane, cost-effective projects like 35th Avenue NE are our best shot of meeting the levy goals. If anything, this project should be going even further by adding more protected bike lanes and creating better pedestrian crossing improvements. We should be using every single arterial paving project as an opportunity to build out Seattle’s bicycle, pedestrian, and transit network.

Since then, SDOT has replicated that successful model of low-cost bike lanes being part of paving projects. However, many paving projects are moving forward with no bike lanes or safety improvements included in them. Some, like the upcoming University Way NE paving project, included bike lanes on University Way in the initial design, but dropped them due to businesses expressing concerns about lost parking.  Others, like the 25th Avenue NE paving project, didn’t bother considering bike lanes or sidewalk improvements despite plenty of underutilized space, a poor safety record with the current roadway design, and some very clear connectivity wins. SDOT staff have told me that they won’t consider bike lanes on 25th because it’s not in the Bicycle Master Plan.

There’s a similar story to be told for sidewalk improvements. When Greenwood Avenue N was recently repaved, SDOT did not bother to add sidewalks. When the Washington State Department of Transportation approached SDOT about its upcoming repaving of Aurora Avenue, they offered SDOT the opportunity to combine the repaving with the creation of new sidewalks.  The state would handle the repaving, and SDOT could handle the sidewalks. SDOT declined. Meanwhile, if you attempt to get sidewalks added to your street, traffic engineers at SDOT will tell you that it’s not possible due to the high cost of related things like drainage.

The Move Seattle levy increased the bike budget, but several recent bike projects with cost overruns have made it clear that we’ll need additional funding or to lower our current goals.  The 7th Avenue protected bike lane was a project that suffered from overruns, widely publicized as costing $12 million dollar per mile. What’s really happening here is that we’re attempting to add bike lanes onto poorly maintained streets. Some of those streets are clearly in dire need of bike improvements due to safety concerns. However, others are selected through a combination of an opaque, complicated equation in the Bicycle Master Plan, recommendations from Seattle’s Bicycle Advisory Board, and political considerations.

It’s easy for a bike lane project on a poorly maintained street to redo large portions of the street and sidewalks.  When a bike lane (or any other roadway improvement, for that matter) is installed, federal disability laws trigger a requirement that any deficient curb ramps are upgraded. New ramps require a minimal slope approaching them, so often a simple ramp upgrade ends up also replacing tens of feet of nearby sidewalk. Proper drainage is also a requirement, so now we’re ripping up the road to replace pipes. As long as we’re doing that, we might as well add curb bulbs to calm traffic and improve pedestrian crossings. Accessible pedestrian push buttons (aka “beg buttons”) are also required, so now we’re potentially modifying outdated signals, wiring, and poles. Roadway modifications end up being a good time to upgrade or fix water and sewer pipes. In addition, all of those things cost us in terms of engineering time, coordination between agencies, and temporary traffic control (such as detours and well-paid overtime police flaggers) during construction.

While it’s not a bad thing to improve these poorly-maintained streets, we simply can’t afford to with our current budgets. Pairing projects makes much more sense. In a paving project, we’re already ripping up the street. We’re already doing those mandated curb ramp upgrades. We’re already doing the utility work. The City’s paving budget is much larger, and easier to get matching grants for. These are natural fits for creating bike, transit, and walking infrastructure.

In addition to the fiscal reasons for doing this, we also have a Complete Streets ordinance (signed into law by former mayor and city council in 2007) that states that street improvements will ensure that safe facilities for walking and biking are included.  It could be argued that SDOT is violating Seattle’s laws when we repave a road like 25th Avenue NE or NE 50th Street, but don’t bother to install safe bike facilities. That argument is even stronger for instances where we don’t install sidewalks during repaving projects, like the aforementioned Greenwood Avenue N or Aurora Avenue paving projects.

The Save 35th protest group is attempting to convince Mayor Durkan to remove bike lanes from the project and restore parking. Though the Mayor is currently sticking to the planned bike lane design, the protester’s outrage could potentially sway her. I’m hoping that not only does the project go forward as planned, but that we can convince the Mayor and SDOT to add bike lanes to every single arterial paving project.

The interim SDOT Director has said, “I thought the Mayor was going to have a heart attack when I showed her [the cost of the 7th Avenue bike lane project].”  If our critical bike connections and the downtown bike network are going to be more expensive than anticipated, then we can only build out the city-wide network by choosing smart, cost-effective bike lane implementations that piggyback on top of other projects. That means not backing down due to political pressure, as the city has done for University Way NE. Combining these projects with additional pedestrian improvements would also be a great way to save money and win political support, as many of the Save 35th supporters do want to see walking improvements made to 35th Avenue NE.

Pairing bike lanes with paving projects would mean putting bike lanes in places that the Bicycle Master Plan doesn’t currently recommend. The map in the Bicycle Master Plan was created with the realization that we cannot currently fund bike safety on every arterial, and so we’d prioritize certain routes. Sticking to those priority routes doesn’t make sense if it means we can only built out a fraction of the network as a result.

Adding protected bike lanes to every paving project would allow us to hit our goal of 50 miles of protected bike lanes, as specified in the Move Seattle levy. It would also improve safety along a number of corridors that are currently very dangerous arterials, pushing us further towards our Vision Zero goals. If we want to meet these goals, and if we care about the lives of people who walk and bike–we need to be combining projects and using our funds wisely. There’s no excuse not to.