Joshua Karl Reynolds was walking on the shoulder of Birch Bay Lynden road near Blaine, Washington on a Saturday evening last May when he was struck and killed by the passenger-side mirror of a passing truck. The driver of the truck left the scene and turned himself in to police three days later. Joshua’s mother told the Bellingham Herald that he had been walking everywhere he went after being ticketed for driving without a valid license. He was thirty-three years old.

Angela Brumley was crossing Pacific Avenue S in Tacoma last November when she was struck and killed by a Jeep. Pacific Avenue in that area has two marked crosswalks for pedestrians within a half-mile of each other, at 108th St S and at 99th St E. She was crossing the street at 106th on a dark and rainy day. No charges were filed against the driver of the vehicle. She was thirty years old.

Jennifer Young was crossing 12th Avenue in Anacortes last June when she was struck by a commercial semi making a left turn from Commercial Avenue. She was walking across an intersection with a marked crosswalk. The Skagit County medical examiner’s webpage states that “the cause of death is multiple blunt force trauma and the manner is accident.” She was forty-four years old.

Nellie Yelli was walking in a marked crosswalk across Wallingford Avenue N in Seattle just north of Green Lake last January, on New Year’s Day. The woman who struck Yelli with her car left the scene before returning an hour later and later pled guilty to vehicular homicide while driving under the influence. Treza Hafzalla is currently serving an eight-and-a-half year prison sentence. Nellie Yelli was sixty-two years old.

Preliminary numbers recently released by the Washington State Department of Transportation (WSDOT) show in 2017, 109 people walking were killed by traffic on Washington’s streets. This is an increase of 21 people from 2016 and a 118% increase in five years, compared to 2013 when 50 people on foot were killed. Over the same time period, the number of people who were killed on our state’s streets went from 436 to 565, a 29% increase. The number of people on bikes who were killed in traffic has stayed relatively constant, with fewer fatalities in 2017 (13) than in the previous two years. 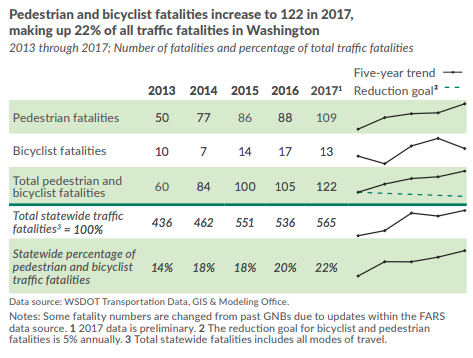 Overall, the portion of people killed on Washington streets who were vulnerable users (people walking or people biking) last year increased to 22%. In 2013, that percentage was 14%. In other words, traffic fatalities are going up, but fatalities for people walking is going up even faster.

Of all the contributing factors that lead to collisions–distraction due to electronics, the influence of drugs or alcohol–the one that contributes most to the ultimate fatality count is speed. “73% of pedestrian and bicyclist fatalities in Washington occurred on roads with posted speed limits of 30 mph or higher,” the report said.

But the streets these collisions are occurring on are not highways where the streets are expressly designed to move people fast. The report also states that “from 2013 to 2017, 62% of fatal and serious injuries involving people walking or bicycling in Washington occurred on city streets, 26% were on state routes and 11% were on county roads. Of those occurring on state routes, 83% were in urban or urbanizing areas. While main street highways (sections of state routes that also serve as main streets for the local populations) represent about 10% of total lane miles on the state system, 44% of all pedestrian and bicyclist fatalities that occurred on the state system were on these roadways.”

In other words, if we lowered the speeds of vehicles moving through Washington state’s cities, we would save lives. This is undoubtedly true in Washington’s largest city of Seattle where road diets that reduce vehicle speeds have been shown to reduce the severity of collisions: 35th Ave SW, Rainier Avenue, and NE 75th St.

Washington State’s Target Zero program has a goal of completely ending serious and fatal traffic collisions by 2030, the same goal that Seattle has. Because meeting that goal will require coordination among all of the state’s cities, counties, and the state transportation department, it will take even more resources and time to achieve. These recent numbers suggest that without a significant investment and change in approach, that target is not only unachievable but also so unrealistic as to essentially become a lie. The question is: when will the state’s investment in ending traffic fatalities really begin?