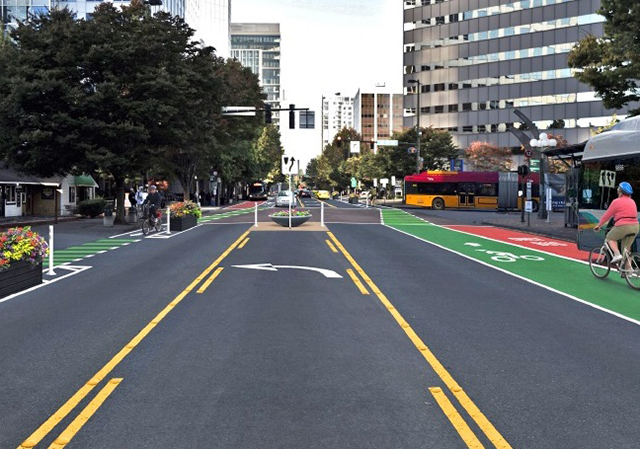 Separated bike lanes are coming to Downtown Bellevue. It’s the first big foray into all-ages and abilities bike infrastructure for Bellevue’s city center. Over the next several weeks, crews will install new bike lanes on 12 blocks of 108th Ave NE stretching from Main St to 12th St NE. Billed as a bikeway demonstration project, the city will use several different bike lane techniques and treatments. The project will help people on bike move through the city center and link them to the I-90 Trail, SR-520 Trail, other local bike facilities, and the Bellevue Transit Center.

Most of the bike lanes will be separated from general traffic, some with physical protection. Separation will come in three flavors: painted buffer lanes, temporary flexible diverter posts with curbing, and planter boxes. Crews will also use green paint markings on the street, similar to Seattle, to provide better visibility and raise the profile of bike lanes. These will generally be applied at locations where motorized vehicles and bikes are expected to converge, such as driveways and intersections.

At intersections where bike lanes need to be narrower to accommodate other street uses, Bellevue crews will use regular unbuffered bike lanes. This will be the case at NE 4th St, NE 6th St, and NE 10th St. Two small stretches near Main Street will also get the sharrow treatment since median islands and small street width make it too challeging to add fully separated bike lanes or even marked bike lanes.

Bellevue plans to collect data on how the bike lanes perform, which could result in further adjustments down the road. The city center bike demonstration should be fully open in July with a celebration planned for midday on July 31st. The demonstration project is funded from a city transportation levy and should clock in just under $366,000.

Bellevue is also in the process of building out a wider bicycle network, which the city is calling a “bicycle rapid implementation program” for some 52 separate projects. These are generally meant to be low-cost solutions for safe bicycle facilities. Some of these are being implemented near the demonstration bikeway. Facilities thate are either under construction or will be installed shortly after the ones for the demonstration project include:

Pedestrians in the city center will also see improvements come online this summer. Crews will install a raised crosswalk at the intersection of NE 6th St and 106th Ave NE, which forms the well-known east-west pedestrian corridor between the transit center and Bellevue Square. That project will come in with a larger price tag than the demonstration bikeway at $736,000.