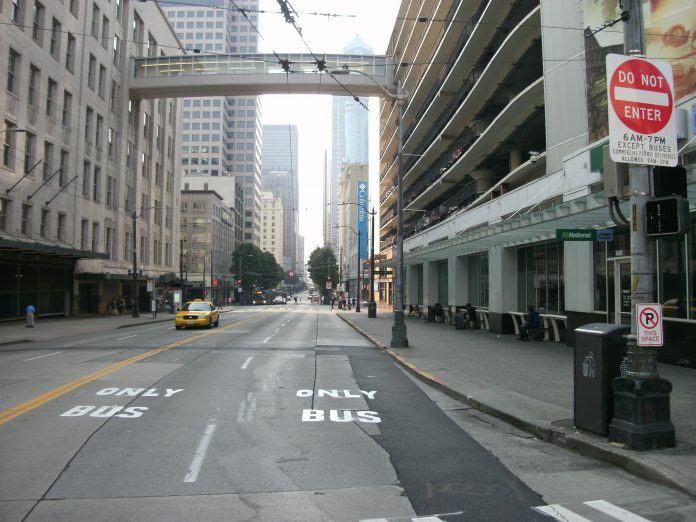 Over the weekend, Seattle Department of Transportation (SDOT) crews were busy marking twelve blocks of 3rd Avenue “bus only” and adding signs up and down the corridor alerting drivers not to enter between the hours of 6am and 7pm any day of the week. These changes were originally planned for next month, but the department announced they were moving up the completion date to take advantage of dry weather.

If adequately enforced, this will be a huge time saver for transit users in Seattle’s center city. Previously vehicles were allowed to drive on 3rd Avenue all day on the weekends, and throughout the weekday from 9am to 3pm and after 6:30pm. During peak times, drivers could still access 3rd Avenue for a block but technically had to make a right turn and exit the street at the next intersection. These turns were detrimental to transit mobility–right turns, as drivers wait for the busy intersections to clear of pedestrians, back up buses behind them more than drivers going straight down the entire corridor would.

Keeping buses moving on 3rd Avenue within the next several years in particular is critical for a number of reasons. Delays caused by private automobiles using 3rd Avenue as well as increased dwell times associated with one-door boarding mean that currently the street is close to capacity for the number of bus routes that are able to use the route during peak hours.

In March of next year, every single bus that uses the Downtown Seattle Transit Tunnel (DSTT) to get through downtown will instead need to find a surface street. While 2nd Avenue and 4th Avenue have transit-only lanes as well, those streets are also limited in the number of routes that can be added. Nonetheless, without extra capacity on 3rd Avenue, that’s where they will likely end up, vying for space in lanes that also double as turn lanes for private vehicles.

By the time the DSTT closes to buses next year, SDOT will also have ORCA readers installed on every bus stop from Denny Way south to Yesler, allowing boarding at multiple doors. According to documents presented to the One Center City advisory group last year, this could speed up boarding by up to 20 seconds per bus, allowing an additional 20 buses both north and southbound to use the street during every weekday peak period.

In the past five years, there have been 217 collisions recorded by the Seattle Department of Transportation in the stretch of 3rd Avenue that will be impacted by these changes, or one every eight days. Essentially one collision per week that had the potential to delay transit while also presenting a life-threatening situation for those involved. One collision per eight days is extremely high for a street that is ostensibly reserved for transit–removing vehicles even more should have a big impact on how many collisions happen there.

Among those 217 collisions, there were 45 pedestrians involved. On the new transit-restricted 3rd Avenue, no left turns are allowed during any time of day on any day of the week. Left hook collisions make up a high proportion of pedestrian-involved collisions, and the number of pedestrians on this bus-oriented street is very high. While One Center City stakeholders, after professing safety as a high consideration, mainly left out projects that would have a big impact on safety, 3rd Avenue could be a place where a reduction in people getting hurt by traffic violence is a byproduct of a move to a more efficient transit street.