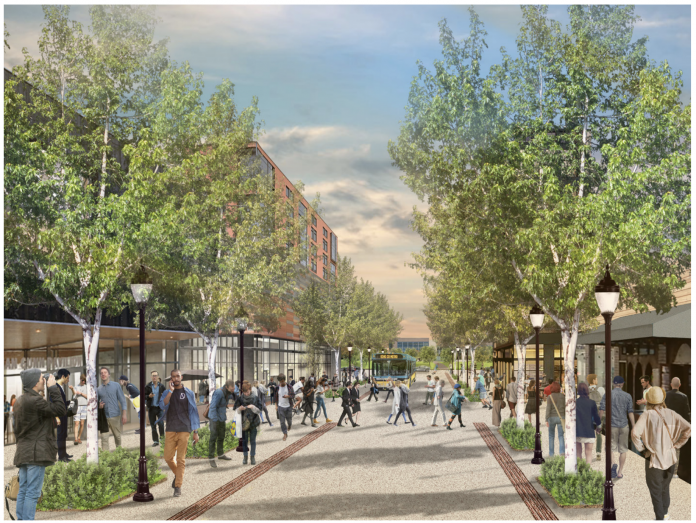 Earlier this month, the U District Mobility Group released a station area mobility plan detailing short-, mid-, and long-term strategies to change how people navigate the neighborhood core as it grows. The long-term strategy identifies several ambitious changes, such as pedestranizing University Way NE (“The Ave”) and NE 43rd St, operating buses on Brooklyn Ave NE, and deploying targeted bike and pedestrian improvements to nearby streets.

The mobility plan would be rolled out in three phases. Phase 1 would occur prior to the opening of U District Station in 2021 while Phase 2 would be implemented over an eight-year period from 2021 through 2028. Finally, Phase 3 would take place after 2028.

The mobility plan was a collaborative effort from community and public agencies with the Seattle Department of Neighborhoods offering a matching grant to the U District Advocates to commission a study. The Seattle Department of Transportation, King County Metro, and Sound Transit were critically involved in the planning process in addition to a host of local stakeholders like the University of Washington, Seattle Children’s Hospital, U District Partnership, and Seattle Neighborhood Greenways.

In 2019, King County Metro will begin a planning process to determine how buses should serve the U District Station. This could wind up sending some buses on to NE 43rd St and Brooklyn Ave NE to more directly serve the future light rail station for easy transfers. The community, however, would eventually like to see buses use more streamlined pathways by taking buses off of University Way NE and not using NE 43rd St, which is envisioned as a grand connection for pedestrians foremost. Instead, the vision outlines moving buses exclusively to Brooklyn Ave NE or 15th Ave NE.

As an early action, the plan recommends that NE 43rd St be designed and built in a manner that will meet the future demands of pedestrians using the street. NE 43rd St will become a critical linkage between the light rail station and University of Washington campus just east of 15th Ave NE for people on foot and bike. A past planning effort resulted in street design guidelines that could partially implement this vision, or at least serve the basis for refinement of streetscape improvements.

Another objective is to improve pedestrian mobility across NE 45th St near the station. This would include upgrades to the sidewalk environment, particularly at the intersection with Brooklyn Ave NE and adjusting signal timing so that pedestrians can easily move north and south the main east-west arterial.

For people biking, early recommended actions envision several bicycle facilities near the station area. At a minimum, SDOT will construct a new protected bike lane on 11th Ave NE in the northbound direction as part of the Roosevelt RapidRide project. This will complete a protected bike lane couplet on the corridor, which is shared with Roosevelt Way NE for southbound connectivity. A new east-west bike lane west of Brooklyn Ave NE is envisioned and the plan also suggests installing additional bike facilities on east-west streets where possible.

Other early action objectives include: development of parking management strategy for on-street and off-street parking, investments in public realm maintenance, deploying a pilot wayfinding effort the district, and strategic collaboration for the design of certain redevelopment sites near the station.

During the mid-term phase, the U District Mobility Group envisions a host of improvements, such as:

In the final phase, the U District Mobility Group proposes to transition of University Way NE from automobile traffic to a pedestrian-only mall. The pedestrianization of the street would apply to a three-block stretch between NE 45th St and NE 42nd St with buses moving to adjacent streets. As part of this, NE 43rd St would ideally be converted to a pedestrian-only street. Comprehensive streetscape improvements would be made to University Way NE as well, such as widened sidewalks, outdoor seating, landscaped areas, and other pedestrian-oriented features.