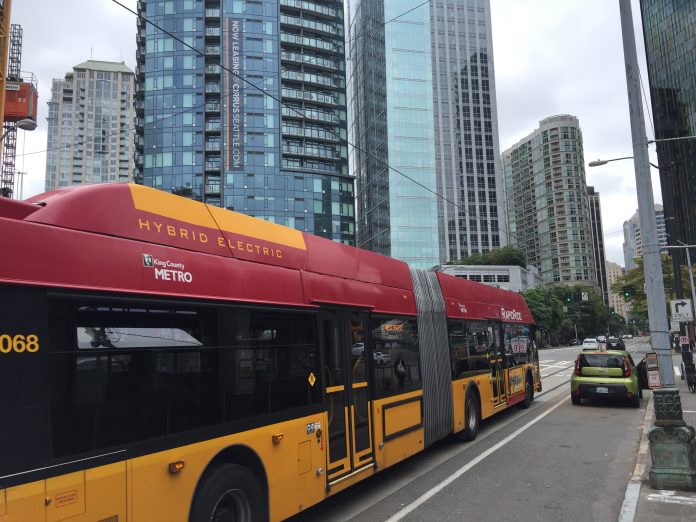 King County Metro has begun planning for a RapidRide corridor in Southeast King County, known as the RapidRide I Line. The corridor is identified as Route 1033 in the Metro Connects long-range plan, running from Renton to Auburn via Kent. The corridor would blend together Routes 169 and 180, which together boast over 8,000 daily riders. Metro says that the corridor has a slightly smaller daily ridership of 6,000 daily riders since Route 180 diverges north of central Kent as it runs northwest to SeaTac.

According to the project information, the RapidRide I Line “will come more often and be more reliable (on-time) than the current routes.” This presumably means that the line will get the full RapidRide brand bump to 10-minute or better service during peak weekday hours and 15-minute or better service during daytime hours. Service will also be extended deeper into the night and expanded on weekends.

Buses will be branded and designed in the traditional RapidRide fashion with high quality stations along the corridor. That should be a vast improvement to stops that are generally bleak and unsafe. Metro has also indicated that sidewalks and pedestrian crossing may be improved to enhance access to transit.

Improving speed and reliability may be a challenge in Southeast King County however. Traditionally, pull-in stops have been created instead of in-lane bus stops. This creates an unsafe weaving for bus operators and often means delay to buses when trying to re-enter traffic lanes. Getting cities to allow in-lane bus stops may be a big lift. Same for installing transit signal priority, queue jumps, and bus lanes. But maybe local traffic engineers and policymakers will surprise us.

The corridor passes through some pockets of higher density areas, like Downtown Kent, East Hill, and Renton. The RapidRide I Line will provide direction service to Kent Station and Auburn Station, both of which have commuter rail and other local bus connections. Route 150, which is a workhorse through the Green River Valley, provides connections to the industrial areas and business parks north of Kent and Tukwila where shopping and services are prevalent. That route terminates at Kent Station, too. In all likelihood, the RapidRide I Line will go at least as far as South Renton Park-and-Ride, which is slated for upgrades as part of the I-405 bus rapid transit project opening in 2024, but it could go further north to Renton Transit Center. Regardless, there will be connections to other routes and service to the urban core of Renton.

The RapidRide I Line planning effort is taking a wider look at a mobility plan that is looking at how to be serve areas throughout the West Valley and East Hill. That means considering how other local routes and dial-a-ride service will integrate with the RapidRide line. Other transportation programs typical of the Community Connection Program could also be incorporated into the mobility plan. Elements of this mobility plan are intended to be implemented in September 2020. Feedback from the public could also help inform similar mobility planning work for the Auburn and Renton areas.

Metro is targeting 2023 for launch of the new RapidRide I Line corridor. The transit agency will need to receive approvals from Kent, Auburn, Renton, and the Washington State Department of Transportation for improvements to right-of-way to provide transit priority. An online survey on the RapidRide I Line and local mobility issues is open through March 29th. Mobility concepts are due out early this summer and formal corridor proposal late summer. A final recommendation on the corridor will come in the winter and could be adopted by the King County Council in the fall of 2020.