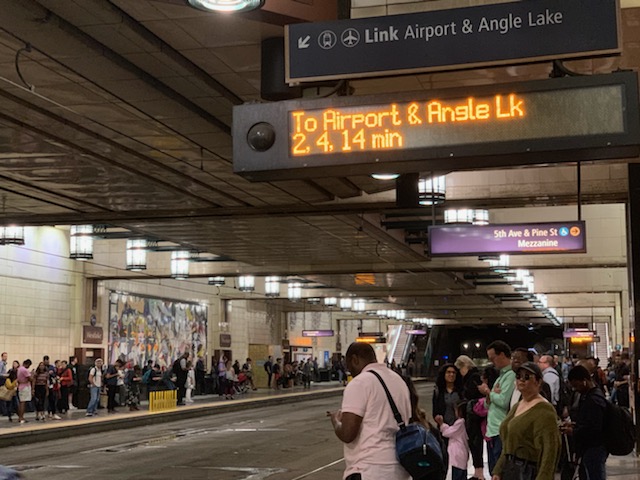 Link light rail passengers just got a big improvement. On Tuesday, Sound Transit launched new real-time arrival information at light rail stations to provide more accurate arrival times. Digital LED message signs south of Capitol Hill Station have long been a feature at station platforms, but the information appearing on them has been less than useful with notification that a train will arrive in two minutes at best. Sound Transit has implemented the same estimated real-time information as has been available at University of Washington Station and Capitol Hill Station.

Counting down to next trips

The LED signs now display the time to the next three trips. They also are now capable of showing service incidents at individual stations or groupings of stations, according to Sound Transit.

The predictive arrival information has been a frequent and long-standing request by passengers since light rail opened. John Gallagher, a spokesperson for Sound Transit, says that technology upgrades were needed to the station systems that power the older LED signs.

“Messages to display [estimate time arrival] on signs are driven from a computer at each station called an SCU (Station Control Unit). The U-Link project only had scope to affect SCU software at Capitol Hill Station and the University of Washington Station,” Gallagher said. “We had to do a separate procurement to be able to modify the rest of the SCUs to have the same capabilities as [Capitol Hill Station] and [University of Washington Station].”

The data feeding SCUs and LED signs comes from the current Public Address and Customer Information Sign system, which is tied into the OneBusAway and General Transit Feed Specification platforms. These platforms procure light rail vehicle locations frequently. Each time a train crosses a track circuit boundary, location data is transmitted back to Sound Transit and spread to the platforms, providing the real-time arrival information passengers see.

New technology a few years away

Last year, Sound Transit initiated a $30.8 million contract with ARINC to deliver a new systemwide digital signs and passenger information management system (PIMS). Full deployment of the system is anticipated in 2023 and would involve replacement of all digital signs light rail and Sounder commuter rail stations. However, existing Link stations should have substantial installation of the digital signs completed by April 2022.

The contract specifies several important capabilities that new digital signs must be able to achieve. Firstly, they will need to display color since light rail lines will eventually be identified by color (three future lines have all been designated as red, blue, and green) and more than one line may stop at station platforms. Secondly, the digital signs will need to display time of next trip, destination of trains, maximum passenger load, and number of train cars. The signs also need to allow special information to be displayed (e.g., service disruptions) and presumably will allow information rotation.

The PIMS itself will involve deployment of an entirely new data platform, which would push information to digital signs and external public transit data feeds (e.g., Google Transit, Transit App, and OneBusAway). The new platform should ultimately result in even more accurate predictive arrival information.

Featured image and video are courtesy of Paige Malott.