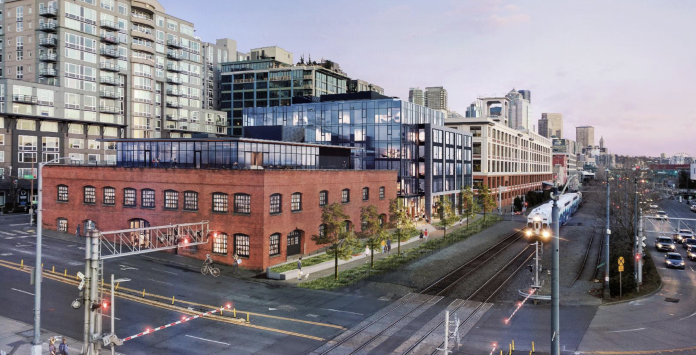 On Monday, the Seattle City Council accepted $6,632.52 in grant funding to plan right-of-way beautification and safety improvements as part of the RapidRide H Line project. The improvements would be targeted for four stretches of the corridor in the Delridge area. Last week, the city council also formally landmarked the Old Spaghetti Factory building.

The Delridge Neighborhood Development Association provided the grant funding to the city with a desire for median plantings and curb bulbs to be designed and constructed at key locations along Delridge Way SW. The association is targeting retail districts in Andover, Youngstown, Brandon, and Orchard as a means to enhance community identity. These districts fall along a two-mile corridor of Delridge Way SW, approximately from SW Andover St to SW Orchard St.

The medians will largely occupy space currently used for center lane turn pockets. The Seattle Department of Transportation (SDOT) would install a variety of plantings within the median to provide groundcover and trees. Installation of the landscaping features will offer a variety of benefits besides character identity of the community.

Planting medians of the kind envisioned generally reduce stormwater and localized heat island effects while cleaning water and air. They also help reduce speeds and collisions, which ultimately improve the comfort of the pedestrian and the public realm–a win-win for residents, bus riders, and local businesses.

SDOT is also asked to install several curb improvements for pedestrians and bus riders. These will largely be focused near key intersection locations, which should also reduce speed and collisions.

The conceptual median and curb bulb locations are proposed as follows:

Construction of the RapidRide H Line is expected to begin next year and service launch following in late 2021.

Last week, the city council formally completed the landmarking process for the Ainsworth & Dunn Warehouse (2815 Elliott Avenue). The building is known for previously housing the Old Spaghetti Factory. Architecturally, the building is constructed of red brick in a traditional Seattle warehousing style with high roofs.

The Ainsworth and Dunn Warehouse was originally constructed in 1902 and designed by Stephen Alston Jennings, a Chicago-born architect who moved to Seattle. Preservation controls will extend to the building exterior and west side of the site in addition to the interior heavy timber structural system. The latter control is fairly unique for landmarks, but is relevant given their importance to the structure.

The site is being redeveloped, which involves preservation of the building. The developer is constructing a new six-story structure east of the landmark building containing 62 dwelling units and nearly 7,000 square feet of commercial space. The project also involves reuse of the landmark building by constructing a third-story addition and converting the space from restaurant to office (approximately 32,400 square feet). The redevelopment will reduce the number of parking spaces on the site to a mere 60, all of which will be located below ground.