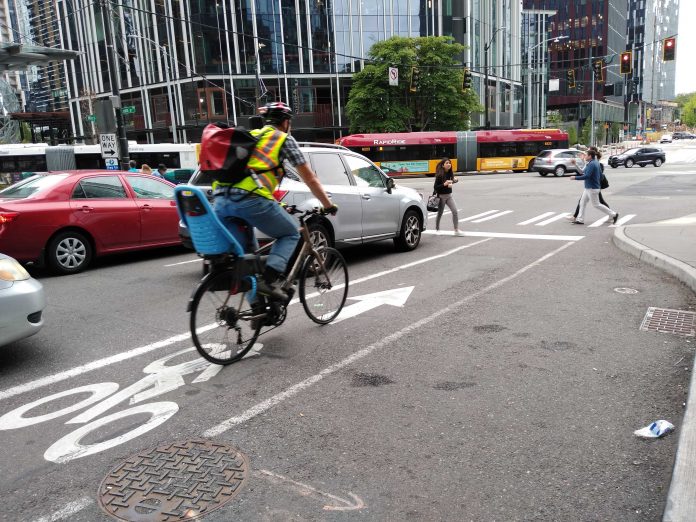 While the plan for expanding Seattle’s bicycle network remains headed for a near-complete halt on new facilities in just a few years, the Seattle Department of Transportation (SDOT) is set to make up a bit of lost ground with a flurry of new protected bicycle lanes downtown in the next few months.

For that we can give a bit of credit to the city council, who passed a unanimous resolution last year laying out expected timelines for completing a fully connected network downtown. But the department will not meet all of the expectations in the resolution, with some key segments delayed or watered down. Overall getting these projects on the ground is a huge step forward, adding significant mileage and aiding the ability to safely get around downtown by bike–likely paying safety dividends for all road users. This will take the form of four major projects that should be in use by the end of the year.

9th Avenue North is the most direct connection between downtown and the Westlake bike trail, but a protected bike lane on the entire street has been delayed by adjacent construction for years.

Currently there are short protected bike lanes on opposite sides of the street from Mercer Street to Harrison Street. Those would be extended two additional blocks south to John Street. South of that intersection SDOT plans to install a two-way cycletrack on the west side of the street, directly adjacent to Denny Park, where it would continue through Denny Way for one short block on Bell Street. Amazon’s new building at 8th Avenue and Bell Street will be installing another block of the two-way cycletrack later this year to connect to 7th Avenue.

People on bikes would transition between the two-way cycletrack and the one-way facilities at a new all-way stop sign at 9th Ave N and John St, where green bicycle markings will indicate to drivers that people on bikes will be transitioning by riding diagonally across the intersection. While this may create some confusion, it definitely seems preferable to creating the same transition at Denny Way.

The rest of the Bell Street two-way bike lane project should be completed next year, though what exactly that means for people on bikes between 2nd Avenue and 5th Avenue is still not exactly clear.

The 7th Avenue bike lane continues to get segments added to it for riders headed southbound, but except for a few blocks where Amazon was required to build bike lanes on both sides of 7th Avenue (five years ago out of coordination with the current plan), there is no northbound counterpart. 8th Avenue would be that complimentary facility, theoretically connecting Pike Street to that above mentioned bike lane on Bell Street.

Currently, 8th Avenue between Pike and Pine is a two-way street. It would be converted to a one-way, with a protected bike lane on the left (south) side of the street all the way to Virginia Street. There would be another street-side transition, with all users going from the left to the right (north) side of 8th Avenue. This is to prepare riders for the transition onto a two-way street again north of Westlake Avenue, which is where the bad news comes in: north of Westlake, the facility is currently planned as a paint-only bike lane in the door zone of a pick-up and drop-off area. The protection comes back only for a short half block before Bell Street.

This leaves a key segment of the center city bike network unsafe, impacting the entire network’s usability. This absolutely doesn’t meet the definition laid out in the city council resolution for “an ‘all ages and abilities’ bicycle connection to serve all ages, languages, ethnicities, gender, race and abilities” and there isn’t any plan to remedy.

Another protected block on Pine Street will be completed to connect 7th Avenue to 8th Avenue as part of construction on 8th Avenue—though with that block being home to the Hyatt’s dropoff area, it remains to be seen how robust that protection will be.

A safe bicycle connection between downtown and Capitol Hill has always been just out of reach for Seattle’s transportation planners and advocates. Seattle will take a huge step toward that with the installation of protected bike lanes on either side of E Pike St all the way from Broadway to 9th Avenue, but it will fall just short of providing the key connections that would actually provide safe cycling space for all users.

SDOT says it will not be able to install bicycle facilities on Pike Street between 6th Avenue (where the current one-way protected bike lane ends) and 9th Avenue until next year. The transition between one-way street downtown and two-way street on Capitol Hill will be the most important part, and at this point we don’t have a good idea what that looks like. So right now we can only think of this as a wholly separate facility from any of the other downtown projects.

The selection of Pike Street as the location for both directions of safe bike travel on Capitol Hill is a huge step forward. The amount of parking that will have to make room for these facilities is not insignificant. There are no plans to remove the paint-only bike lanes on Pine Street that currently see a high amount of use, but it’s likely a lot of users will switch to Pike Street when a protected facility on a street that offers little conflict with King County Metro buses opens there.

The best piece of news for the Center City bike network was announced last month when the latest version of the implementation schedule came out: 2nd Avenue will finally get extended this year to the other side of the daunting transit hub around 4th Ave S and S Jackson St, and not via the original hilly route proposed last year that utilized 6th Ave S.

5th Ave S is the route that makes the most sense, as laid out in the Bicycle Master Plan, paired with S Main St. A one-block extension of 2nd Avenue south will complete the route, with a bus stop on 5th Ave S moving a bit further south to accommodate the new lane. S King St will be the planned destination to connect people on bikes to the new S Dearborn St protected bike lanes that run all the way to Rainier Avenue.

King Street, which is planned to be converted into a Neighborhood Greenway, will be the weakest link in this route. The street has all-way stops at every intersection, but traffic diversion will not be added in Chinatown-International District. SDOT’s Dan Anderson told the bicycle advisory board last week that speed humps were not supported by the community and so the only improvements on King Street will be that the road surface will get repaved and signage added. It’s not clear how this qualifies as a “greenway” on a busy downtown street. Crossing improvements will be made up the hill, but the connection between 5th Ave S and S Dearborn St is envisioned as S King St and Maynard Ave S.

That being said, a protected bike lane ending in Chinatown-International District is very different from one ending on 2nd Ave in Pioneer Square. Making space for people on bikes along 5th Ave S will be a huge change in modal priority in that area.

Hey, What About 4th Avenue?

If SDOT can complete these segments by the end of the year, it won’t have checked every box on the city council’s wishlist, but it will have completed the lion’s share of them. That would add the largest number of miles to the city’s bicycle network since the Mayor Jenny Durkan took office in late 2017.

Last month, however, SDOT told the city council’s Transportation and Sustainability Committee that the 4th Avenue two-way protected bike lane, which the department had previously said was at 100% design, would have to be downgraded to a one-way protected bike lane. Director Sam Zimbabwe told the committee that the “traffic impacts” and the costs of the two-way facility had not been fully evaluated.

This ignores the two-year One Center City process that evaluated options for moving people through central downtown and included stakeholders from every Seattle transit agency as well as an expansive group of downtown stakeholders. The outcome was the 5th Avenue and 6th Avenue transit lanes, that were installed earlier this year, and the 4th Avenue protected bike lane. If SDOT is backsliding because of lost parking, at least the department could admit that. But the bike lane is designed and installing a one-way facility first would be a waste of money.

The plans for actually getting projects on the ground by the end of 2019 are highly encouraging. Cities around the world have shown that bicycle usage increases exponentially when a network is completed, and Seattle is still waiting for that to happen, even though record numbers of people are riding. Seven of the 10 highest usage days ever for bikes using the Fremont Bridge were in 2019 so far. Imagine what will happen when SDOT completes the routes envisioned by the city council’s leadership.