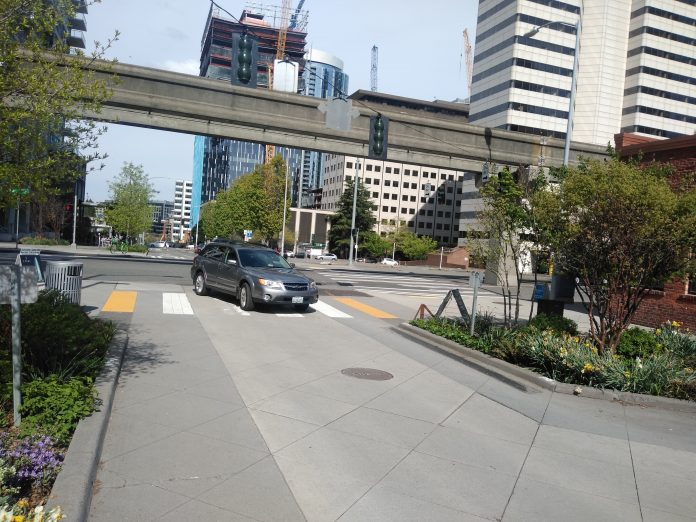 As the Seattle Department of Transportation finishes its listening tour on the fully scaled-back Bicycle Master Plan schedule this week, the design of projects slated for completion in the next few years are starting to take shape. Here’s where the nuts-and-bolts decisions that impact the users of the transportation network every day are made. Earlier this month the “conceptual” design for E Union Street was released, and it clearly fell short of expectations for routes to be constructed with the limited funding we have. Bell Street is another segment that has a lot of potential to become a key segment of the safe bike network, but there are significant design challenges to overcome first.

Bell Street Park, which opened in 2014, turned a five-block segment of a normal street through Belltown into a unique-for-Seattle calmed one-lane road with bioswales, greenery, and curbs flanking the travel lane. The attempt to provide Belltown with some open space, which the neighborhood sorely lacks, has received mixed reviews since it opened.

While traffic on the street between 5th Ave and 1st Ave is supposed to be kept to a minimum by only permitting drivers to travel one block on the calmed segments before making a turn, this is not at all well-enforced. In addition, King County Metro buses can and do use most of the corridor at frequent intervals, making standing near the roadway pretty unpleasant.

The street is well-used by people riding bikes as a connection between bike lanes on Dexter Ave N and 9th Ave N and the 2nd Ave protected bike lane, but the lack of traffic calming inhibits it from becoming a route that all users might feel comfortable using. But SDOT’s plans for the street once it’s no longer needed as a bus corridor may fall short of allowing the street to achieve its full potential as a place for people biking, walking, and rolling.

The proposed design for Bell Street would leave the current Bell Street design unchanged, with “no bicycle facility markings…in the park”, according to the project website. People on bikes would be able to ride in both directions on that segment because of increased traffic diversion enforcement at 5th Avenue that will not permit any vehicles apart from emergency ones to enter Bell Street there. “Additional traffic calming measures” will also be implemented in Bell Street park but it’s not clear how stringent they will be. A narrow Bell Street with any amount of vehicle traffic is not a street most cyclists would like to ride against traffic flow.

The removal of vehicle traffic from Bell Street would also turn the street into a pedestrian corridor the likes of which Seattle has never seen before. But signage alone will not be able to create this reality.

Between 5th Ave and Denny Way, a two-way cycletrack would be installed on the north side of the street, along with a continuation of the current green street treatment in place on the rest of Bell Street. The designs for this cycletrack can be seen in the plans for Amazon’s newest building under construction on Block 21, between 7th Ave and 8th Ave.

A two-way cycletrack combined with no change in the existing Bell Street park means that the transition will be relatively easy for riders heading west toward 2nd Avenue from Denny as they exit the cycletrack at 5th (assuming the traffic diversion is actually comprehensive) but anyone heading the other direction (again, with no bike markings in Bell Street park to make this clear) will have to switch from the right side of Bell Street further to the left to be able to enter the cycletrack and avoid vehicles making the required left turn from Bell onto 5th Ave.

Another challenge created by the two-way bike lane is the connection at Denny. 9th Ave N will eventually have protected bike lanes on both sides of the street stopping at Denny Way. Riders coming north from Bell Street will again have to switch sides: the only way this will work is with a diagonal bike crossing and fully separated phases for the signal crossing Denny. But this will create a confusing piece of infrastructure that will likely mean some people on bikes using the street take the lane instead.

SDOT’s project page for Bell Street states “bicyclists will have an all ages and abilities network that will connect the 9th Ave N protected bicycle lane to the 2nd Ave protected bike lane.” To be clear, this is only true for this proposed if no vehicle traffic is allowed at all on the existing Bell Street park segment and the design is changed to enforce this fact. Signage alone will not make riding a bike the “wrong” direction on Bell Street an all-ages-and-abilities choice. Failing this, the installation of a two-way cycletrack would provide a connection between 9th Ave N and 7th/8th Avenues, which is needed, but would leave another easy network segment abandoned. The Bell Street Park design must work for all users.

The implementation schedule for the Bicycle Master Plan has the Bell Street project slotted to be completed in 2019 but with associated known risks around coordinating with King County Metro and adjacent development, but we now know the full project will definitely not be completed until later. Metro buses will likely not move off Bell Street until the reconnection of cross-streets on the former Aurora Ave N as part of the 99 tunnel project next year. An interim two-way PBL is scheduled to be completed by Amazon between 7th Ave and Denny Way late this year, made permanent with the rest of the project next year, but there are a lot of moving parts to this project, so timelines should be taken with a large grain of salt.

With the amount of funds left in the Move Seattle levy for bike projects dwindling and an apparent lack of any desire at City Hall to find more funding, ensuring that the design for projects like this is well-executed is hugely important.