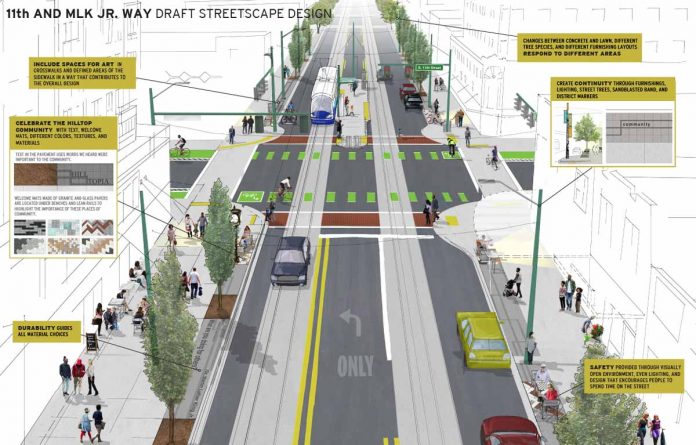 Sound Transit plans to spend about $10 million on transit access projects per subarea. A total of five subareas existing within the Sound Transit service area, which means that there is about $50 million available for projects. The transit agency says that it received 53 applications across 33 local jurisdictions, which cumulatively total $86 million in project costs–$36 million more than is allotted to the program. Sound Transit had already provided preliminary recommendations on the proposals. However, additional feedback on the proposals via an online open house is open through end of today August 23rd.

Funding for the program comes from the Station Access Fund, which was approved by voters in 2016 as part of Sound Transit 3. The program has a total of $100 million in funding available for improved, half of which is being allocated through this current effort.

In Snohomish County, local jurisdictions have proposed 11 different projects. These projects range from $500,000 to $3.45 million a piece, which collectively total approximately $20.1 million.

Edmonds has the priciest project amongst the bunch billed as a bike and pedestrian project focused on 228th St SW. The goal of the project would be to improve connections to the Mountlake Terrace Transit Center, which will become a light rail station in 2024 as part of the Lynnwood Link light rail extension. The year of completion of the project would be in 2025 and involve “add[ing] a two-way left turn lane, sidewalk, and bike lanes on both sides of 228th Street SW between 78th Avenue W and 95th Place W,” according to Sound Transit.

Meanwhile, Snohomish County has proposed $4.5 million in two projects for Ash Way Park-and-Ride. That transit center will likely become a light rail station in 2036. One of the projects would involve a direct access ramp and I-5 crossing, which would improve bus access to I-5 north of the center. This would be particularly valuable to Route 512 and 532. The Swift Orange Line and other local routes could benefit from an I-5 crossing to avoid circling back on Ash Way to and from 164th St SW. $2.5 million would be used to fund 30% of the project, which would be completed by 2036.

Separately, Snohomish County proposed a three-phase set of bike and pedestrian improvements on Ash Way. The improvement would generally run north from the park-and-ride facility to Admiralty Way in the Mariner neighborhood. According to Sound Transit, “[t]he improvements will include roundabouts, bike lanes, connected sidewalks compliant with Americans with Disabilities Act standards, and planter strips.” Meanwhile, Everett has much more humble ambitions with pedestrian and bike access improvements stretching along a sole corridor from Everett Station to Angel of the Winds Arena. That would still cost about $1.9 million to accomplish and be delivered by 2024.

King County Metro is seeking the cheapest project to deliver secured bike storage at up to two transit stations by 2022. “The project will expand the supply of secure electronic bike parking, short-term bike parking, and on-site wayfinding, and improve bike and pedestrian on-site circulation,” according to Sound Transit. “It will also add bike and pedestrian counters to help evaluate modes of arrival at transit.” The locations planned for investment include Bothell Way NE at NE 145th St and SR-522 at Ballinger Way NE, which will be future bus rapid transit stops.

Seattle submitted two projects, one of would improve future access to the Judkins Park light rail station opening in 2024 as part of the East Link extension. A total of $4.36 million is being sought for the project, which “contains a comprehensive pedestrian and biking access package that includes arterial crossings, pedestrian stairways and sidewalks (including curb ramps), pedestrian lighting, and neighborhood greenways (including accessible pedestrian signals),” Sound Transit said. The target completion year is 2021 for the project.

Another bus rapid transit-related project along SR-522 is proposed by Lake Forest Park. The city is seeking $2 million to provide a connection between the Burke-Gilman Trail (BGT)–which runs through the city–and the town center. “Currently, pedestrians and bicyclists must cross up to six high-volume vehicle lanes on State Route 522 near the Lake Forest Park Town Center and BGT,” Sound Transit noted. “The connector will provide a separated structure or pathway to enable transit users to cross safely.” If funded, the project is targeted for completion by 2024, which is the same year that Sound Transit’s bus rapid transit corridor will open along SR-522.

In East King County, local jurisdictions have proposed 14 different projects. These project proposals range from $271,000 to $6 million, which collectively total approximately $20.6 million. The collective funding requests in this subarea are the highest of all five subareas.

Redmond is seeking $1.17 million to construct a two-way cycletrack on 156th Ave NE between NE 28th St and NE 40th St. This would build upon other local bike facilities and provide better access to the RapidRide B Line and future light rail station opening at the Microsoft campus in 2024. The project would be completed by 2022.

Meanwhile, Renton is pursuing a multiuse trail project along S 7th St in the city. The trail segment would be fairly short from Shattuck Ave S and Burnett Ave S to connect up with an existing trail facility to the north. Along S 7th St, additional improvements would be implemented at intersections to the west increase safe crossings for people walking and riding bikes. The project would be rolled out by 2023 and cost $2 million, offering connections to a major transit facility, the South Renton Park-and-Ride, which will also feature Sound Transit’s new I-405 bus rapid transit line in 2024.

Kent has very small ambitions to spend $273,683 on installation of rapid flashing beacon midblock crosswalk with a raised median at 2nd Ave N on W James St. This is near Kent Station and would save pedestrians a considerable amount of walking to get across the street, improving overall station access. Implementation of the project happen in 2021.

Tukwila submitted a very highly recommended project that would improve pedestrian and bike access to the local Sounder commuter rail station. The $3.29 million project would be completed in 2021 and help deliver expanded and safer non-motorized facilities between the station and a future transit-oriented urban district along the Green River. The improved facilities also would have access the Interurban Trail and Green River Trail.

SeaTac wants to spend $1.5 million to identify improvements near intersections of the city’s three light rail stations. These improvements would generally make pedestrian and bicycle access to the stations safer since people must generally cross International Blvd, which has many lanes to cross with high volumes and often high speeds. Funding could be used to construct improvements within a quarter-mile of the stations, too. According to Sound Transit, it is possible that “projects may include lighting, sidewalk widening/shared use path opportunities, improved buffering between nonmotorized and motorized modes, landscaping, signage, place making, and targeted improvements at the SeaTac/Airport Station drop-off area.” Project implementation is targeted for 2022.

Tacoma’s project for the Hilltop Neighborhhood is the most expensive, but would provide key improvements for streetcar access. The Tacoma Link streetcar extenson is poised to open in 2022, the same year as Tacoma’s proposed Hilltop Neighborhood improvements. The $3.5 million project would involve new “Americans with Disabilities Act (ADA) compliant sidewalks, bike facilities, new lighting, street furniture, and landscaping,” Sound Transit said. The project could help enhance the overall quality of neighborhood investments to attract transit-oriented development.

Meanwhile, Pierce County is seeking $2 million to improve a portion of 112th St S that is intersected by SR-7. This same highway facility is served by Pierce Transit’s Route 1 workhorse bus line and will be upgraded to bus rapid transit in 2022. The project would wide pedestrian facilities, add a turn lane, and improve lighting along 112th St S between A St S and C St S. This area is designated for significant commercial and multifamily development. Project completion is due in 2025.