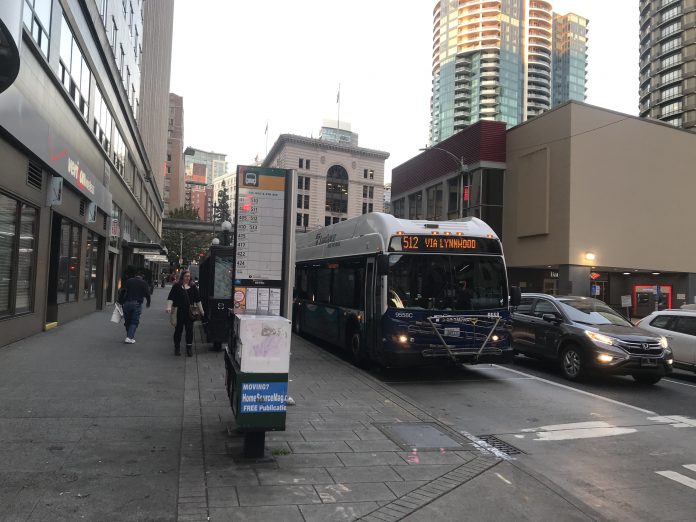 Seattle keeps rolling out new and improved bus lane segments. Coming on the heels of new red “Elmo” paint for existing bus lanes on Westlake Avenue, 5th Avenue, and Pike Street, the Seattle Department of Transportation (SDOT) will upgrade bus lanes on Olive Way. The bus-only lanes will be in effect 24 hours a day on Olive Way between 4th Avenue and 8th Avenue.

In facilitating the bus-only lanes, SDOT is making several changes to the existing configuration and restrictions on Olive Way. The existing bus lanes only have restrictions during the morning (6AM to 9AM) and afternoon (3PM to 7PM) peak hours. This will become a permanent all-day restriction with red paint markings. An existing commercial loading zone on Olive Way, located between 4th Avenue and 5th Avenue, will be moved. SDOT plans to do this in order to allow for better right turning movements off of Olive Way.

As a one-way northbound street, the Olive Way bus-only lane benefits outbound trips from Downtown Seattle heading for I-5. The location of the bus-only lane weaves from the center lane between 4th Ave and 5th Avenue to the furthest right curb lane on the remaining three blocks.

SDOT has indicated that the bus-only lane will benefit about 33,000 daily riders. A long list of bus routes use the corridor, topping 39 different local and commuter routes on weekdays. On Wednesday, Dongho Chang, the chief city engineer, tweeted a preview of the bus lane layout.

Earlier this summer, the street became a lightening rod. A woman took to the street from a bus stop on Olive Way at 6th Avenue and waived scofflaw motorists out of the bus lane, highlighting how motorists routinely abuse bus-only lanes. She went viral when she was taped bluntly telling the motorists to “get the f*** out of this lane!” Motorists appeared to comply with her demands.

If only the State Legislature permitted camera enforcement of bus lanes to do this so people don’t have put their lives at risk to get a modicum of bus lane compliance. The State Senate failed us last session.

The following week, transit advocates (including friends of the blog Queen Anne Greenways and Transit Runner) inspired by our local bus lane hero returned to the same bus stop with red flags to waive motorists out of the same bus lane. Later advocates organized by Seattle Greenways and 350 Seattle of the Move All Seattle Sustainably (MASS) coalition joined in too, urging policymakers to #ClaimTheLaneForClimate. That direct actions seemed effective at shaming motorists out of the bus lane–albeit temporarily–and now they’ve won bus riders permanent red Elmo bus lane markings.

However, as we have said time and again, this is the tip of the iceberg. We should be adding bus lanes every chance we get. MASS has a list of 20 high priority bus lanes to expedite. We should have news pretty soon about the ones MASS is pushing for this budget cycle. Mayor Jenny Durkan’s proposal–despite adding some stretches of bus lanes on Rainier Avenue and some spot improvements–still lacks for ambition.