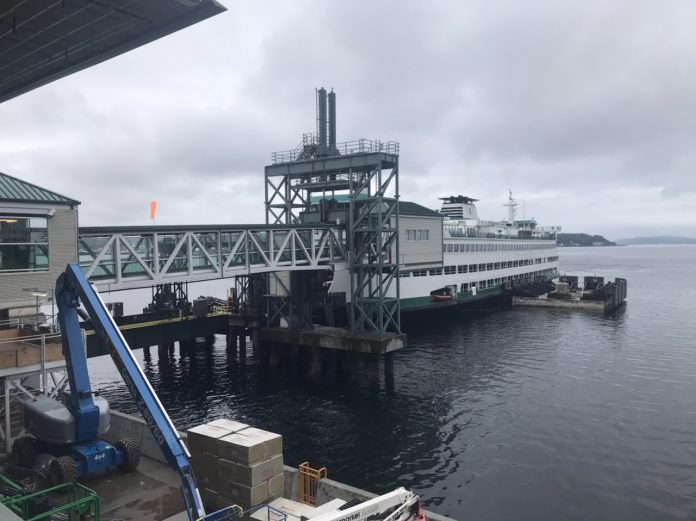 Washington State Ferries (WSF) saw ridership fall in 2019 after reaching a 16-year high the year prior. Ridership dropped an astounding 3.2% or 802,249 rides to 23,884,789, nearly wiping out two years of gains. WSF blamed the ridership decline on wintery weather last year. Ridership was down a third during the month of February, the agency reported, with some days managing only 10,000 riders when the daily average would typically range from 50,000 to 60,000 riders. But other factors may have played a role in the ridership decline, too, such as major construction at terminals and increasingly competitive passenger-only ferry service operated by other agencies.

The difficulties of last winter cannot be underscored, as many will remember not-so-fondly as Snopocalypse 2019. People across the Central Puget Sound were holed up in their homes for days due to snow and ice. The weather disrupted transit of all varieties, leading to King County Metro launching its trimmed down Emergency Snow Network (ESN) and eventually promising institution of free fares when the ESN is activated. For WSF, first quarter results showed ridership declined 5.8% from the same time in 2018 while the fourth quarter was only down 1.6%, partially affirming WSF’s excuse for ridership decline.

“Following all that snow, we reevaluated our storm plan to provide appropriate service that matches demand,” said WSF Assistant Secretary Amy Scarton. “We recently released new severe weather schedules that align with other reduced transit. We’ll let our customers know if and when we switch over to them through our ferry alerts and social media channels.”

Kitsap Transit has also likely cut into WSF ridership due to its newish passenger-only fast ferries. The agency launched two routes in 2018 operating between Bremerton and Seattle and Kingston and Seattle. The Bremerton route directly competes with WSF’s fourth busiest route.

WSF ridership numbers on the Seattle-Bremerton route showed a 15% year-over-year decline or 432,770 fewer rides. The decline was even more pronounced for walk-on passengers, falling 18.4% or 339,960 rides. In September, the Puget Sound Regional Council reported that Kitsap Transit ferries grew by 24% year-over-year–about 110,000 additional rides. Whether or not full-year numbers for Kitsap Transit’s Seattle-Bremerton route make up most of the difference is still not yet clear, but the mid-year year-over-year increase strongly suggests that it is possible.

Ridership losses on WSF’s Edmonds-Kingston route might also be attributable to Kitsap Transit’s second passenger-only fast ferry launched in late 2018. WSF reported a 4.2% decrease (-57,439 rides) in vehicle passengers on the Edmonds-Kingston route. Kitsap Transit’s Kingston-Seattle passenger-only fast ferry may be offering some former WSF vehicle passengers a more direct and speedier way to reach the Central Puget Sound. Another Kitsap Transit fast ferry is due to launch next year between Southworth and Seattle, which will directly compete against WSF’s Triangle Route and likely temporarily drive down ridership on the state route.

Ongoing ferry terminal construction is another significant contributing factor to the WSF ridership decline. The Colman Ferry Dock saw major changes in the past year as the ferry terminal is rebuilt. The passenger waiting space was all but demolished and moved while temporary gangways were installed to facilitate construction above, below, and to the side. Likewise, major terminal reconstruction has been taking place in Mukilteo. While construction has come with mitigation efforts, the active work zones invariably have been disruptive to both walk-on and drive-on ridership.

While the top-line ridership decline is 3.2%, walk-on passenger declines actually outpaced vehicle passenger declines, falling 4.1% (-300,906 rides) versus 2.9% (-191,640 rides). The Seattle-Bremerton route is obviously a major contributor to both counts, but declines on several other major urban routes did not help cover the difference. Significant walk-on ridership declines hit the Mukilteo-Clinton (-1.2), Vashon-Fauntleroy (-4.6%), and Southworth-Fauntleroy (-5.7%) routes, too. On the flip side, the state’s busiest route between Bainbridge and Seattle saw walk-on ridership grow by 1.7% or 55,758 rides. That was more than offset, however, by vehicle passenger ridership falling by 5.4% or 68,579 rides, presumably due to construction at Colman Ferry Dock.

Only six state routes posted year-over-year absolute ridership gains. The most significant gain was on the Southworth-Vashon route, which saw ridership increase 5.2% or 10,780 more rides. That was particularly healthy for walk-on passenger growth with a 7.8% increase or 6,852 more rides. Other routes that saw absolute ridership gains included Tahlequah-Point Defiance (+1.2%), Port Townsend-Coupville (+0.5%), Anacortes-Shaw (+0.3%), Anacortes-Orcas (+0.1%), and Anacortes-Sidney (+6.8%).

WSF’s annual ridership decline is probably just a temporary blip. Ridership had been growing for years as population boomed on the islands and western side of Puget Sound. Those connections to communities on the eastern side of Puget Sound have increasingly become important. That seems unlikely to change in the years ahead. However, passenger-only fast ferry services may be showing their promise to commuters who want a quicker way to travel to work than traditional state ferries. That could mean stunting walk-on passenger ridership during peak hours on competing state routes for years to come, but demand for ferry service is bound to increase on balance as population surges on the west side of the sound.

WSF plans to continue investing in overhauling the state ferry system with new vessels and upgraded terminal facilities. Last year, the agency published a long-range plan that would increase the number of vessels over the next 20 years, improve maintenance schedules, and ultimately add more trips. The state is also in the process of converting three Jumbo Mark II Class vessels to hybrid-electric propulsion in order to reduce carbon emissions and has commissioned construction of a large all-electric ferry.

The long-range plan, however, is largely in the hands of the state legislature, which must approve system improvements and expansion. If realized, the long-range plan would support projected ridership demand that is expected to increase 30% and reach 32.5 million annual riders by 2040. Most of this growth is anticipated to come from walk-on passengers, which are projected to grow by 45%.