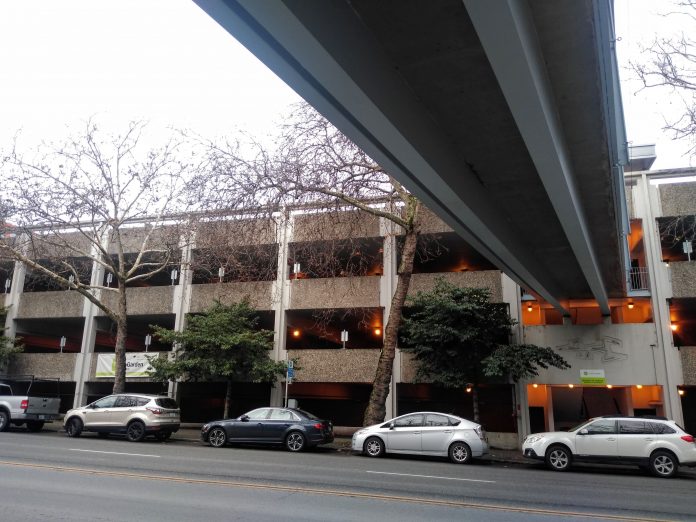 There may not have been a better illustration of the degree to which transportation planning for the new Seattle Center arena is weighted toward accommodating personal cars than the fact that the Mercer Upgarden—the only P-Patch garden in the neighborhood, located on top of Seattle Center’s Mercer garage- was to be kicked out to add in a few more parking spaces that arena users would need.

Queen Anne & Magnolia News was the first to report last October that the Upgarden was to be removed from the rooftop level of the City-owned parking structure by the time the new arena’s doors opened to the public. It’s been in place since 2011 and has provided space for 86 garden plots above the din and fumes of Mercer Street below.

But at the end of 2019, newly elected Councilmember Andrew Lewis announced at his ceremonial swearing-in, held on the roof of the garage, that the City had reached a deal with Oak View Group, the developer of the new arena, that would keep the Upgarden in place. With the announcement, Mayor Jenny Durkan stated that under the arrangement that the garden would stay in place “until light rail is designed and planned for Seattle Center.” This harks back to the agreement the City had already made with Oak View Group regarding the entire Mercer garage, an aspect of the deal to see Key Arena renovated that mostly went unnoticed at the time of its signing in 2018.

The lease agreement that the City of Seattle has entered into with Oak View Group specifically stipulates that the “landlord covenants and agrees that it shall not voluntarily demolish or demolish and rebuild the Mercer Street parking garage at any time prior to the earlier of” the following three scenarios.

In other words, if the Mercer garage goes offline before light rail opens (if that’s anytime before the first day of 2035), then the City would be in violation of its lease agreement. That same agreement also states that if any replacement for the Mercer garage contains less than 800 parking spaces, then the terms of the lease should also be renegotiated.

The prioritization of maximizing space in the Mercer Street Garage is not surprising given the comments heard during the Environmental Impact Statement process from the most influential commenters.

During that process, comments submitted on behalf of the Seattle Center as a City department expressed the importance of maintaining parking access for the existing cultural amenities at Seattle Center. “Given the demographics of Seattle Opera, Pacific Northwest Ballet and Seattle Repertory Theatre attendees, this parking access is essential to their fiscal health, just as the school bus access at the south end of the campus is to Seattle Children’s Theatre,” they wrote.

The Mercer Corridor Stakeholder Group, which was made up of nearby community councils and groups as well as large corporations like Amazon and Pemco, actually recommended that the City consider implementing a program to discount City-owned garages like the Mercer garage to compensate for a loss of on-street parking spaces due to the prioritization of transit and bicycle traffic.

The emphasis on parking availability seems to point toward the Mercer garage sticking around for the long haul. But the three-acre parcel that the garage sits on is prime real estate that the City could put to better use. And it’s also approaching the age where maintenance costs could really escalate.

A few blocks away is an example of how valuable the parcel would be: the Mercer Megablock properties (which did include a small noncontiguous parcel on Dexter Ave N) sold for a staggering $143 million. I am not suggesting that the City should sell the Mercer garage property, but rather that a priceless City asset is being wildly underutilized.

The 2008 Seattle Center Century 21 Master Plan recommended that the Mercer Street Garage be demolished and replaced with an “underground parking structure of approximately 1,300 spaces in the bowl of the current Memorial Stadium.” Spending City funds to construct more than 1,000 parking spaces on land that’s currently controlled by Seattle Public Schools should not be considered an option, but the master plan’s recommendation that the Mercer garage be put to best use is not one we should let sit in a drawer for another decade. Unfortunately, the City is now locked into providing a certain amount of City-owned parking even as Oak View Group builds a new parking structure directly underneath their new arena.

All of Seattle Center’s long-range planning has seen the northeast quadrant of the campus as an opportunity, with a 2016 report calling it the “biggest opportunity for transformative change at Seattle Center.” The former Mercer Arena (not to be confused with Key Arena) at Mercer Street and 4th Ave N has already been replaced with the Seattle Opera Center, with little public conversation about how it would integrate with the rest of campus. Now that it is in place, it has brought only intermittent activation to that corner of Seattle Center.

Even though the garage is separated by infamously unpleasant Mercer Street, it is an opportunity to enhance Seattle’s central open space amenity that is Seattle Center–if we let it.