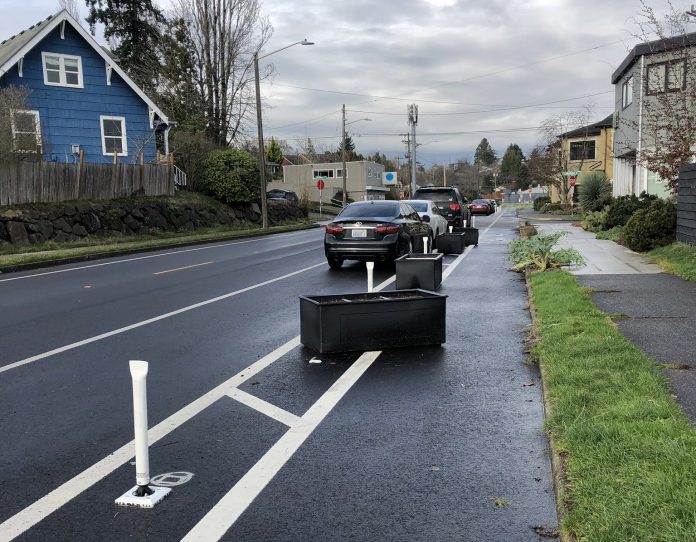 The Seattle Department of Transportation (SDOT) has abruptly removed most of the planter boxes that it had placed on Wilson Ave S in the Seward Park neighborhood to provide a buffer between a new protected bike lane and a lane of free street parking.

The increased hazard for people biking caused by the removal of the planters appeared to take a backseat to the desires of other community members in making this decision, which was announced on a Friday and completed by Sunday. SDOT’s Ethan Bergerson told The Urbanist that they were “removed at the request of the people who live in the neighborhood.”

In response to a question about what prompted their removal, Bergerson continued: “For context, we originally added the planters between the flex posts based on requests from the Wilson Ave S neighbors who wanted something more visually appealing than just posts. However, after the planters were installed, these same neighbors said that they no longer wanted them because they didn’t have room to open their passenger car doors and they weren’t as nice to look at as they imagined. We also heard reports of numerous cars bumping the planters into the bike lane and creating obstacles for people on bikes.”

The protected bike lane was installed last year as part of planned repaving work. After the planters were initially installed in July, SDOT went back out in August and moved them “so they will be 20-40 feet apart and will no longer be side-by-side next to parking spots.” Some planters were removed that were adjacent to business areas. But apparently parking issues persisted, in addition to some local disappointment in the planters’ aesthetics. SDOT has left planters in select locations near intersections to avoid people parking and obstructing views but considers plastic posts alone to be sufficient protection for most of the bike lane. However, do people biking on the corridor feel the same way?

Tonya Ricks Sterr, who lives near Wilson Avenue, told me in a message she felt differently. “Plastic posts, or nothing, is not going to be enough separation for me to feel comfortable letting my nearly-6-year-old riding this stretch of road anymore,” she said. “I was so excited for him to gain the confidence of riding on an actual road, and to not feel absolutely terrified while doing so!”

She continued, “Folks who just want a way to get around our city safely worked really hard to advocate for this stretch of road. It’s incredibly disheartening when the small scraps we earned (only one direction protected) is being taken away. Drivers still speed down Wilson, easily evidenced by the frequent collision reports. Paint won’t protect us.”

She also submitted a photograph taken this past Monday, after the planters had been removed, showing a vehicle parked in the bike lane, which is now easier to access given the distance between plastic posts and no planter boxes.

The issue of maintaining the planters likely contributed to their removal. Since they were not anchored to the road, planters that were hit by a car would often end up in the bike lane. Plants in the boxes also also required tending to. But again, those are issues to be solved in the interest of the purpose the planters provide: making people on bikes feel safer.

The original purpose of the planters was to provide protection, which they do better than posts. The fact remains that most of the key segments of Seattle’s bike network are being constructed with only a post divider. Some of these streets have a lot of fast moving traffic, like Dearborn Ave S. The department has struggled to maintain even these posts, but they don’t provide adequate protection.

This planter saga on Wilson Ave S follows a different issue that SDOT encountered with similar planter boxes. In 2018, the 2nd Avenue protected bike lane had planters removed from a stretch directly adjacent to the Chief Seattle Club, because the planters were being used to sit on or congregate around. Essentially, the architecture was made more hostile in order to encourage people to move along.

In that case as well, the real or perceived safety of people using the bike lane appeared to be secondary to other considerations. Who knows where it could happen next.