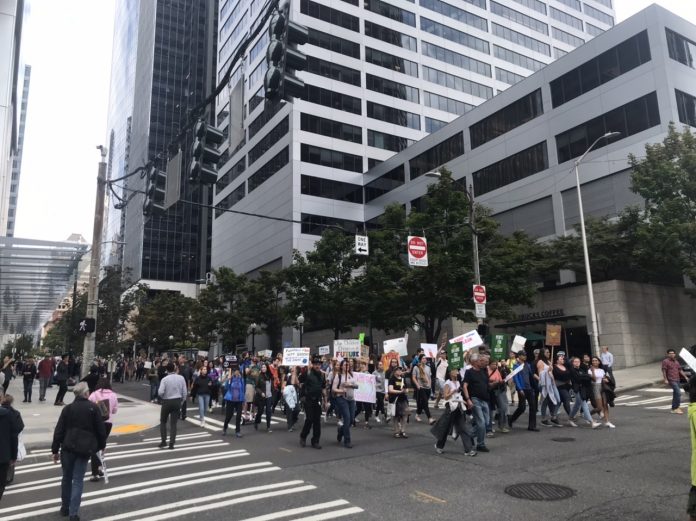 With a short legislative session, Democrats and Republicans have been moving swiftly to get bills through the legislative process. Several major bills affecting environmental quality, housing, land use, and transportation have seen significant legislative progress with a major cutoff point looming today at 5pm. However, a many bills that are still alive may not make today’s cutoff and could wind up dead unless later deemed “necessary to implement the budget.” Legislators have flexibility in keeping bills alive by having a revenue impact that generally benefits the state budget.

Bills That Are Still Stuck

A long list of bills that have made it to the respective Rules Committees or house floors could end up dying today. These include the following:

Democrats in the House of Representatives advanced a low-carbon fuels standard for a second year in a row. House Bill 1110 now heads to the Senate, where it stalled out last year. The bill is a high priority in the environmental community because it would progressively require transportation fuels to become less carbon intensive every year.

As currently drafted, the bill directs the Washington State Department of Ecology (DOE) to promulgate a rule that requires many transportation fuels to reduce their carbon intensity progressively through 2035. Carbon intensity would need be reduced 10% below 2017 levels by 2028 and 20% below 2017 levels by 2035. Exemptions from the rule, however, would be numerous by not applying to vessels, locomotives, aircraft, exported fuel, and electricity.

Pressure to pass a statewide law has been mounting in part because the Puget Sound Clean Air Agency has a draft rule of its own, which is pending adoption as soon as this spring. The rule would apply to King, Pierce, Kitsap, and Snohomish Counties, but a statewide framework would ensure a more consistent approach and greater impact.

On-demand, app-based transportation services like ridehailing, food delivery, and package delivery have been growing rapidly in the digital era. To curb emissions associated with these services, House Democrats have proposed legislation that would gradually require providers to reduce per capita emissions in delivering services. House Bill 2310 passed by House Democrats, but was narrowed considerably for now to only address ridehailing services by having the DOE collect information on vehicle miles driven and the associated carbon emissions. As soon as 2023, the companies would need to create a plan to reduce carbon emissions targets set by the DOE and then begin implementing them in 2024. Separately, the DOE would need to provide a report on emissions could be reduced by the food and package delivery sectors.

House Bill 2311 also states that it is a priority to achieve net zero greenhouse gas emissions by 2050, which means offsetting whatever difference may actually exist in emissions. State agencies have separate goals, which are generally more ambitious on decarbonization timing. Additionally, the bill would create a separate policy of the state to proceed with sequestering excess greenhouse gas emissions beyond the state’s obligations under the law.

Single-use bags create a lot of unnecessary waste since most are made of poor plastic materials. A bill advanced by Senate Democrats would require the use of single-use bags and require them to be made of minimum recycled content. A basic 8-cent charge for bags would need to be collected by retailers and other local charges would generally be preempted. Senate Bill 5323 will undoubtedly need to be amended before returning to the Senate for final passage.

Other significant environmental bills that have passed out of the chamber of origin include Senate Bill 6147 that restricts shoreline armoring practices to the least harmful alternatives, Senate Bill 6278 that bans the commercial use of new water rights for bottling, and Senate Bill 6430 that creates an industrial waste coordination program, Senate Bill 5811 would allow the DOE to adopt California’s zero emission vehicle (ZEV) program which requires a certain percentage of cars to be sold as ZEV, and House Bill 2405 that allows local jurisdictions to create programs that assist commercial properties and developments to invest in environmental efficiency of buildings.

On the transportation front, Democrats have been advancing bills that would allow people biking to treat stop signs as yields.

The practice often referred to as the “Idaho Stop” could come to Washington if Senate Bill 6208 is passed this year. Bicycle advocates have long tried to get state authorization to legalize the treatment of stop signs as yields by bike riders, a practice many riders already use albeit at their own legal risk. The bill was passed out of the Senate with the condition that stops signs at railway tracks and on buses must be treated as normal stop signs.

New authorization for Seattle to use enforcement cameras for violations involving intersection blocking, crosswalk blocking, and traveling in transit-only lanes also appears to be advancing. The Senate Transportation Committee held a public hearing on one version of the bill, which may address some of the concerns that left Senate Democrats blocking passage of it last year. House and Senate Democrats both passed their versions of the bill this month, but either version will require reconciliation before final passage this year.

As a second phase of last year’s urban land use reform bill (House Bill 1793), House Democrats proposed an additive bill to increase urban housing supply. House Bill 2343 generally only applies to cities with populations exceeding 40,000, and in some cases counties, that participate in the Growth Management Act. The list of options that cities are encouraged to consider in increasing housing supply include allowing duplexes, triplexes, and courtyard apartments in zones where they are not allowed and a variety of reforms around accessory dwelling units.

Jurisdictions that choose to adopt specified reforms will have an additional two years–until April 1, 2023–in order to reduce procedural hurdles related to appeals under Growth Management Act and the State Environmental Policy Act (SEPA). Additionally, the bill expands a cap on required parking for market rate multifamily housing near frequent transit, preempts SEPA appeals over aesthetics if a local jurisdiction has a design review program, and directs the DOE to remove parking as an element of the environment in SEPA Checklists.

Offshore drilling would be further prohibited under the Shoreline Management Act and Ocean Resource Management Act if Senate Bill 6432 is passed this session. The bill by Senate Democrats would ban the practice in the outer coastal waters of the state in addition to the Puget Sound and Strait of Juan de Fuca where it is already prohibited. Infrastructure to carry out offshore drilling or extraction would be heavily restricted.

A hard-fought bill to skip the SEPA process for permits siting temporary shelters or transition encampments for people experiencing homelessness has cleared the Senate for a second year in a row. Senate Bill 5946 lays out several criteria in waiving SEPA when reviewing such permit applications for siting and appears to have bipartisan support, but it never wound up getting a floor vote in the House of Representatives last year. A related bill passed the House of Representatives that limits the kind of conditions that a city or county can place on religious organizations that host outdoor encampments, safe parking efforts, indoor overnight shelters, and temporary small houses on property owned or controlled by religious organization.

Other significant land use bills include House Bill 2673 that provides more flexibility in approving infill development in Urban Growth Areas that is “roughly equal” rather than just “lower than” adopted plans for residential and non-residential development, and House Bill 2687 that would require GMA counties and cities to plan for single-family housing types, such as single-family detached dwellings, duplexes, triplexes, and townhomes, as part of comprehensive plan housing elements. That latter bill, however, could be a double-edged sword as it establishes a precedent of single-family housing as a priority in the GMA.

Local jurisdictions have long used zoning codes to limit the number of people who can live in dwelling units. However, Senate Bill 6302 would go beyond federal guidance on the restraint of such restrictions. Senate Democrats have passed a bill that would preempt local jurisdictions from regulating the number of unrelated people that can live in a dwelling unit or household with the exception group homes and short-term vacation rentals. The bill also would not limit building code occupant load restrictions.

House Bill 2535 serves the interest of residential tenants by giving a grace period to pay rent before late fees are charged. As passed by House Democrats, tenants will have five days to pay their rent without incurring a fine. Another bill benefiting tenants would require landlords to allow tenants to pay most deposits, nonrefundable fees, and the last month of rent in installments if the last month’s rent is required and the total fees due would be more than 25% of the first month’s rent. House Democrats let Republicans amend House Bill 1694 with a condition that a hold fee not be counted in the fees.

Following legislation from last year that allows cities and counties to opt into a state sales and tax program for affordable and supportive housing, new legislation by House Democrats would allow more time for jurisdictions to opt in and simplify the tax structure. House Bill 2797 has already passed out the House of Representatives.

Several other minor bills have also passed out their house origin, such as House Bill 2497 which expands financing programs to include development of permanently affordable housing and Senate Bill 5366 which allows all urban centers to provide property tax exemptions for mulitifamily developments beginning in July 2022 and through July 2025 for a period of 12 years.