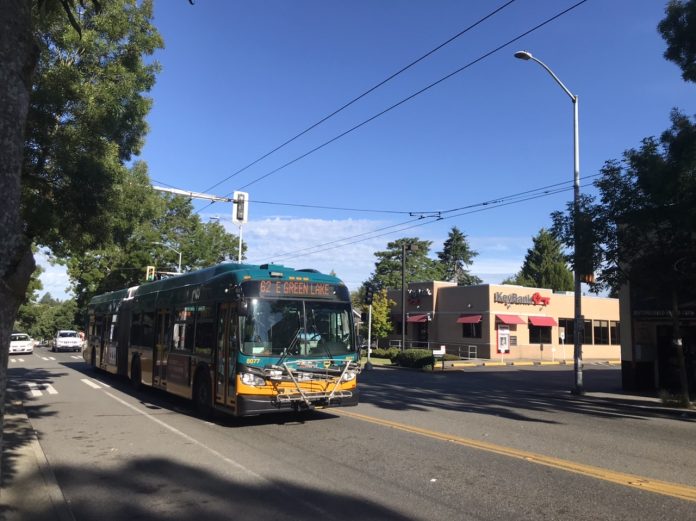 The Covid-19 pandemic has been very disruptive to transit, forcing agencies to vastly change operational practices and slash service while seeing ridership fall off a cliff. For King County Metro, that has meant ridership losses in the 70% to 75% range. That has mostly bottomed out with some signs of ridership recovery, but the pattern of ridership is decidedly different from pre-Covid times. Metro has been clear that operations will persist in an altered form and at reduced levels for quite some time. Agency staff pointed to long-term financial constraints that may well drag on after the pandemic lifts, last week at the Regional Transit Committee meeting, forcing even heavier and lasting cuts to service in 2021 and 2022.

On Monday though, Metro did restore enough service to bring service levels to about 85% of pre-Covid times, including resumption of entire routes. For the time being, Metro plans to run a fairly consistent style of service during the summer that looks a lot more like Saturday service: an all-day network without many peak-hour services. In the fall, further service changes are poised to be phased in.

At the Regional Transit Committee meeting, agency staff said that the pandemic has changed ridership patterns considerably. Morning and afternoon peak commute demands have largely evaporated as fewer people ride transit to offices and businesses in urban cores. Ridership is now hovering at about 124,000 daily riders, down 71% from normal times, with ridership losses having been most heavily focused on express routes in Seattle and the Eastside.

Meanwhile, ridership has been steadier and losses more minor on routes in South King County communities and some areas in Seattle where people tend to be more reliant on transit to get around. However, Metro staff have seen habits changing with persistent all-day demand, particularly during midday periods. That could suggest people who are working from home are using transit locally for midday needs.

Agency staff painted a very precarious financial outlook. Going into the pandemic, Metro already had a 10-year, $1 billion shortfall as a starting point for new investments. That was considered a manageable challenge since revenues were still well positioned with opportunities for additional resources ahead, but the pandemic jeopardized the funding streams on which Metro was relying.

Sales tax revenue has plummeted and is expected to be $200 million lower for 2020 than originally projected. Through 2022, the sales tax shortfall is expected to widen to a $465 million loss. But the long-term impacts are similar to Sound Transit’s projections where approximately $1.2 billion in sales taxes projected will simply evaporate over the next 10 years as lower economic activity in the region occurs. On top of this, Metro has suspended fares during the initial pandemic response phase and expects significantly lower ridership during the interim. Farebox recovery is generally pegged at 25% of bus service costs, making it another major source of revenue for the agency.

Despite these revenue challenges, $242 million in emergency response funding from the federal CARES Act has been allocated to Metro to offset some revenue losses. Another $260 million is sitting the budget stabilization account for “rainy day” events like this, allowing Metro to draw down from it to ease pain in the interim. But these funds will not be enough to completely erase the long-lasting financial challenges ahead.

Metro staff presented a similarly bleak outlook for the bus network. Up to 30% of pre-Covid service may need to be cut for the foreseeable future in projected financial scenarios, but that could be blunted if the recovery process is rosier than Metro’s estimates and if state and federal actors come through with more funding assistance. A more measured level of cuts at 20% is also possible, and in both scenarios this could be less if the Seattle Transportation Benefit District (STBD) funding is maintained.

About 10% of projected cuts (or around 350,000 service hours) are directly related to the STBD, which is poised to terminate this year if not reauthorized in some form. The current STBD taxes expire in January, meaning that a $60 vehicle license fee (VLF) and 0.1% sales tax will go away. It is still not yet clear if a rescue package for the STBD is forthcoming this year. But if there is one, it may have to come in the form of a voter-approved sales tax only as the VLF option was de facto repealed by Initiative 976 last year, though appeals to block the initiative are still working their way through the courts and have been partially successful. But regardless, Metro has to assume the worst-case scenario as a starting point.

In addition to service cuts, Metro is looking at serious expenditure reductions in the capital program in the realm of 30% to 40% that reflects core objectives of the system being provided. Agency staff highlighted the RapidRide expansion program as envisioned in Metro Connects and electrification of the bus fleet as areas that may see particularly heavy reductions. Other agency programs may need to contract by a smaller 5% to 10%, depending upon how they align with core service and capital objectives.

Substantial changes will be required to the bus network, even in the best of circumstances. That means bus restructures will be necessary, touching all areas of the system. Agency staff did say that they are engaging with community groups, major institutions, and business organizations to get a pulse on service needs and when riders may be coming back to the system. The pandemic could be a big reset, agency staff said, that results in new commuting habits to work, such as staggered and later trips to work, more teleworking throughout the week, and need for midday service for people staying closer to home. That could mean a permanent shakeup to what the all-day and peak-hour networks look like.

Metro is also looking to put the Mobility Framework, an equity focused policy tool, to work at informing analysis and policy decisions for restructuring service. That means the restructuring process will likely put a strong emphasis on ensuring enhanced service for communities of color, people with disabilities, members of limited-English speaking communities, and low-income populations. The framework further emphasizes the important of putting service where there is mixed-use zoning, increased density potential, and affordable housing.

During the meeting, Metro staff was asked about whether the Northgate bus restructure could be a boon for systemwide service levels and the general answer was “yes.” That is because many peak express routes will be able to go away in favor of local service and transfers at new light rail stations in the University District, Roosevelt, and Northgate, saving substantial sums of service hours. Though that does likely mean paring back some of the restructure benefits, such as new peak-hour shuttle routes and temporarily cutting overall bus frequencies. Nevertheless, riders will have a frequent option with light rail opening next year mitigating some of the impacts.

The budgeting process is not far off and will be instrumental in setting the tone for permanent service changes down the road. In the fall, a revised budget plan will be sent to the King County Council for consideration and adoption. The effects of any budget changes will then be implemented successively in 2021, beginning as soon as March 2021 with STBD-related service reductions. More consequential cuts network-wide will then be implemented in the September 2021 service change with possible further reductions in 2022 if the financial situation does not improve.