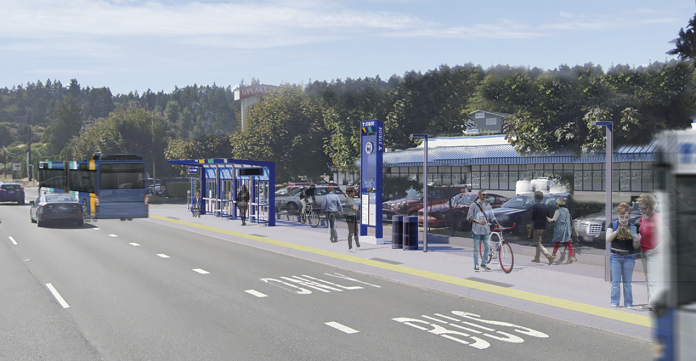 The Stride bus rapid transit line slinking its ways from Shoreline to Bothell along NE 145th St and SR-522 has gotten its latest design update. Dubbed the S3 Line in Sound Transit’s naming system, the project has reached the 30% design milestone. Last month, Sound Transit shared revised plans through an online open house of the corridor that are fairly similar to the 10% design details from last year. Today is the last day of the online open house period.

Long stretches of SR-522 already have bus-only and business access and transit lanes, particularly between NE 145th St and the eastern edge of Kenmore. Much of the S3 Line project, however, centers on adding new bus priority facilities (i.e., lanes and signals) in the roadway and constructing stations, though new parking facilities and pedestrian access are planned as well. A total of 12 stations will dot the corridor between the new Shoreline South/145th Station and the planned I-405/SR-522 transit hub.

In the fall, Sound Transit made significant changes to the S3 Line design. Among these were fewer stations stop, a new alignment through Bothell, and eliminating the tail to Woodinville in favor of a separate less frequent bus service. There were also a series of right-of-way refinements, which was a mix of good and bad for riders.

The latest design update goes much deeper than before with detailed block-by-block roll maps showing planned improvements overlaid on scaled aerials. This level of detail allows for a more precise understanding of what the improvements might look like and how they would function. Those details, however, do not show the preliminary design for the two terminal stations at either end of the S3 Line.

Zooming into key locations on the roll maps, the improvements planned are mixed:

Michael Bjork, a transportation engineer and transit advocate, told The Urbanist that he is reaching out to Sound Transit to express concerns about some project priorities.

“People will be accessing this transit line primarily by walking and biking given the low numbers of parking spaces versus anticipated ridership,” Bjork wrote. “As proposed, a significant amount of money and resources will be spent to add transit access-via-parking at station sites despite a majority of transit users accessing Stride by non-motorized means.”

Bjork’s chief concerns are that some chosen locations are orphaned from sidewalks, making them treacherous for riders to reach, and the over-emphasis on parking. He has suggested that each station have at least one block of sidewalks in each direction, squaring up intersections, and reducing crossing distances where feasible. Another strategy he mentioned is using roundabouts at more intersections.

As for parking, Sound Transit plans to locate a parking structure right on a prime corner lot off of NE 185th St. Blocks surrounding that street have had major mixed-use, apartment, and townhouse projects spring in a matter of years. The McMenamins conversion of the old elementary school has also been a major for change. Together, this has completely changed the character of Downtown Bothell as a more 24-hour neighborhood that people live in.

Use of the corner lot may not be an ideal location. Bjork suggested that the community, Sound Transit, and the school district working together to consolidate a parking structure on the Pop Keeney Stadium lot may be a better way to maximize dual use between commuters, eventgoers, and patrons of local retail. It also would allow the lot closer to the S3 Line to better serve a transit-oriented development function.

Bothell City Councilmember Mason Thompson did not say where parking should go, but he did outline a parking policy principle of his. “I’m not going to comment on any ongoing conversations between the City of Bothell and any other organization. I will say that it is always my personal preference to put parking where we can’t house people and services and use land where we can house people and services to do so,” he told The Urbanist. “Especially when that land is on a future bus rapid transit line, a regional cycling trail, and within walking distance of most needed services.”

Coby Zeifman, a bike and transit advocate from Bothell, pointed out last month that a trail connection from the planned I-405/SR-522 transit hub could be problematic. The trail would have to weave its way through the milieu of interchange ramps and cross North Creek to link up with the North Creek and Sammamish Trails.

Zeifman is right that this could be a challenge, as Sound Transit will want to narrowly impact the critical environments surrounding the creek. The North Creek Trail for its part is already an uncomfortable space in the dark since it is heavily forested with no lights. As the agency designs this connection, adding lighting to the trail and having a wide connection could greatly improve comfort for people walking, biking, and rolling and increase the chance that nearby residents and University of Washington-Bothell/Cascadia College student use it. In addition, a trail connection to the east toward Woodinville certainly would be welcome in reaching more people who live and work in the North Creek area.

Sound Transit would also be wise to improve the road trail segment on Woodinville Drive, which intersect at-grade with SR-522. The segment is somewhat uncomfortable for people walking, biking, and rolling given that there is minimal protection from car traffic and an awkward street crossing to continue on the Sammamish Trail.

The next step in the process is environmental review. The project is subject to the State Environmental Policy Act, which requires the agency to prepare an environmental checklist and issue a threshold determination of how the project might impact the environment. That process will allow the public to weigh in with comments and may result in additional mitigation measures for the project.

For now, Sound Transit has an online open house where an interactive map of designed improvements and the roll maps can been reviewed. While the online open house is not formally taking feedback on the design, comments can still be emailed to the agency.

Updates: This article was updated to include comment from Mason Thompson, a Bothell City Councilmember.