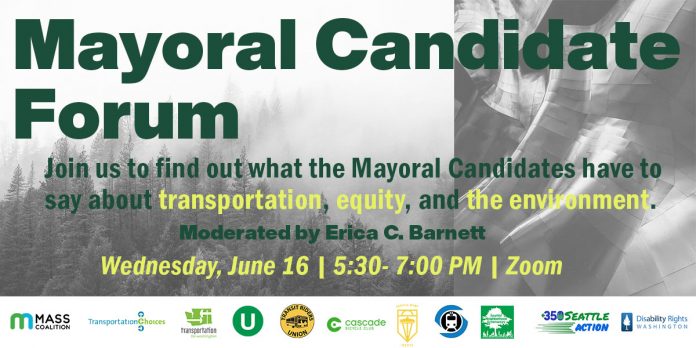 On Wednesday, Seattle Mayoral candidates will square off in a forum centered on transportation, equity, and the environment and hosted by the Move All Seattle Sustainably (MASS) Coalition and allies. The Urbanist is a member of MASS and is helping put on the online event. Erica C. Barnett of Publicola is moderating the forum.

Confirmed candidates include Jessyn Farrell, M. Lorena González, Bruce Harrell, Andrew Grant Houston, and Lance Randall. Unfortunately, Colleen Echohawk has a conflict because it is graduation day for her son and cannot attend, but we will read a statement from the campaign outlining their thoughts on our forum focus areas. Casey Sixkiller also has a scheduling conflict.

Many candidates in this race have been putting out interesting ideas around transportation, housing, and social justice. We hope to dig into the details. The Urbanist has also covered the major candidates via interviews.

One popular concept this cycle has been 15-minute cities, which is the idea that people should be able to meet all their basic needs — groceries, healthcare, childcare, hair care, restaurants, and cafe — within a 15-minute walk or bike ride of their home. Another popular touchstone is missing middle housing — triplexes, fourplexes, cottage clusters, rowhouses, small apartment buildings, and so forth — that could be unlocked in single-family zones with zoning reform. We’ll see how candidates plan to make their particular visions of each a reality and how they fit together.

The event will be virtual, available through Zoom or Facebook live. Captioning will be available, and American Sign Language translation is available upon request. The recording and transcript will be available after the event. Sponsors included 350 Seattle Action, Cascade Bicycle Club, Seattle Neighborhood Greenways, Seattle Subway, Sunrise Seattle, Transportation for Washington, Transit Riders Union, and The Urbanist.

Register for the Zoom link here.

Update: An earlier version of this article listed Casey Sixkiller as a confirmed candidate due an initial RSVP, but we’ve since learned they have a scheduling conflict and cannot attend.