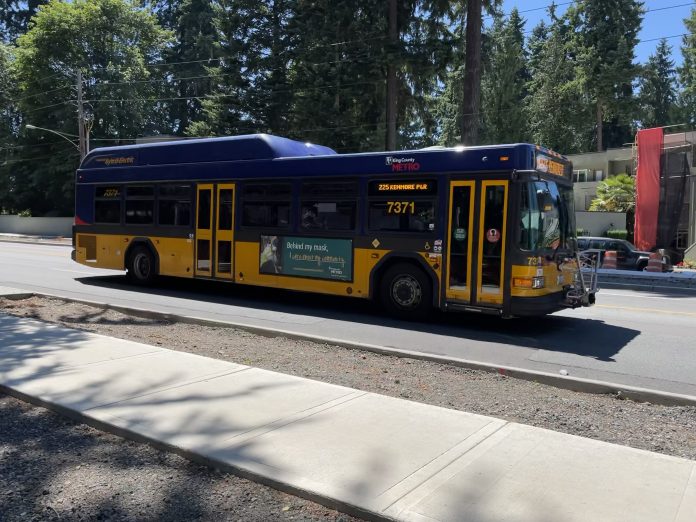 King County Metro has announced service improvements for six bus routes on the Eastside. About 150 weekly trips will be added to Routes 208, 225, 226, 241, 250, and 255 starting on Saturday, June 26th. Metro has quietly been adjusting service throughout the pandemic where demand has warranted it. Usually though, the agency makes service additions in March and September — or as the case is this year, because of Northgate Link opening, in October — but the pandemic is receding as vaccination rates have gone up in recent months, encouraging transit riders back to buses.

“With vaccination rates reaching 70% and climbing, we want to expand travel options as quickly and safely as possible,” King County Executive Dow Constantine said in a statement. “Adding trips on these Eastside routes delivers service to diverse areas, and connects people to jobs, education, and all this region has to offer.”

Metro has said that the service restorations on these routes were forthcoming in the fall, but a confluence of factors have made now an ideal time to move forward with them. One factor is freed up capacity elsewhere in the bus system because of less restrictive passenger limits that went into effect in April. This was possible because of improving Covid vaccination rates, which allowed Metro to reduce the number of supplemental buses on routes. Another factor is that the routes ranked well under restoration criteria, those being the opportunity and jobs scores for priority populations.

The agency is still down from its pre-pandemic service level highs. In the fall, Metro had stalled out at about 85% of pre-pandemic service levels, but that was better than originally predicted. Federal aid and improved revenues have made the financial situation more stable such that Metro can afford to restore service. In fact, the March service restored 11,000 weekly trips, leaving Metro about 400,000 annual service hours short of pre-pandemic levels. The agency has made modest adjustments where needed during the intervening months. In October, Metro is poised to add back another 200,000 annual service hours in the fall service change, cutting that deficit by about half, and implement the Northgate Link bus restructure.