A bank of photojournalists lining the platform, their cameras a symphony of clicking and whirring. Bagpipes squeezing out a mournful tune. Protestors pressing forward, signs in hand. As I stepped off the train in Glasgow on October 30, the energy and urgency of COP26 was palpable. Like the days that would follow, this moment of arrival was equal parts summit, protest, and festival.

I was invited to attend COP26 as part of a delegation from the American Institute of Architects (AIA), a UN-recognized observer to the climate summit. It was AIA’s first engagement with COP, and a tremendous learning opportunity. Our primary purpose: urge countries to include aggressive action for buildings and cities in their Nationally Declared Contributions to carbon reduction (NDCs).

Billed as our “last best hope” to limit global warming to 1.5 degrees Celsius, COP26’s serious stakes were evident to me in the thousands who took to the streets, the expectations of negotiators and the ambition of non-state actors from almost every sector of the economy. Chance meetings with officials from countries like Burkina Faso, Pakistan and Fiji put a face to the real and present impacts of climate change and the urgency that Least Developed Nations (LDCs) feel for action and investment from Europe and the US.

Hundreds of events at the official COP venue and across the city served as a master class on our climate and biodiversity crises. And arts events, including a Patti Smith concert and the premiere of The [uncertain] Four Seasons, tapped into human creativity and story-telling.

Here are a few of my personal observations and key takeaways:

Commitments aren’t action, but they are still reason for hope.

COP26 saw a flurry of new commitments, across multiple sectors of the economy, addressing critical issues like deforestation, methane emissions and finance. Some activists pronounced such commitments dead on arrival — “blah blah blah.”

But where some saw empty words, others saw hope. These commitments “set the stage for the big turnaround we were waiting for,” said White House Climate Advisor Gina McCarthy at a discussion hosted by Harvard afterwards. John Kerry, speaking at a C40 Cities event, noted: “This COP has more energy and enthusiasm than there has been at any other COP. Something’s different. We are going to have the greatest increase in ambition we’ve ever had.”

This step up in ambition of course must be followed by immediate and comprehensive action, but COP26 played a critical role in bringing government and non-state actors together to share both strategies and inspiration. Seeing 25,000 people from around the globe and across all sectors of the economy, laser focused on how to address our climate and biodiversity crises, made it clear that environmentalism is now an unstoppable force.

Within the building sector, AIA joined Architecture 2030 and dozens of organizations and firms signing a 1.5°C COP26 Communiqué to government leaders challenging them to step up their emissions reduction targets for the built environment. Royal Institute of Architects (RIBA) released Built for the Environment, a deep analysis of the contributions buildings make to our climate and biodiversity crises, and the built environment strategies countries should be including in their NDCs. The Net Zero Carbon Buildings Commitment now has more than 150 signatories, including businesses, cities and states.

Every job is a climate job.

The sprawling COP26 venue felt like an ant hill: the feverish activity of thousands of individual actors, each working independently, all building to a comprehensive whole. Financiers, manufacturers, designers, and mayors; Indigenous leaders, young people, and representatives from the Least Developed Countries Group; leaders from Nike, Pepsi, and Microsoft. The breadth of disciplines and experiences actively involved in COP brought into sharp relief the critical importance of non-state actors.

Over the coming decade, ecological and climate literacy will be a core competency for any job. While government leadership is important, the most promising change is happening horizontally, not vertically.

Practitioners in the built environment have long focused on the leading indicator of carbon emissions and the actions necessary to reduce or eliminate operational and embodied carbon. A broader understanding of ecological systems and global warming, and the impact of extractive practices on habitat, biodiversity, and fragile ecosystems, however, has not generally been a feature of architectural training. AIA is now considering new programs to promote climate literacy as a fundamental component of professional education.

The scale of necessary change is sobering.

While there was buzz at COP about the role of innovation, McCarthy emphasized that we have “concrete technologies that can be deployed today at scale.” First Nations Chief Dana Tizya-Tramm, Vuntut Gwich’in, Yukon Territory, noted in a COP program on Indigenous energy projects: “The land is the ultimate technology. What nature teaches us is the power of banking on diversity and collaboration.”

The heavier lift will be reinventing our relationships to consumption, growth, nature and most importantly each other. Listening to sessions on topics such as circular economy, Indigenous leadership and rewilding our landscapes made it clear that the scale of change will be more disruptive than we are ready to imagine.

This is certainly true in the building sector. At a pre-COP summit hosted by RIBA, Julian Allwood of Cambridge University warned of “phony techno-optimism,” reliance on not-yet-invented technologies to solve commitments we are making today. He spoke in stark terms about challenges such as severely constrained materials supplies, elimination of concrete, and primary reliance on our existing building stock. Almost no one in the industry is yet discussing such potentialities.

Attending COP26 gave me many reasons to hope, but also a much broader understanding of the nature and scale of the challenges we face. I came home with an even greater respect for distributed effort and interdisciplinary collaboration. Individual resolve is clearly inadequate to address the challenges we face, and national governments have struggled to take bold and comprehensive action. The bedrock of progress, I believe, will be the human connections we build within our professional communities, cities and neighborhoods, community groups, and across civil society. 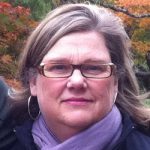 Lisa Richmond is currently taking a gap year, using her time to accelerate her work on climate change.  As Executive Director of AIA Seattle for the past 15 years, she helped lead the association’s national agenda on climate.  She is an Architecture 2030 Senior Fellow, a certified leader with Al Gore’s Climate Reality Project, and a Loeb Fellow at the Harvard University Graduate School of Design.