Even headed into a recession, the Unified Care Team budget for police-assisted homeless sweeps keeps growing.

By the end of 2022, the City of Seattle will have spent $5.8 million on permanent housing for unhoused residents and $15 million just on encampment removal teams. While only a measly 5% of the Unified Care Team member budget goes towards social workers to help unhoused residents find resources, 15% (over $2 million) go towards police, not to mention the tens of millions of dollars (the other 80%) spent on the parks and utilities department employees present to aid the police in disposing of personal property. Mayor Bruce Harrell has proposed to augment this in the 2023 budget, and the city council appears to be going along with it.

Witnesses from the public and the media have watched as countless sweeps bring in dozens of SPD officers (even during periods of “limited staffing”) to stand around, chat, and play witness to the worst day of many of the encampment residents. At best, they are there to block mutual aid activists from aiding residents. At worst, they hassle residents, using force to remove their belongings.

Whether or not SPD is actively arresting encampment residents or just helping in the shuffle, extensive qualitative research has shown that police interactions with unhoused populations very frequently result in the perpetuation and prolonging of homelessness.

In one recent San Francisco survey of unsheltered homeless individuals, 69% of respondents had received a move-along citation within the past year, for which the vast majority could not pay. For individuals residing in parks and on the street, nearly 90% had been cited. This led to a variety of outcomes for respondents, primarily putting them into debt and frequently disqualifying them for certain federal benefits.

A similar study conducted in Colorado found that 70% had received citations, and the increase in enforcement had had detrimental effects on the quality of life of the vast majority of respondents. The same study also found that while many of the unsheltered individuals had begun seeking out shelter beds more frequently, almost 75% of them had experienced being turned away at least once. Moreover, 66% of the respondents’ only change in sleeping behavior was to find more isolated locations, further from resources, but where they were less likely to have a police interaction.

So not only are residents receiving citations that put them into debt, they are also forcibly moving away from essential resources like bathrooms and warming shelters, in order to avoid further citation.

Sweeps funding would be better spent on housing

The Harrell administration’s proposal to increase the Unified Care Team budget by 62% in 2023, while maintaining the police budget for encampment responses, is only going to worsen the crisis we see in Seattle today. After this week’s budget vote, it appears as though this will be maintained in the final budget, reinforcing the vision of policing as the answer to homelessness. As long as that is true, the population of unhoused individuals will only increase throughout the city.

This is why it is essential that we decriminalize homelessness and finally remove cops from the encampment response equation. With the amount of money proposed to hire the police and their helpers to destroy lives in 2023, about 50 units of permanent supportive housing could be built. So the city has to ask itself, why do we continue to worsen our homelessness crisis with policing, and when will we finally start to make an improvement with housing? 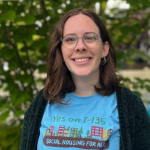 Camille Gix is a graduate student at the University of Washington's Evans School of Public Policy and Governance focusing on social policy analysis and housing studies. She also works with the advocacy team at Real Change primarily doing research and writing for policies aimed at bringing social housing to Seattle. She serves on the steering committee for House Our Neighbors Initiative 135 for Social Housing.