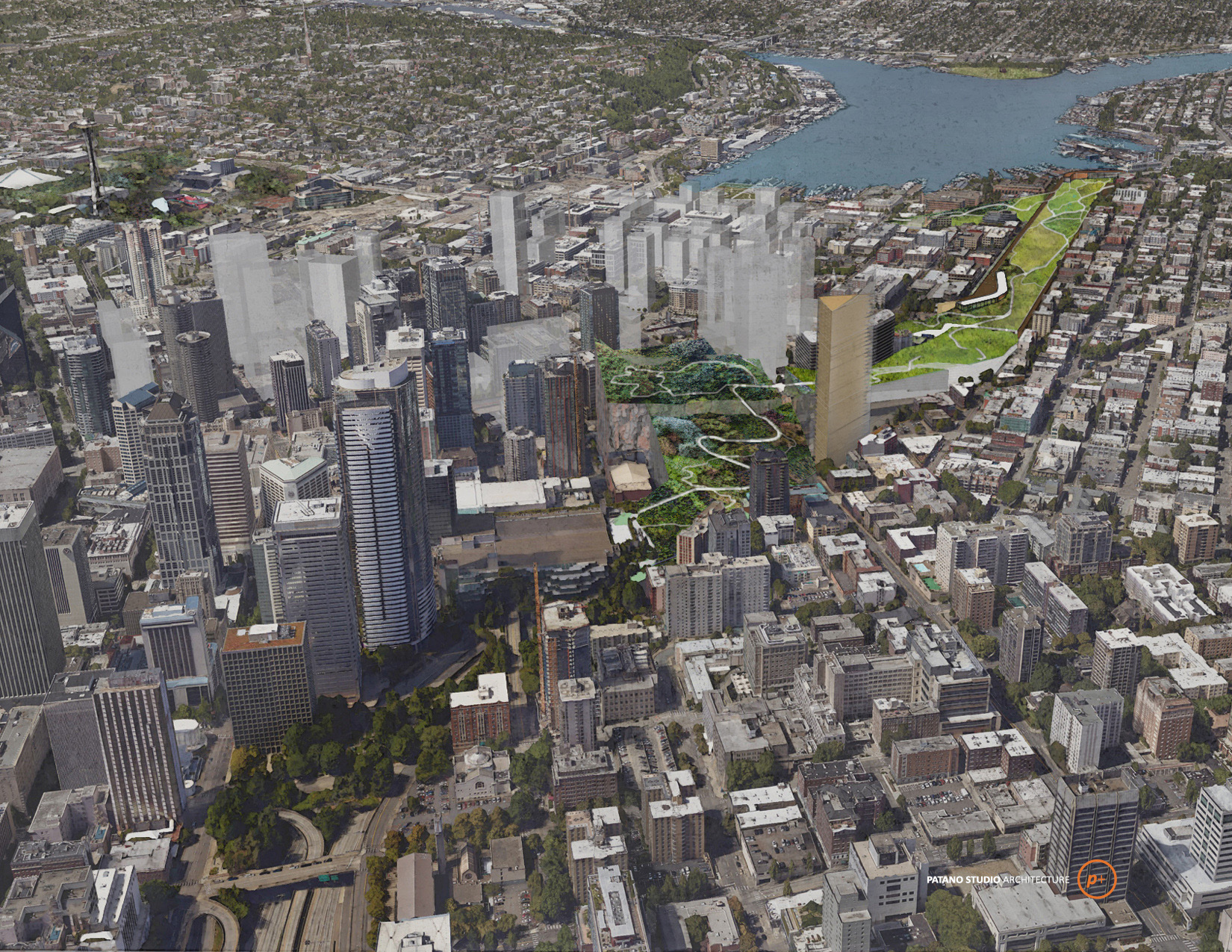 Capitol Hill Seattle Blog recently covered architect Christopher Patano’s plan to put a “lid” on I-5 through a two-mile segment, alongside First Hill and Capitol Hill to create a linear park. It’s an exciting idea. Obviously, it would be very expensive and require a huge political lift. But let’s discuss its merits. I’ve covered the damage freeway construction did to urban neighborhoods; this is one way to mitigate that damage without sacrificing highway capacity.

Scott Bonjukian covered this idea last year, conducted graduate research on an I-5 cap, and just revealed his findings in a four-part series (1, 2, 3, and 4). Bonjukian’s latest plan calls for an 8.4-acre expansion of the existing Freeway Park between Olive Street and Madison Street. He projected a $250 million price tag for this expansion.
Patano insists on deflecting the question of cost for now, but Bonjukian earlier studied a longer option that went 2.5 miles from Galer Street all the way to Yesler Way, and he estimated a freeway cap that length would cost $2 billion. It would seem Patano’s full proposal would cost at least that much.

That hefty price tag could be partially offset by selling off some of the land parcels created over the freeway trench. Bonjukian estimated that the land created in those choice neighborhoods could be worth roughly $18.1 million per acre. Meanwhile he estimates the cost of the freeway cap at $20 million to $30 million per acre, based on similar projects in Dallas, Philadelphia, and the Freeway Park project in Seattle.

If land values continue shooting up, one could see land values surpassing the cost of creating that land with a freeway cap. Of course, some acreage would have to be set aside for cross streets, the parkway, and potentially a full scale park.

There is also the caveat that developers would be hindered in how high they could build over the freeway cap and prevented from digging their beloved underground parking garages. That would likely lower the land value. However, even low-rise parcels could have very high value. Plus, the lid could be engineered to support mid-rise buildings; it would just have to be further reinforced, which is expensive, but the increased costs could be covered by a developer wanting the extra height.

Moreover, the freeway cap could present a unique opportunity for the city to guide positive urban design in a way it rarely has the power to do. Instead of lamenting limited parking opportunities, the city would create a car-light, mixed-income zone with fantastic access to a newly created bicycle and pedestrian trail, not to mention frequent transit. I expect further cost savings might be realized by integrating foundation work into the freeway cap construction so that wood apartment buildings could go up quickly. Not having to dig parking ramps saves time and money. The apartments could be targeted at low and middle income tenants without cars and looking to take advantage of the new bike trail and great pedestrian access to Downtown and Capitol Hill.

Bonjukian did not recommend housing on or near the freeway lid due to concerns about air pollution. Tenants in a building over a freeway cap in Manhattan had also complained about noise and vibrations. A location atop a freeway is far from ideal. However, many buildings across the city abut the freeway and yet are not condemned. Long term, we can also predict or at least hope for the electrification of the US auto fleet and that should drastically reduce pollution emanating from our highways. Perhaps electric cars and trucks would also cut down on noise pollution. The freeway topping buildings could be outfitted with noise proofing and more robust air filtration systems. As for vibrations, I’d argue if it’s good enough for a coffee shop, it’s good enough for an apartment.

An overarching lid plan such as Patano’s could be done in sections. However, once the low hanging fruit are completed nearer Downtown (where I-5 is in a trench), a northward expansion would require more significant engineering and probably a lengthy closure to engineer a more complicated cap, such as encasing the freeway in a seven-story structure like in the rendering. It appears apartment or hotel units are built right into the structure, which might work but doesn’t exactly make for very enticing real estate.

Patano’s vision for the northern half of the linear park is reminiscent of the much ballyhooed High Line in New York City that it seems just about every city now wants to copy (and which New York copied from Paris’ Plantee Promenade). Park space several stories up in the sky is a nice novelty but it’s hardly central to good urban design. High Line replicas run the risk of being exorbitantly expensive, underutilized flops. The High Line works well in New York because the surrounding neighborhoods are quite dense, and the park catalyzed redevelopment that, to believe the boosters, wouldn’t have otherwise have happened in the up-and-coming Chelsea neighborhood of Manhattan. The elevated park also draws a large number of tourists.

If your city doesn’t have redevelopment opportunities or a serious shortage of park space and tourist attractions near its planned elevated park then it might just be a vanity project. Unfortunately spending billions of dollars to build a High Line-like park on top of I-5 between Eastlake and Capitol Hill might fall into that category.

On the other hand, Bonjukian’s extensive research has demonstrated the many benefits of a Downtown lid, which I believe outweigh the costs manifold. Capping the freeway Downtown would provide a marked improvement to the public realm in this neglected area of the city and hopefully allow additional blocks to be developed to relieve some of the housing pressure in Seattle. Plus, there is always the possibility that the much anticipated often delayed I-5 rebuild (to rejuvenate the decrepit freeway down to its foundation) will make capping a wider swath of I-5 feasible.